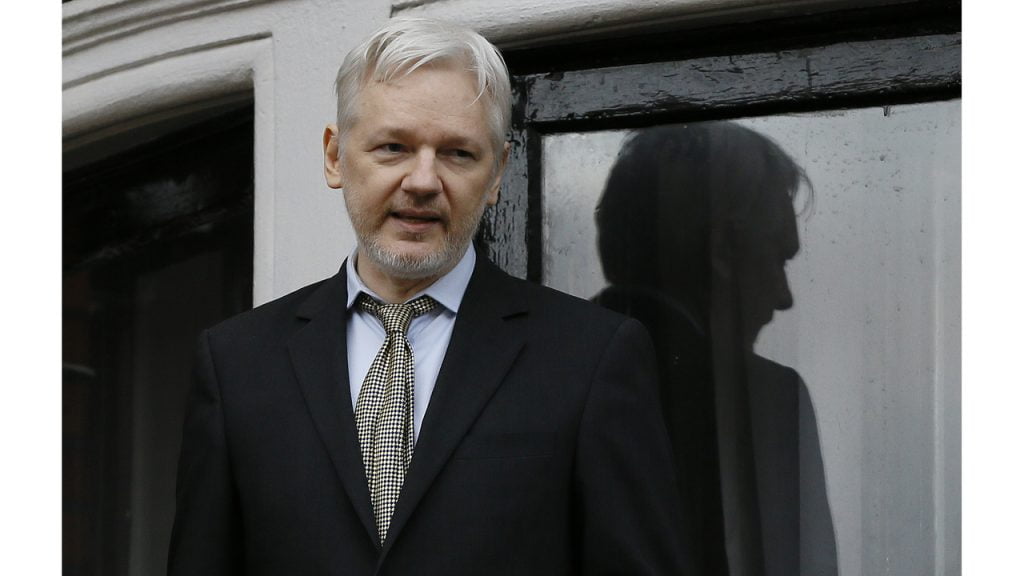 Following seven years of imprisonment at the Ecuadorian embassy fighting US extradition, WikiLeaks founder Julian Assange has been sentenced to 50 weeks behind bars for an entirely bogus bail charge.

Sky News reporter Jordan Milne live-tweeted events as they unfolded, reporting that Assange’s defense argued that his fears of rendition and torture at the hands of the US government were well-founded. His life in the Ecuadorian embassy and the physical and psychological detriments which came with it were described, including deteriorated health and depression. The judge rejected his entire defense and delivered nearly the harshest sentence possible.

“Your continued residence in the Embassy has necessitated a concentration of resources, and expenditure of £16 million of taxpayers’ money in ensuring that when you did leave, you were brought to justice,” Judge Deborah Taylor told Assange upon his sentencing.

This is bulls*it. Assange’s residency at the embassy never cost taxpayers a penny; it was the British government’s decision to pour money into patrolling the embassy around the clock with police who had orders to arrest Assange on sight over a petty bail charge. It was the British government’s decision to persuade the Swedish government not to drop its investigation in 2013 so that it could pursue the agenda to arrest Assange for US extradition.

Assange’s residency didn’t cost British taxpayers anything; the agenda to imprison and extradite a journalist for publishing facts is what cost taxpayers £16 million. There is one reason and one reason only that the British government saw fit to spend £16 million of taxpayers’ money patrolling that embassy, and it wasn’t because they really, really hate bail violations.

No, the one and only reason the UK government found it reasonable to invest £16 million in patrolling the Ecuadorian embassy is because it had an agenda to help the US war machine punish someone who embarrassed it. And now the cost of that UK government agenda is being used to justify nearly a year behind bars after years of arbitrary detention.

Julian Assange’s sentence, for seeking and receiving asylum, is twice as much as the sentencing guidelines. The so-called speedboat killer, convicted of manslaughter, was only sentenced to six months for failing to appear in court.

“Julian Assange’s sentence, for seeking and receiving asylum, is twice as much as the sentencing guidelines,” WikiLeaks tweeted. “The so-called speedboat killer, convicted of manslaughter, was only sentenced to six months for failing to appear in court.”

The bail charge itself is entirely illegitimate. As scholar and WikiLeaks advocate Simon Floth explains, under British law bail is only legally breached if there’s a failure to meet bail “without reasonable cause”, which the human right to seek asylum certainly is. The UK itself was clearly unconvinced of its own authority to charge someone who was under political asylum for jumping bail, waiting a full nine days before issuing an arrest warrant in 2012.

After the Swedish government decided to drop its sexual assault investigation in 2017 without issuing any charges, Assange’s legal team attempted last year to get the warrant dropped. The judge in that case, Emma Arbuthnot, just happens to be married to former Tory junior Defense Minister and government whip James Arbuthnot, who served as director of Security Intelligence Consultancy SC Strategy Ltd with a former head of MI6. Arbuthnot denied Assange’s request with extreme vitriol, despite his argument that British law does have provisions which allow for the time he’d already served under house arrest to count toward far more time than would be served for violating bail.

Julian Assange’s sentence is as shocking as it is vindictive. We have grave concerns as to whether he will receive a fair extradition hearing in the UK.

All this of course pales in comparison to the far more grave threat Assange faces tomorrow, when his hearing for US extradition begins.

The US charge accompanying Assange’s extradition request is even more bogus than the bail charge; a re-interpretation of standard journalistic practices like source protection to create a charge which the Obama administration declined to prosecute based on the same evidence for fear of endangering press freedoms. Assange is charged with “conspiring” to help Chelsea Manning avoid detection while leaking evidence of US war crimes and malfeasance, which is something any investigative journalist who publishes leaks would do. The charge is a bunch of words designed to twist standard journalistic practices into just enough of a crime to get Assange onto US soil for “non-political” reasons.

As Pentagon Papers lawyer James Goodale explains, “Under the U.S.-U.K. extradition treaty, one cannot be extradited from the United Kingdom if the extradition is for ‘political purposes.'” Once he’s on US soil, far more serious charges may be added that are of a very political nature indeed. If that happens, Assange will not be spending the five years behind bars for computer offenses that his current charge allows, he’ll be spending decades.

“I don’t think Julian is looking at five years in prison, I think he’s probably looking at 50 years in prison,” said CIA whistleblower John Kiriakou, adding, “I think that there are many more charges to be considered for Julian. I would expect a superseding indictment, possibly to include espionage charges.”

There is simply no such thing as a fair trial in the Eastern District of Virginia, which is where Assange will be heading if extradited to the US.

“No national security defendant has ever won a case in the EDVA,” Kiriakou told RT upon Assange’s arrest. “In my case, I asked Judge Brinkema to declassify 70 documents that I needed to defend myself. She denied all 70 documents. And so I had literally no defense for myself and was forced to take a plea.”

“He will not, he cannot get a fair trial,” Kiriakou said on a Unity4J vigilwhen Assange was still at the embassy. “It’s impossible, because the deck is stacked. And everybody knows what’s gonna happen if he comes back to the Eastern District of Virginia. This is the same advice I gave Ed Snowden: don’t come home, because you can’t get a fair trial here. Julian doesn’t have the choice, and that’s what frightens me even more.”

This is why it’s imperative for everyone who stands for truth, press freedoms or government accountability to oppose this extradition request tooth and claw, wherever they’re at in the world. Australians should be pushing their government to intercede against US extradition, Britons should be doing the same, and Americans should be pushing their government not to extradite. It’s too late to keep Assange from being pried loose from the embassy and imprisoned by the UK, so now we need to put all our energy into keeping Assange out of the clutches of the same government which tortured Chelsea Manning.

Go to demonstrations, make phone calls to your local representatives, donate get posters spread around Australia, write letters to the editor, and share information about what’s going on with your friends and family and anyone you can. We can’t rely on the legal system to sort this one out, because, as we’ve seen today, the legal system can very easily be manipulated to serve the interests of the powerful.