Prepare For Change
Home Awakening ‘This doesn’t look like the best economy ever’: 40% of Americans say... 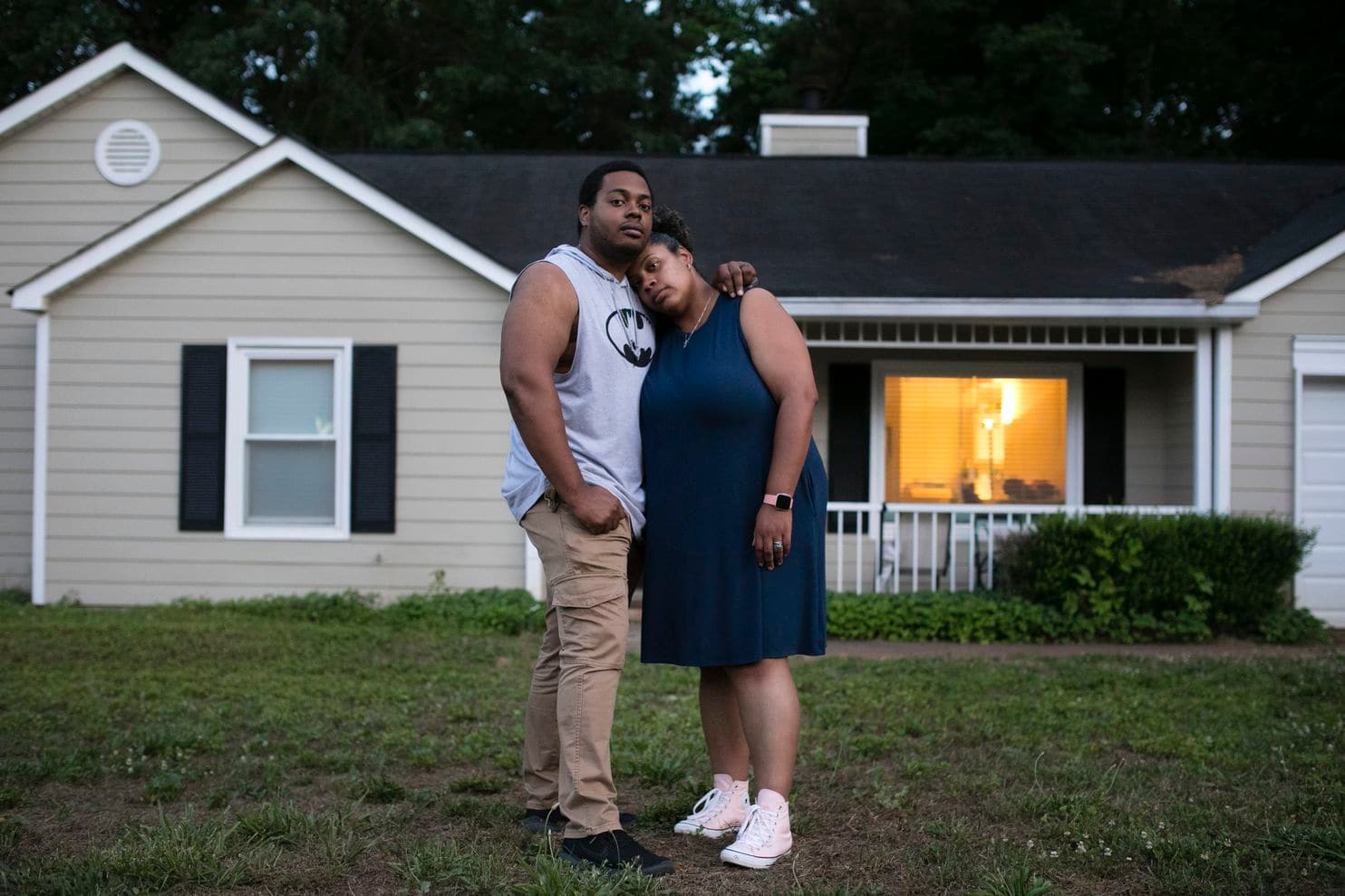 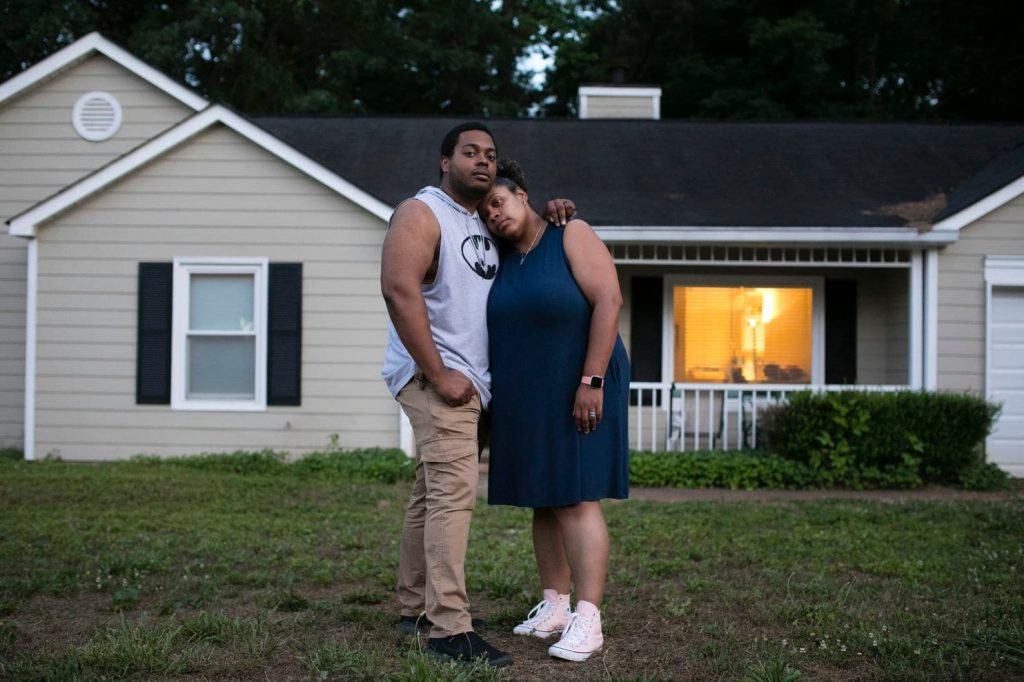 Sommer Johnson thought everything was finally coming together for her last year. She was engaged, working full time and doing well in online college classes when her fiance’s mother died a week before their wedding day — triggering a series of large and unexpected expenses that left her struggling to pay her bills and brought her to the verge of bankruptcy.

“I keep hearing this is one of the best economies we’ve ever had and unemployment is down, especially among African Americans, which I am,” said Johnson, 39, who lives in Douglasville, Ga., an Atlanta suburb. “I’m looking around going, ‘Where is this boom?’ From where I sit, this doesn’t look like the best economy ever.”

The economic expansion this week became the longest in U.S. history, surpassing the 1990s boom, which lasted exactly a decade.

The stock market is at record levels, with the Dow Jones industrial average closing at a new high Wednesday ahead of the July 4 holiday, and President Trump has made the economy’s strong performance a centerpiece of his reelection campaign.

But this expansion has been weaker and its benefits distributed far more unevenly than in previous growth cycles, leaving many Americans in a vulnerable position.

This is a “two-tier recovery,” said Matthew Mish, head of credit strategy at the investment bank UBS. About 60 percent of Americans have benefited financially, he said, while 40 percent have not.

The 40 percent — which Mish calls the “lower tier” — have seen paltry or volatile wage growth, rising expenses for housing, health care and education, and increased levels of personal debt. They tend not to own homes or many stocks.

In discussions with 30 Americans unable to pay all of their bills, a clear pattern emerged: Most were able to eke by until they faced an unexpected crisis such as a job loss, cancer, car trouble or storm damage.

The extra expense caused them to get behind on their bills, and they never fully rebounded.

Economists fear such precarious financial situations put many Americans at risk if there is even a mild setback in the economy, potentially setting up the next recession to be worse than anything in recent history except the Great Recession.

“So many Americans are living paycheck to paycheck,” said Signe-Mary McKernan, vice president of the Center on Labor, Human Services and Population at the Urban Institute. “We are headed toward a political crisis, if not an economic one.”

Their vulnerability is due to a confluence of factors. First, the average American family has yet to recover fully from the 2008 financial crisis, the Federal Reserve found, leaving half the nation with a diminished cushion to handle surprise expenses — or the next downturn.

The bottom half has less wealth today, after adjusting for inflation, than it did in 1989, according to Fed data through March of this year.

While wage growth has accelerated in recent months, especially for the lowest-paid workers, families who have struggled for years have a ways to go to return to solid footing. 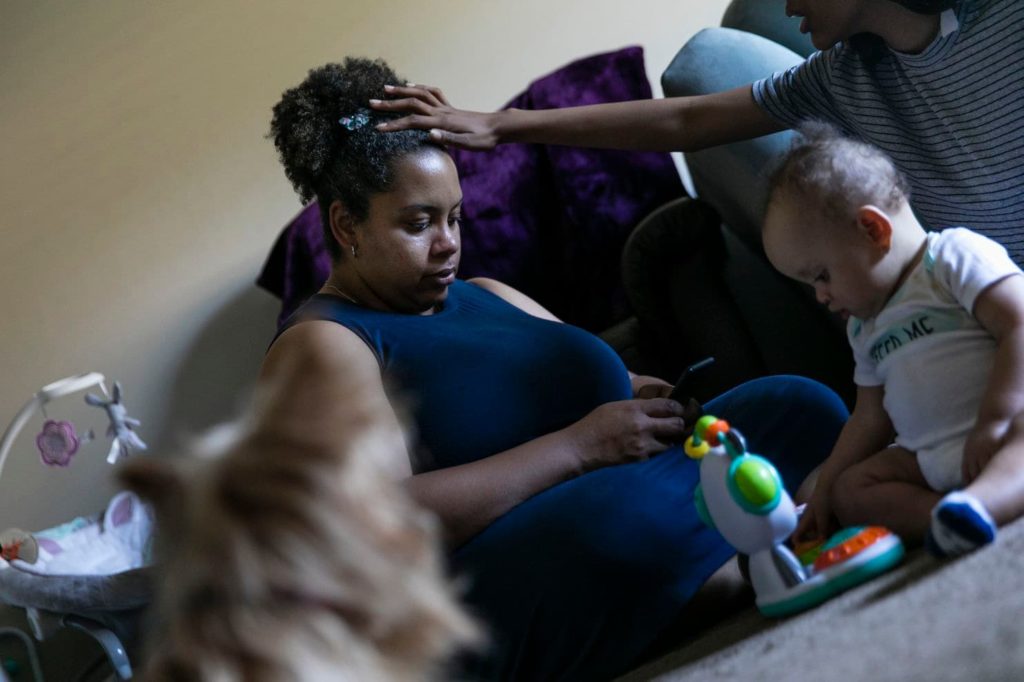 Sommer Johnson works a full-time job, takes online classes toward a degree in business administration and is a mom to two teenagers and an infant. (Elijah Nouvelage for The Washington Post)

Trump and his team argue that a strong economy is lifting more and more Americans up financially, including blue-collar workers, the formerly incarcerated and minorities. In contrast, Democrats are calling for major expansions of government programs to address inequality. How to help the economically vulnerable is likely to be a key debate in the 2020 race.

“Just because folks on Wall Street think things are fine doesn’t mean most Americans feel like things are fine,” said Ray Boshara, director of the Center for Household Financial Stability at the Federal Reserve Bank of St. Louis. “When every day is a rainy day for millions of families, things are not fine.”

To get by, Americans have borrowed heavily in recent years. Total U.S. household debt is now $13.7 trillion, surpassing the 2008 peak in dollar terms, according to the Federal Reserve Bank of New York. The surge in debt this time around is for cars and college, not mortgages.

Johnson knows these issues all too well. Her family of five — including two teenagers and an infant daughter — was making it on her $31,000 salary as an insurance underwriting assistant and her husband’s part-time job as a clerk. But it took longer to sell her mother-in-law’s house than the couple expected.

The modest life insurance policy the couple collected on her death soon ran out, but the bills — for the funeral, carrying the extra house, rent, health insurance and the new baby — kept coming. Johnson’s husband, Carl Dunlap, has applied repeatedly for full-time jobs but has not been able to get one. He picked up as many extra hours as he could at work, but it wasn’t enough.

Already in debt for college and a used Volkswagen Passat she bought in 2017, Johnson turned to friends and family for help. But she eventually had to choose between paying for day care and the $350-a-month auto loan. She picked day care, and her family lost a vehicle.

She recalls the exact moment it happened: 10 p.m. on a Thursday night in early March. She saw the red flashing lights of the repo men through her living-room window and ran outside barefoot.

“I just stood there and watched it go, which was tough,” Johnson said. “That was the first car I ever bought for myself, and we needed it.” 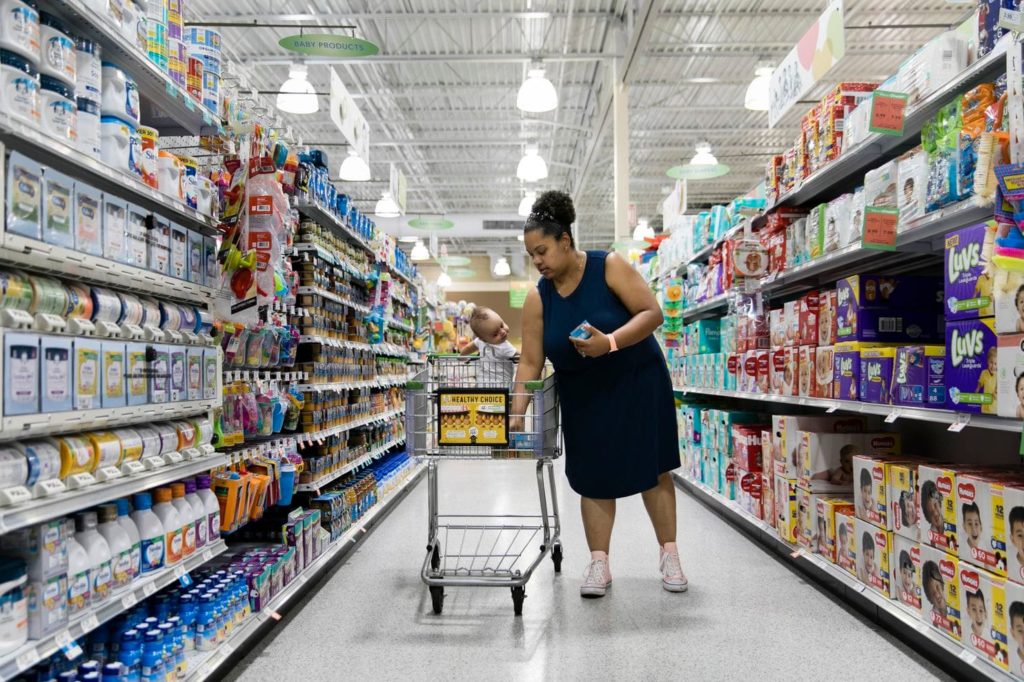 Johnson shops with her daughter Harmonii in Douglasville. (Elijah Nouvelage for The Washington Post)

The couple carpool to work now, trying to save money to pay the thousands of dollars they still owe on the VW that is no longer in their possession.

Older and wealthier — and usually white — Americans typically take on debt to buy homes or make investments that are likely to make them richer in the years to come. Most in this category have recovered the wealth they lost in the Great Recession as home prices and stocks have soared.

In contrast, data from the Fed and the credit-score company Equifax show that families of color, Americans born after 1970 and households earning less than $60,000 are the least likely to have recovered the wealth they lost in the crisis. And they tend to carry heavy debt loads, often taking out loans for college, which they cannot get rid of in bankruptcy, or loans to pay bills, which can put them further behind.

The prevailing view among Wall Street investors and Washington policymakers is that there is little to worry about because student loans are backed by the government and delinquency rates for other kinds of debt are fairly low, meaning most people can make their monthly payments.

“Credit quality is about as good as I’ve ever seen it,” said Mark Zandi, chief economist at Moody’s Analytics. “There is nothing that suggests inordinate stress on low-income households . . . certainly nothing compared to times past.”

But Boshara, of the St. Louis Fed, pointed out that credit card and auto loan delinquencies have risen this year, the opposite of what Wall Street expected in good economic times.

Four in 10 Americans say they still struggle to pay their bills, despite the strong economy, according to a quarterly survey by UBS that has shown no improvement since 2014. And looking at how households are doing by class, race or age reveals a concerning picture.

For Maddy Dannemiller, who lives outside Columbus, Ohio, the tipping point came when her then-boyfriend hit a deer while driving her car.

The vehicle was badly damaged, and the couple decided it was not safe enough for their children, prompting her to buy another.

Her monthly payment jumped to over $450 a month because she didn’t have a credit history. (Dannemiller’s late mother had co-signed the loan on her first car.)

Then the couple broke up, and Dannemiller says she is supporting three children on her own.

As a nurse’s aide, she makes above Ohio’s $8.55-an-hour minimum wage but not much over $10. Her landlord is a relative who sometimes gives her a break on rent, but she is routinely late on car and credit card payments.

“I’m 25, but I feel like I am in my late 30s,” Dannemiller said, shortly before heading to work. “Right now, I’m two months behind on my car payment.” 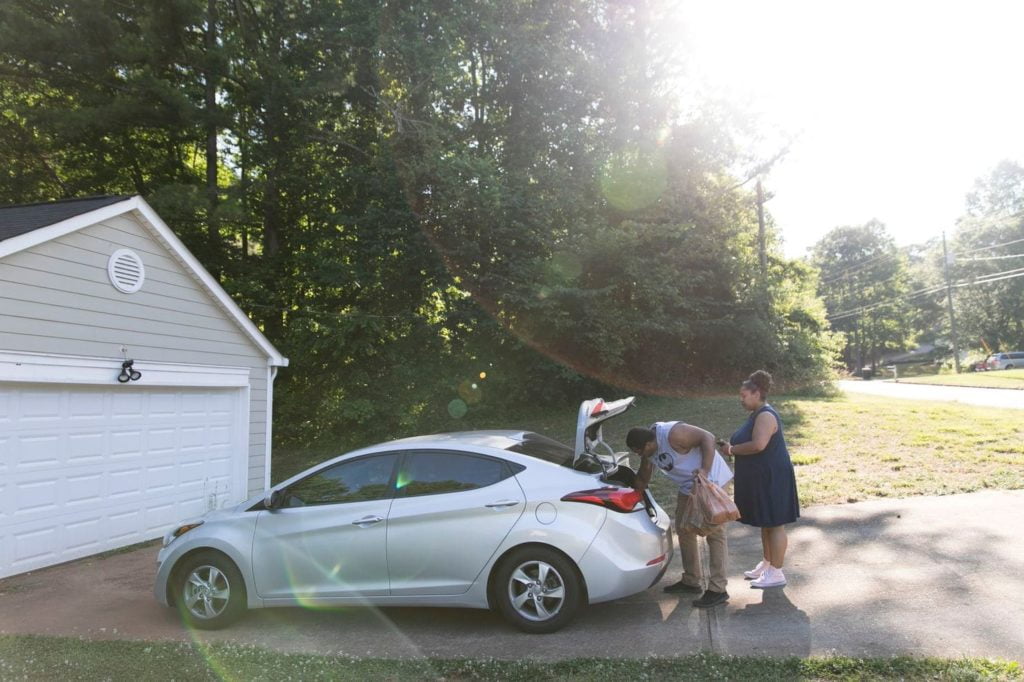 Carl Dunlap and Sommer Johnson remove groceries from their car in Douglasville. Their other car was repossessed. (Elijah Nouvelage for The Washington Post)