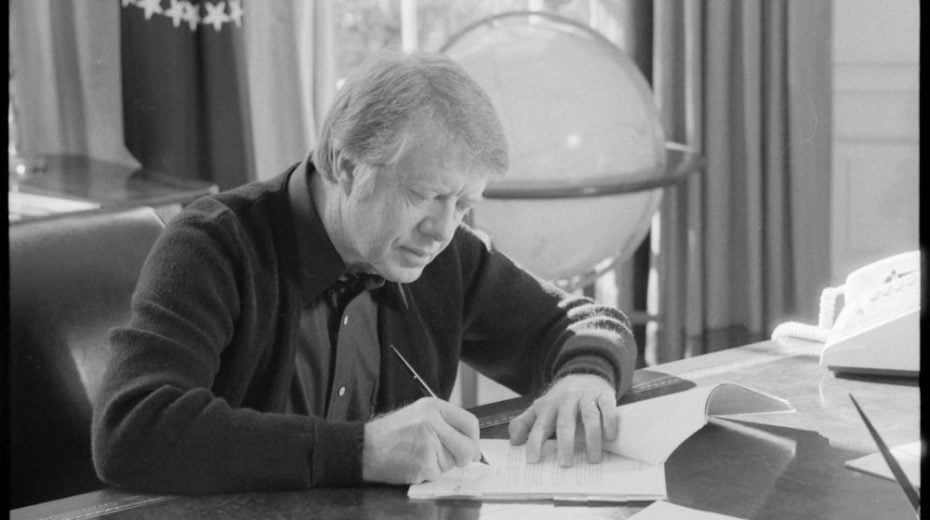 Until recently I had believed like many that Jimmy Carter is not your typical politician. Standing out from the vast array of sellouts and establishment hacks, the ex-President has often appeared as the lone voice of reason in America’s establishment calling out the injustices of American military, the wrongs of the Zionist lobby and the self-destructive nature of the American oligarchy. Surely a man who speaks so candidly cannot be bad.

While I believe Carter probably has good intentions, I also believe that the man is likely just as clueless today as he was when he was used as a puppet by those forces now identified as the international Deep State which took over American foreign and internal policy during his 1977-1981 presidency.

Under Carter’s reign, an organization which grew out of the combined influence of the Council on Foreign Relations and Bilderberg Group took over America under the name of the Trilateral Commission which overturned the last remnants of anti-imperial impulses left over from the vision provided by Presidents Franklin Roosevelt and John Kennedy, converting America into the self-destructive basket case we have come to know it as today.

Since those Trilateral reforms were so all-encompassing and touch on issues of economic policy, the creation of foreign debt slavery, terrorist financing and green energy, it is worth conducting a brief assessment of how this happened while also looking at some of the key players that made it happen.

The Trilateral Commission takes over

While James Carter became America’s 39th president in 1977, the Trilateral Commission was actually created in 1973 under the nominal head of David Rockefeller III (president of Chase Manhattan Bank) and a coterie of international financiers and imperialistically-minded ideologues who believed religiously in the utopian doctrine of global governance under a master-slave ethic. The idea of consolidating three global zones of power (North America, Western Europe and Japan) during the height of the Cold War under a unified command structure was the motive behind the creation of this think tank at that time.

A leading figure in the Trilateral Commission who later became Carter’s National Security Advisor was named Zbigniew Brzezinski who referred to this agenda as the “Technetronic era” which he described in 1970 as an age involving “the gradual appearance of a more controlled society. Such a society would be dominated by an elite, unrestrained by traditional values.”Who would these specialists represent? In his Between Two Ages, Brzezinski made it very clear: “The nation-state as a fundamental unit of man’s organized life has ceased to be the principal creative force: International banks and multi-national corporations are acting and planning in terms that are far in advance of the political concepts of the nation-state”.

Senator Barry Goldwater called out this foreign beast transforming America in his 1979 autobiography With No Apologies by saying “The Trilateralist Commission is international…(and)…is intended to be the vehicle for multinational consolidation of the commercial and banking interests by seizing control of the political government of the United States. The Trilateralist Commission represents a skillful, coordinated effort to seize control and consolidate the four centers of power – political, monetary, intellectual, and ecclesiastical.”

Another American political figure then combating this foreign virus was Presidential candidate Lyndon LaRouche who prophetically wrote The Trilateral Commission’s Rapid End to Democracy on August 4, 1981 stating: “The plan is to combine the collapse of the financial system of the United States and most of Western Europe with other countries to create a ‘global crisis management’ scenario on the largest and most catastrophic scales… the financial crisis is to be used to subject the United States, among other nations so treated to a dictatorship by decree of the IMF.”

Under Brzezinski’s leadership one third of the Trilateral Commission’s members were appointed to top cabinet posts under Carter. Notable members here worth mentioning include Walter Mondale (Vice President), Harold Brown (Defense Secretary), Cyrus Vance (Secretary of State), Michael Blumenthal (Treasury Secretary), James Schlesinger (Energy Czar), Paul Volcker (Fed Chairman). Just to get across the British pedigree of this group, Brzezinski and Blumenthal were not only Bilderberg members, but 2 of the 9 directors of the Council on Foreign Relations Project for the 1980s. The CFR is the Cecil Rhodes/Roundtable Group that set up in America in 1921 to advance Rhodes’ mandate to recapture America as the lost colony and re-establish a new British Empire.

The Crisis of Democracy

In 1975, Brzezinski’s assistant Samuel P. Huntington authored a book called Crisis of Democracy as part of the Council on Foreign Relations 1980s Project that published 33 books by 10 Task Forces in order to usher in the Technetronic era. Huntington said “we have come to recognize that there are potentially desirable limits to economic growth. There are also potentially desirable limits to the indefinite extension of democracy… a government which lacks authority will have little ability to impose on its people the sacrifices which will be necessary.”

Huntington and Brzezinski conducted a foreign affairs reform that began funding radical Islamic schools and political movements beginning with the USAID-led overthrow of the Shah of Iran and the installation of the Ayatollah Khomeini in 1979. The US funding of Al Qaeda and the Mujahedeen was nominally done for the pragmatic reason of countering the Soviets in Afghanistan, however the real reason was to justify a “Clash of Civilizations” thesis that Huntington later published under the presumption that the major religions could have no peace unless a global Leviathan were created to impose order from above. This was a clear cut case of the Pygmalion effect to the extreme.

It is here noteworthy that the Shah, along with many leaders of the Non-Aligned movement were then engaged in a major struggle to break free of the neo-colonial debt-slavery structure under Anglo-American control by using their inalienable sovereign powers to cancel the unpayable debts while unleashing investments into scientific and technological progress using the post WWII “Japan-model”. Japan’s inspiring post-WWII leap from feudalism to an advanced scientific-industrial economy made its membership in the Trilateral Commission that much more important in the minds of the new Olympian gods who feared other developing nations would follow suite.

The Controlled Disintegration of the West

Two months after being appointed Federal Reserve Chairman, Paul Volcker gave a lecture in Warwick University London proclaiming “a controlled disintegration in the world economy is a legitimate object for the 1980s”.

Volcker managed this controlled disintegration by raising interest rates to 20-21.5% beginning in 1979- leaving them there until 1982 while also raising reserve requirements for Commercial banks. The effect forever crippled America’s economy with agricultural production collapsing vastly, metal-cutting machine tools collapsed by 45.5%, automobile production collapsed by 44.3% and steel production collapsed by 49.4%. During this traumatic period, small and medium enterprises were intentionally bankrupted across all sectors of the North American and European economies leaving only multinational corporations in a position to afford such interest rates. Volcker’s program paved the way for the 1981 Kemp-Roth Tax Act that opened up real estate speculation and the 1982 Garn- St. Germaine Act which de-regulated U.S. Banks and advanced the creation of universal/too-big-to-fail banking.

When it became evident that an incoming President Ronald Reagan was not favorable to the Trilateral Commission/CFR agenda- pushing for bilateral meetings with Gandhi and Mexico’s Portillo in 1981 in order to assist their industrial growth policies and threatening to fire Volcker, his elimination was quickly orchestrated. After CFR/Trilateral Commission member George Bush was placed as Reagan’s VP (ousting Reagan’s friend Sen. Paul Laxalt during a Rockefeller-run media scandal), John Hinckley- an MK Ultra psych job deeply tied into the Bush family, was deployed to carry out an assassination shooting Reagan in the chest on March 30, 1981.

Reagan never recovered from this attempt and the well-intentioned but highly malleable Hollywood star became increasingly moulded by CFR-Trilateral Commission agents in spite of his tendency to allow himself to be influenced by pro-nation state figures exemplified by his endorsement of the Joint US-Soviet plan for the Strategic Defense Initiative in 1983 (later corrupted into a unilateral doctrine by Bush Sr.)

It should not be ignored that the transformation of the American economy from a pro-industrial growth open system model into a closed system Malthusian model was also an initiative of forces controlling the Trilateral Commission.

In 1974, David Rockefeller III keynoted the Club of Rome/UN World Population Conference in Bucharest stating “There is a need to revise the concept of economic growth. Particularly in recent years, the limits of growth have come into our consciousness. The depletion of resources, pollution, and the energy crisis have made all that very clear. The character and purpose of growth must be changed.”

The agenda for a “post-industrial society” driven by a green infrastructure revolution was laid out in the July 24, 1980 Global 2000 Report that called for energy conservation, population control and environmentalism as the foundation for the new economy. Later that year, the World Wildlife Fund’s Global Conservation Strategy is published paralleling the Global 2000thesis. The WWF was headed by Prince Philip and Prince Bernhardt during this time and its vice presidents during Carter’s administration included Louis Mortimer Bloomfield whose Permindex Bureau was caught coordinating JFK’s assassination and Trilateral Commission member Maurice Strong who called for a destruction of industrial civilization in a 1990 interview.

This was not just a history lesson

What you have just read may appear on the surface to be a history report but it is much more than that. It is a future report.

It is a future report since your future is being shaped by historical forces that you need to understand if you are going to be able to choose to influence your reality in accord with those historical trajectories that are actually in harmony with the real self-interests of mankind.

The forces of progress and anti-colonialism that the Trilateral Commission sought to snuff out 40 years ago have been revived under the renewed leadership of Russia, China and a growing array of nations who want to have a future. Increasingly, nationalist forces (as confused as they may be) have arisen as an anti-technocratic movement across North America and Europe which offers nations once believed lost to the New World Order, a chance to revive their lost renaissance heritage.

The only thing standing in the way from western nations joining the Belt and Road Initiative, re-organizing the bankrupt financial system and unleashing productive credit to revive the real economy is 1) a lack of understanding of history and 2) a confused sense of the true nature of humanity, as a species above other beasts of the ecosystem- capable of constant perfectibility and creative discovery.

Anything that denies this concept humanity and natural law such as the Green New Deal should be treated as the noxious wet dream of the Volckers, Rockefellers, Brzezinskis and other Trilateral Commission zombies who had a long way to go before qualifying themselves as human.

BIO: Matthew J.L. Ehret is a journalist, lecturer and founder of the Canadian Patriot Review and the Rising Tide Foundation. He has published the report “The Time has Come for Canada to Join the New Silk Road” and three volumes of the Untold History of Canada (available on untoldhistory.canadianpatriot.org). He can be reached at [email protected].