Prepare For Change
Home ARCONTES The war in Afghanistan has reached new levels of insanity as a... 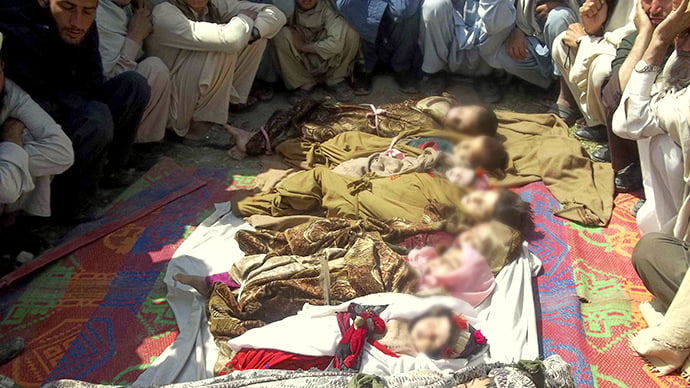 For the last several decades, the US government has openly funded, supported, and armed various terrorist networks throughout the world to forward an agenda of destabilization and proxy war. It is not a secret, nor a conspiracy theory—America arms bad guys. The situation has gotten so overtly corrupt that the government admitted in May the Pentagon asked Congress for funding to reimburse terrorists for their transportation and other expenses. Seriously. But that was just the tip of the iceberg. A new report from the United Nations shows the US and its allies in Afghanistan have killed more innocent men, women, and children than the group they claim are the bad guys, the Taliban.

The now 18-year-old quagmire in Afghanistan is raising serious questions and once again, it appears that the civilians are taking the brunt of the hit — not the ostensible enemy.

According to a report in the NY Times:

In the first six months of the year, the conflict killed nearly 1,400 civilians and wounded about 2,400 more. Afghan forces and their allies caused 52 percent of the civilian deaths compared with 39 percent attributable to militants — mostly the Taliban, but also the Islamic State. The figures do not total 100 percent because responsibility for some deaths could not be definitively established.

The higher civilian death toll caused by Afghan and American forces comes from their greater reliance on airstrikes, which are particularly deadly for civilians. The United Nations said airstrikes resulted in 363 civilian deaths and 156 civilian injuries.

“While the number of injured decreased, the number of civilians killed more than doubled in comparison to the first six months of 2018, highlighting the lethal character of this tactic,” the United Nations report said, referring to airstrikes.

Naturally, the US military calls this report by the UN anti-American propaganda.

“We assess and investigate all credible allegations of noncombatant casualties in this complex environment, whereas others intentionally target public areas, use civilians as human shields and attempt to hide the truth through lies and propaganda,” Colonel Sonny Leggett, a spokesman for the United States military, said.

The line between the ostensible “good guys” and the “bad guys” has gotten so blurred that the good guys are now openly supporting the bad while simultaneously killing more innocent people than the bad ones. It’s a story straight out of The Onion, but in real life.

While the idea of the US government paying to support terrorists or killing more civilians than terrorists may seem like a crazed notion it has become so overt in recent years that legislation was specifically introduced for the sole purpose of banning the the flow of money to terrorist organizations.

However, given the insidious history of the American empire and its creation and fostering of terrorist regimes across the globe, it should come as no surprise that the overwhelming majority of politicians would refuse to sign on to a law that requires them to ‘Stop Arming Terrorists.’ And, in 2017, that is exactly what happened.

The text of the bill was quite simple and contained no hidden agendas. It merely stated that it prohibits the use of federal agency funds to provide covered assistance to: (1) Al Qaeda, Jabhat Fateh al-Sham, the Islamic State of Iraq and the Levant (ISIL), or any individual or group that is affiliated with, associated with, cooperating with, or adherents to such groups; or (2) the government of any country that the Office of the Director of National Intelligence (ODNI) determines has, within the most recent 12 months, provided covered assistance to such a group or individual.

The only thing the bill did was prohibit the US government from giving money and weapons to people who want to murder Americans and who do murder innocent men, women, and children across the globe. It is quite possibly the simplest and most rational bill ever proposed by Congress. Given its rational and humanitarian nature, one would think that representatives would have been lining up to show their support. However, one would be wrong and in the five months after it was proposed, just 13 members of Congress signed on as co-sponsors.

Not only is the United States refusing to stop arming terrorists, but now they are becoming more violent than the terrorists they claim to fight. At what point do the American people wake up to this insanity?

Sadly, it appears that the American people couldn’t care less about innocent men women and children being slaughtered with their tax dollars on the other side of the planet. They only seem to pay attention to the area when one of these people — whose seen their children blown to a fine red mist by a US drone strike — acts out in a retaliatory way. But instead of understanding that this is blowback caused by US foreign policy, Boobus Americanus thinks these people simply “hate our freedom.”

Terrorism is necessary for the state. War, is the health of the state.

Without the constant fear mongering about an enemy who ‘hates our freedom’, Americans begin questioning things. They challenge the status quo and inevitably desire more freedom. However, when they are told that boogeymen want to kill them, they become immediately complacent and blinded by their fear.

While these boogeymen were once mostly mythical, since 9/11, they have been funded and supported by the US to the point that they now pose a very real threat to innocent people everywhere. As the horrific attacks earlier this year in Sri Lanka  illustrate, terrorists are organizing and spreading.

Terrorists groups have been exposed inside the UK as well for having ties to the British government who allowed them to freely travel and train with ISIS-linked groups because those groups were in opposition to Muammar Gaddafi, who the West wanted to snub out.

It’s a vicious cycle of creating terrorists, killing innocence, and stoking war. And, unless something radical happens, it shows no signs of ever reversing.

The radical change that is necessary to shift this paradigm back to peace is for people to wake up to the reality that no matter which puppet is in the White House, the status quo remains unchanged.

Trump is proving that he can lie to get into power and his supporters ignore it. If you doubt this fact, look at what Trump did by calling out Saudi Arabia for their role in 9/11 and their support for terror worldwide prior to getting elected. He now supports these terrorists and his constituency couldn’t care less.

This madness has to stop. Humanity has to stop being fooled by rhetoric read from teleprompters by puppets doing the bidding of their masters. If Americans aren’t shaken out of this stupor by the idea that the US military and its allies are now killing more innocent people than the Taliban and ISIS — combined — perhaps

Please share this article with your friends and family to show them how their supposed ‘leaders’ — except for a few good ones — are content with funding the enemy, laying waste to rights, and condone the murder of innocence.