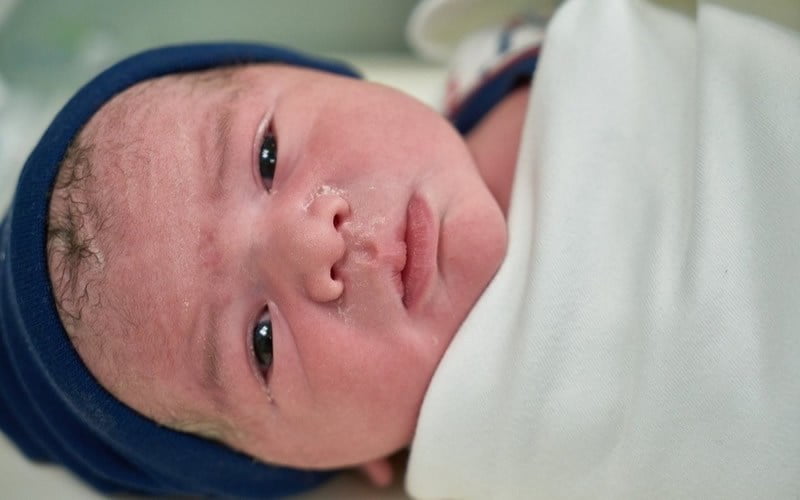 Summary: The mode of delivery at birth is a significant factor in the composition of gut bacteria. Children born via cesarean section have reduced levels of ‘good’ bacteria and an increased number of pathogens linked to the hospital environment.

Babies born by cesarean section have a reduced level of “good” gut bacteria and an increased number of pathogens linked to hospital environments, according to research co-led by UCL that is the most comprehensive study of the baby microbiome to date.

In the study, published in the journal Nature, researchers analyzed gut bacteria in stool samples taken from 596 babies born in British hospitals – 314 babies who had a vaginal birth, and 282 who were born by cesarean. They took samples four, seven and 21 days after birth and later in infancy and also analyzed samples from 175 mothers to determine the origin of the gut bacteria. The samples were gathered as part of the Baby Biome Study, co-led by Dr. Nigel Field (UCL Institute for Global Health).

Researchers concluded that babies born by C-section had a reduced number of “good” Bacteroides derived from their mothers and an increased number of opportunistic pathogens, including Enterococcus, Enterobacter and Klebsiella species.

The study provides evidence that the first colonization of a newborn’s intestine with bacteria varies with different birth methods. Researchers concluded that the type of birth is a significant risk factor in how the gut microbiome from newborns to infancy will be composed.

Immediately after a natural birth, the intestines of infants are quickly colonized with microorganisms of the mothers, but also by microbes from the environment. For several years, researchers have suspected that childhood and later life diseases may be the result of disturbed first colonization of the gut microbiome of newborns.

Researchers cultured more than 800 strains of bacteria and then analyzed their entire genome (genome sequencing). As a result, they detected bacterial virulence factors and clinically relevant antimicrobial resistance in the cesarean section children in some opportunistic pathogens, which could make their carriers susceptible to infections with weakened immune systems.

Researchers concluded that babies born by C-section had a reduced number of “good” Bacteroides derived from their mothers and an increased number of opportunistic pathogens, including Enterococcus, Enterobacter and Klebsiella species. The image is adapted from the UCL news release.

It remains unclear where and how exactly colonization with antimicrobial-resistant opportunistic pathogens occurs in those born by cesarean section and to what extent the hospital environment differs between natural and cesarean births.

The study cannot make any statements about concrete clinical consequences of the changed colonization, but the authors call for prospective and long-term cohort studies that should also include infants from home births.

Senior author Dr. Nigel Field (UCL Institute for Global Health) said: “Our study showed that as the babies grow and take in bacteria when they feed and from everything around them, their gut microbiomes become more similar to each other. After they have been weaned, the microbiome differences between babies born via cesarean and delivered vaginally have mainly evened out. We don’t yet know whether the initial differences we found will have any health implications.”

Funding: The study was a collaboration between researchers at UCL, the Wellcome Sanger Institute and the University of Birmingham.

ABOUT THIS NEUROSCIENCE RESEARCH ARTICLE

Immediately after birth, newborn babies experience rapid colonization by microorganisms from their mothers and the surrounding environment. Diseases in childhood and later in life are potentially mediated by the perturbation of the colonization of the infant gut microbiota. However, the effects of delivery via caesarean section on the earliest stages of the acquisition and development of the gut microbiota, during the neonatal period (≤1 month), remain controversial. Here we report the disrupted transmission of maternal Bacteroides strains, and high-level colonization by opportunistic pathogens associated with the hospital environment (including Enterococcus, Enterobacter and Klebsiella species), in babies delivered by caesarean section. These effects were also seen, to a lesser extent, in vaginally delivered babies whose mothers underwent antibiotic prophylaxis and in babies who were not breastfed during the neonatal period. We applied longitudinal sampling and whole-genome shotgun metagenomic analysis to 1,679 gut microbiota samples (taken at several time points during the neonatal period, and in infancy) from 596 full-term babies born in UK hospitals; for a subset of these babies, we collected additional matched samples from mothers (175 mothers paired with 178 babies). This analysis demonstrates that the mode of delivery is a significant factor that affects the composition of the gut microbiota throughout the neonatal period, and into infancy. Matched large-scale culturing and whole-genome sequencing of over 800 bacterial strains from these babies identified virulence factors and clinically relevant antimicrobial resistance in opportunistic pathogens that may predispose individuals to opportunistic infections. Our findings highlight the critical role of the local environment in establishing the gut microbiota in very early life, and identify colonization with antimicrobial-resistance-containing opportunistic pathogens as a previously underappreciated risk factor in hospital births.