Prepare For Change
Home ARCONTES HCQ-touting doctor says she has been fired after appearing in viral video... 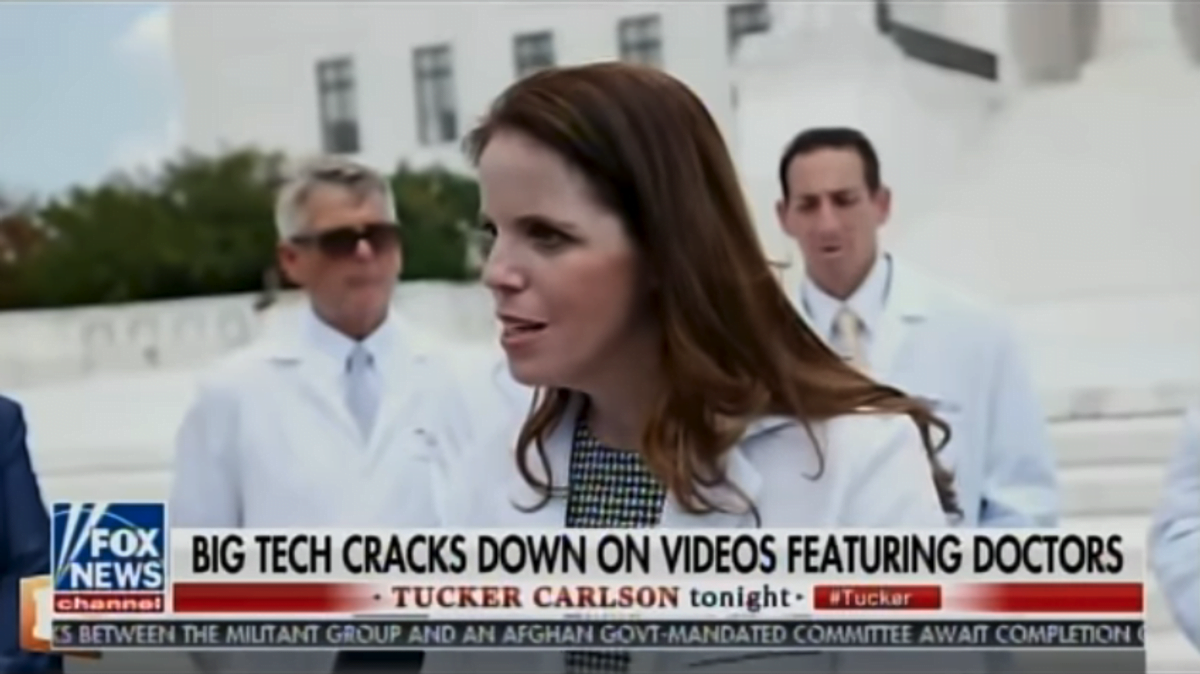 Dr. Simone Gold, the Los Angeles-based physician behind America’s Frontline Doctors, a group advocating for hydroxychloroquine to be used in the fight against COVID-19, says she has been fired for expressing her medical opinion.

Gold shared the news in an interview with Fox News host Tucker Carlson Thursday night, saying she was removed from her job due to her appearance in a viral video touting the efficacy of hydroxychloroquine.

“I’m a board-certified emergency physician for 20 years, and in fact, it seems like until five minutes ago I was considered a hero and people would be clapping and glad that I was doing what I was doing, and then the video came out and I was summarily fired for appearing in what was told to me is an embarrassing video,” Gold told Carlson.

Gold, who graduated from Chicago Medical School in 1989 and completed her residency at Stony Brook University Hospital in New York, appeared in the controversial “White Coat Summit” video earlier this week, organized by her organization and conservative political organization, Tea Party Patriots.

A 40-minute video of a news conference that took place during the summit was posted across social media platforms and quickly garnered millions of views. In the video, one of the doctors, Dr. Stella Immanuel, a Houston pediatrician and religious minister, referred to studies that claim hydroxychloroquine doesn’t work as “fake science.”

The video was shared widely on Facebook and Twitter by many, including President Donald Trump and his son, Donald Trump Jr.

Shortly after the video was posted, however, it was removed by Facebook, Twitter, and YouTube for allegedly making false and dubious claims related to the coronavirus.

Gold said that in addition to the social media giants censoring the video, website host SquareSpace also shut down her organization’s website.

WOW: Our website host @Squarespace has just completely and arbitrarily shut down our website, claiming a violation… https://t.co/kgCrs2t4Fo

Appearing on Glenn Beck’s radio program Thursday, Gold reiterated many of her group’s claims about the hysteria and controversy surrounding hydroxychloroquine, which she called a “complete myth.”

“Hydroxychloroquine is an analogue or a derivative of quinine, which is found in tree bark. It’s the most noncontroversial of medications that there is,” she said.

“It’s been around for centuries and it’s been FDA-approved in the modern version, called hydroxychloroquine, for 65 years,” she continued. “In all of that time, [doctors] used it for breast-feeding women, pregnant women, elderly, children, and immune compromised. The typical use is for years or even decades because we give it mostly to RA, rheumatoid arthritis patients and lupus patients who need to be on it, essentially, all of their life. So, we have extensive experience with it … it’s one of the most commonly used medications throughout the world.”