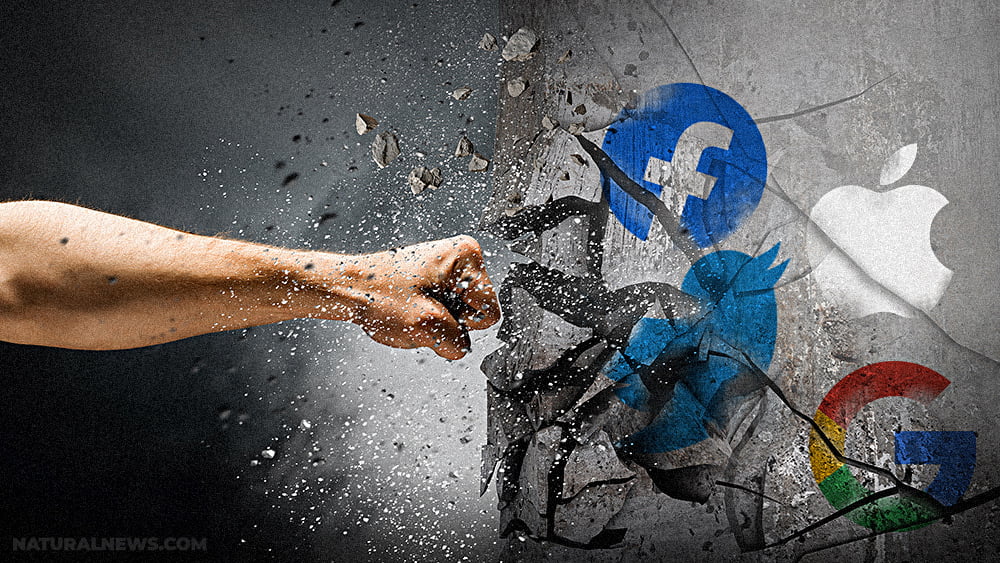 Big Tech, Big Pharma and Big Media are now actively colluding to silence all doctors, websites, videos and online content that explains why hydroxychloroquine can save lives and end the coronavirus pandemic in mere weeks.

Over the last few days, Big Tech and Big Media conspired to censor all videos of “America’s Frontline Doctors” who revealed how hydroxychloroquine is saving thousands of lives in Emergency Rooms across America (and can even be used as a preventive medication).

The video presentation by the doctors has been deleted everywhere across Big Tech platforms in a desperate effort to make sure Americans don’t learn that we don’t have to keep suffering and dying while waiting for a vaccine that might be a failure anyway.

Yet the evil tech giants and media publishers have decided that Americans are not allowed to watch this video of doctors offering lifesaving, proven information that can end this pandemic. Instead, Google, YouTube, Twitter, Facebook and even Vimeo would rather see Americans suffer and die so that a vaccine narrative can be aggressively pushed that enriches Big Pharma.

In other words, Big Tech is now complicit in the mass murder of Americans in order to protect the profit interests of Big Pharma.

This is where we are now in America: A criminal conspiracy of powerful corporations is now blacklisting critical knowledge for human health. They are doing it on purpose. They know people will die because of their actions, and they don’t care.

This. This is where we are in the story right now. Fake and 100% fraudulent anti-HCQ studies are A-OK with Youtube but a bevy of MD’s speaking from their professional experience is not. Lives don’t matter. *sigh* https://t.co/u4v8TMTQhb

Just to confirm what Martenson is tweeting above, YouTube is happy to continue hosting videos promoting a “science” study that has long been retracted and exposed as a complete fraud, but YouTube won’t allow legitimate doctors with firsthand experience to talk about what they see working to save lives in the ER.

All medical and health speech will now be 100% controlled by Google, Facebook and Twitter, all evil corporations that no nothing about health or nutrition

Even in a world where we’re told it’s always a good idea to get a second opinion on anything related to health and medicine, Big Tech has now decided they will dictate what opinions are allowed to be expressed online.

This means that for every disease from this day forward, Big Tech will dictate the “allowable” opinion about treatments for that disease… even though tech giants obviously do not have a monopoly on facts, nor any special competency in the realm of human medicine.

Here’s the video Big Tech doesn’t want you to see. They’ve gone out of their way to remove it everywhere because it dismantled the entire narrative that’s pushing vaccine mandates in America:

Note: Facebook and Twitter have banned the entire platform of Brighteon.com in order to stop people from sharing videos like this. They not only ban individual videos, they ban entire platforms.

And here’s a follow-up video where these doctors speak out against the outrageous censorship that has been unleashed against them by Big Tech and Big Media:

I’ve been warning humanity about the evils of Big Pharma for over a decade, and I was among the first to be 100% censored and blacklisted by Big Tech as I warned what was coming. Now, even doctors across America are waking up to exactly what I was warning about: If you don’t have the correct opinion that Big Tech says is the only allowable truth, you will be censored and de-platformed.
You will also be smeared on Wikipedia and relentlessly attacked by left-wing media.

This means that for every debate, every disease and every event that takes place in our world from this day forward, there is only one allowable point of view that can be expressed, and it’s the point of view that’s chosen by the insane, authoritarian lunatics who run Google, Facebook, YouTube, Twitter, Vimeo, LinkedIn and other radical extremist tech giants.

Today we declare that all employees who work for Big Tech, Big Pharma or Big Media are, in fact, enemy combatants, terrorists and malicious bad faith actors who are engaged in a criminal conspiracy to mass murder millions of human beings.

Every person who works for Google is complicit in mass murder. Every fake news “journalist” who pushes propaganda for CNN is a treasonous criminal working against the interests of humanity. Every person who works for Big Pharma to push unsafe vaccines on billions of people is, in reality, working to destroy human lives and cause suffering and mass death, even if they have to see millions of people killed in the process of raking in their obscene profits.

It’s time we just said it straight out: There is a war being waged against humanity, and that war is being funded by at least 269 corporations such as Google, Netflix, Nike, Apple and Amazon. The goal is to achieve the mass slaughter of billions of human beings, whether through abortions, deadly vaccines, engineered famine or the deliberately provocation of social chaos and civil war.

We now live in a world where the gatekeepers of news and online information are actively, maliciously, deliberately suppressing medical information that could save millions of lives. This makes these corporations enemies against humanity and a clear and present danger to the future of human civilization on our planet.

See my recent interview with Del Bigtree here, as we expose the pure evil and malicious nature of Big Tech and its anti-human agenda:

If humanity is to survive, Big Tech, Big Pharma and Big Media must be defeated and dismantled

If humanity is to survive, these evil corporate giants must be defeated and dismantled. We have now reached the point where the very future of human civilization is at risk of being obliterated by these evil corporate monsters who are conspiring to destroy our economies, our freedoms and our lives.

They don’t plan to end the lockdowns — ever! — because they are rolling out a global depopulation scheme to mass murder 90% of the human beings living today.

Humanity must rise up and defeat that corporate demons, or we will be destroyed by them.

How do we achieve the defeat and dismantling of these evil corporations that now represent an existential threat to humanity? For starters, we must demand that our political leaders take them down for their violations of anti-trust laws and civil rights legislation.

Today, President Trump tweeted that it’s time for him to take decisive action against Big Tech:

If Congress doesn’t bring fairness to Big Tech, which they should have done years ago, I will do it myself with Executive Orders. In Washington, it has been ALL TALK and NO ACTION for years, and the people of our Country are sick and tired of it!

However, executive orders won’t be enough. It’s now clear that because Big Tech is at war with humanity, they will never voluntarily comply with any laws or rules that limit their power to control all online speech.

That’s why Trump needs to unleash the military against Big Tech by first declaring Big Tech to be engaged in an illegal insurrection against the United States of America, then dispatching military police to arrest all the corporate leaders and seize control of these treasonous corporations.

Trump must order to U.S. State Department to seize the domain names of all the tech giants: Google.com, Apple.com, Twitter.com, YouTube.com, Facebook.com, Vimeo.com and others. He must shut them down both online and offline, while the DOJ prosecutes the CEOs for treason.

The continued existence of Google, Facebook and other tech giants is flatly incompatible with free society. These evil corporations have proven they operate with zero respect for human rights, the rule of law or any sense of speech fairness. They operate with malicious contempt for U.S. laws and the United States Constitution. They abuse and exploit their power to rig elections, interfere with the First Amendment and silence their political opponents.

Now, they’re even silencing doctors because they don’t agree with their “second opinion.”

This has gone too far. Big Tech must be stopped.

And if Congress won’t act to dismantle Big Tech, We the People must defend ourselves against their acts of war against us.

The People must occupy and dismantle the tech giants. They must disconnect every fiber optic line that feeds the Big Tech beast, and they must converge on Big Tech office buildings across the country and peacefully dismantle them, server by server, brick by brick, until this unprecedented evil has been banished from our world.

The “demon” of techno-tyranny must be defeated, or none of us will ever be free again.

Many in Congress are finally starting to fight back, but it’s probably too late. Republicans sat around for four years doing nothing, unable to comprehend how the internet works and therefore having no clue what was being engineered against America. As Breitbart.com is now reporting:

But it’s already too late. Google already rigged the 2018 mid-term elections, allowing Democrats to seize the House, so no legislation against Big Tech is currently possible.

That’s why any real solution must come from the President’s declaration of an open insurrection by Big Tech, followed by military action to take down every last corporation that’s actively waging war against America and humanity.

We are far beyond the point of a political solution here. Now, Google and other evil tech giants must be forced to stop their war against humanity.

They will not stop voluntarily. And they will ignore all laws. They are not acting in good faith, and they believe they are already more powerful than any government in the world.

Let’s see how they do against artillery if Trump finally invokes the 3D world layer for this conflict. Send in the tanks. Anything less will be pointless.

And for those of you who say the government should never exercise such power against corporations, ask yourself this question: What about the far more dangerous power over all speech that’s now being exploited by the corporations themselves? Bad ideas (like communism) are more dangerous than bullets, which is why Google and the tech tyrants want total control over all ideas, speech, videos, memes and content. That’s a far greater threat to your liberty than any government action, especially if the entire point of the government’s action is to restore a level playing field for online speech.

The greatest threat to your liberty today is not Big Government, it’s Big Tech and the fake news media.

22 thoughts on “Big Pharma, Big Tech and Big Media are waging an all-out WAR against humanity, and their goal is to mass murder as many human beings as possible before they are stoppe”