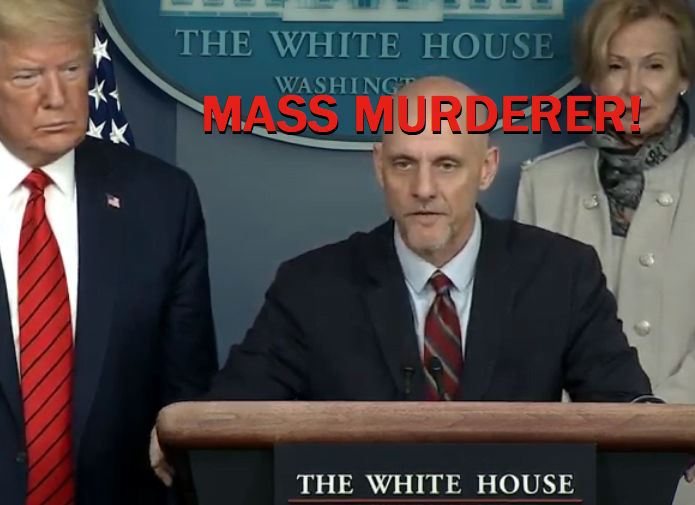 We can add another bureaucrat politician “doctor” to the list of mass murderers running America today: Dr. Stephen Hahn, Trump’s hand-picked man who serves as the Commissioner of the FDA.

The Association of American Physicians and Surgeons has stated that the FDA’s delay to issue a new emergency use approval for outpatient use of hydroxychloroquine (HCQ) for COVID-19 killed at least 20,000 Americans in July.

20,000 more Americans have died while the FDA has delayed since July 1 a new emergency use approval for outpatient use of hydroxychloroquine (HCQ) for COVID-19.

On July, 1 Henry Ford Hospital physicians and researchers in Detroit filed an urgent request to FDA Commissioner Dr. Stephen Hahn for a new outpatient Emergency Use Authorization (EUA) for FDA approval of HCQ to be used in early treatment for COVID-19.  Baylor Scott & White Heart and Vascular Institute in Dallas, issued an urgent appeal supporting the Henry Ford EUA application, based on their clinical study of prophylactic use of HCQ in their own medical workers. Baylor cardiologists emphasized there were no adverse cardiac outcomes in their own or the Ford study.

Henry Ford’s new clinical trial found an impressive 51% reduction in deaths if HCQ was begun within 24 hours of admission to hospital. An outpatient primary care study by Dr. Vladimir Zelenko, using HCQ, azithromycin and zinc given within less than 7 days of COVID-19 symptoms, showed approximately 80% decrease in deaths, and less than 1% of his patients needed to be admitted to hospital. These U.S. early intervention studies extraordinary results show how many lives can be saved with early HCQ treatment.

If the FDA had acted quickly on the Henry Ford and Baylor approval request for HCQ, we can reasonably consider that 16,000 lives could have been saved since July 1.

EUA applications do not have to take long to approve, when well documented rationale and supporting research is presented as Henry Ford team and Baylor cardiologists did.

HCQ is already an FDA-approved drug, unlike remdesivir, which had almost an immediate compassionate use authorization granted that has now been expanded for early use despite severe side effects. The former director of the FDA subagency BARDA, Rick Bright, Ph.D., submitted an EUA for HCQ approval for hospital use at 11:30 pm on March 28, 2020. Dr. Hahn’s approval was granted a little after midnight, March 29, 2020. Approval in about 30 minutes.

We have been waiting almost 30 days for Dr. Hahn to issue approval of the Henry Ford EUA application for outpatient use. Dr. Hahn has stated that we need more data. Henry Ford and Baylor doctors have already provided research documentation stronger than in Rick Bright’s March application, and included current COVID-19 studies from the U.S. and other countries.

What amount of “data” will ever satisfy Dr. Hahn?

Let THIS sink in: Laboratory studies published by the National Institutes of Health 15 years ago (2005) showed potent antiviral effects of chloroquine against SARS-CoV-1 to block the infection at the earliest stage. Anthony Fauci, who was working at NIH at that time, has to have known for the last 15-18 years that chloroquine and hydroxychloroquine are effective against SARS-Co-V-1, which shares 79% of the viral genome with SARS-CoV-2, the cause of COVID-19 disease.

It is appalling that so many more Americans have died, while the physician who is head of the FDA has dawdled on approving HCQ for an urgent new use in this pandemic. Dr. Hahn knows full well the 65-year track record of safety worldwide in patients of all ages, all ethnic groups, and even pregnant women and nursing mothers.

Continued shutdowns of businesses, schools, churches, and mandatory mask edicts are not controlling the epidemic. Meanwhile, these orders have eroded our constitutional freedoms, and devastated our economic, psychological, physical, and spiritual well-being.

Dr. Hahn’s FDA is costing more lives with its delay in removing the obstructions it created to prescribing safe, effective early HCQ treatment: deaths directly from COVID-19 and indirectly by destroying livelihoods and distributions of foods, goods and services required to sustain our lives. (Source.)

Dr. Hahn and the FDA now control the lives and potential future deaths of MILLIONS of Americans, as it will be his decision to issue an Emergency Use Authorization (EUA) for fast-tracked COVID vaccines which we now know are not even needed.

We now know that COVID is very treatable and can be cured 100% of the time.

We don’t even have an accurate test that can 100% identify a Sars-Cov-2 virus!

So just removing the fear from what is advertised as a “killer virus” by assuring patients that they are going to be fine and not die because there are effective treatments, might account for 90% or more of these success stories!

The FEAR of COVID has to be a major cause of illness among those who are reportedly dying and suffering from COVID. Just by removing the fear alone, death rates are probably drastically diminishing.

When the Fontline Doctors gave their press conference in Washington D.C. a couple of weeks ago, the first thing Dr. Simone Gold said was:

We are here to tell the public that there are cures, and you do not have to be afraid anymore.

This was a deliberate statement from a medical doctor who knew full well what she was saying and doing, and the corporate media and Big Tech did everything they could to silence her and her group’s message.

Alternative non-drug solutions to COVID suffering patients have proven very successful, such as Vitamin C therapy which was immediately used in China just after the announced outbreak with great success. Doctors in the U.S. who used this therapy and other natural therapies, particularly in the tyrannical state of Michigan, were arrested and shut down and silenced.

And now even doctors using an FDA approved drug, hydroxychloroquine, are also being attacked and silenced.

HCQ Should be Over-the-Counter

But HCQ originates from a specific kind of tree bark, and should not even be regulated by the FDA, but sold “over-the-counter” like a supplement, as it currently is in many countries.

And while I myself would not take this product or recommend it to people, as there are other natural therapies just as effective if not more effective, the sad fact is that the masses in the U.S. still trust their doctors and the medical system, and therefore this is the best product available to the masses who are too lazy to do their own research and take their own responsibility for their own health.

Should the penalty for their ignorance and blind trust in medicine result in their mass murders?

The story of hydroxychloroquine will probably go down in history as one of the worst scams of all time, resulting in the deaths of millions, if not hundreds of millions of people.

Will the American public ever wake up and start resisting the Satanic overthrow of the United States?