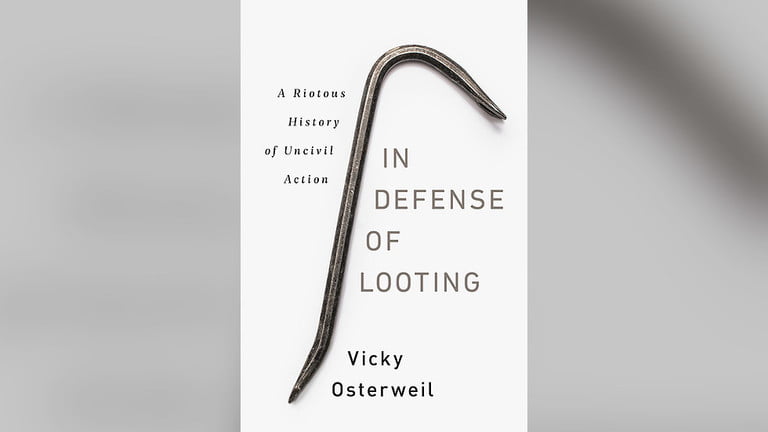 In Defense of Looting is one of the most ridiculous books ever committed to print and would be laughable if the paper-thin philosophy behind it weren’t perniciously making its way into public life.

For most of human history, we have agreed that nicking other people’s stuff is bad. The Bible includes “thou shalt not steal” in the Ten Commandments alongside murder, blasphemy and adultery as things you shouldn’t be getting up to. Sharia law takes such a dim view of larceny that in its strictest interpretation lopping off thieves’ hands is de rigueur.

Buddhism, Hinduism and Sikhism also denounce pinching that which is not yours. It is illegal in some shape or form in every country on Earth. I’d wager even John Lennon, despite his crooning to “imagine no possessions,” would’ve been a bit ticked off if you made off with one of his guitars.

And yet, worse than simple bog-standard thievery, in most people’s eyes, is looting, the crime of stealing things during or after a riot or a disaster of some description. It is such a craven act that must, by definition, be profiteering off a bout of unrest or tragedy, further compounding the suffering of those affected. Any civilised person must surely conclude that looting is abhorrent, immoral and indicative of a societal decay that needs to be urgently addressed when it happens.

But apparently a trans woman named Vicky Osterweil disagrees with civilised society on this. The self-described editor, writer and agitator has written an entire book defending looting, imaginatively titled: In Defense of Looting. Credit where credit’s due, she is certainly nailing her colors to the mast with a title like that, although presumably she would have no issue if a mob decided to remove the aforementioned mast.

So, what does Ms Osterweil mean by looting? Is she redefining the term as so many other terms (racism, gender, oppression, etc) have been by the left? Well, apparently not. In an interview with American University radio she said: “When I use the word looting, I mean the mass expropriation of property, mass shoplifting during a moment of upheaval or riot. That’s the thing I’m defending.”

She does have some caveats to that definition adding: “I’m not defending any situation in which property is stolen by force. It’s not a home invasion either. It’s about a certain kind of action that’s taken during protests and riots.”

Quite how one could define a rioting mob nicking stuff as “not stealing property by force,” I have no idea. To my mind, smashing a car into a shop window and making off with a shed-load of sneakers and handbags seems a pretty forceful act, but we shall press on with her argument regardless. She regards looting, which she explains is a highly racialized term because it apparently derives from a word in Hindi, as a tactic employed in the wider strategy of “rioting.”

Describing what this strategy of rioting achieves, Osterweil explains, “it gets people what they need for free immediately, which means that they are capable of living and reproducing their lives without having to rely on jobs or a wage.” Brilliant, so stealing is good because it helps people get stuff for nothing, then why aren’t we all doing it then? What mugs those of us paying for our Nike shoes or TVs are, when we could just be appropriating them because we “need” them.

Apart from the noble act of getting people stuff they want for free, rioting and looting is apparently also a fantastic way of tackling that bane of our age “white supremacy” because, according to Osterweil, property is intrinsically white supremacist in nature. One imagines that the millions of black people who, you know, own things, will be stunned to discover that by having a car or a house they are contributing to their own oppression, but Osterweil insists that they are.

It is because of this fact that property is steeped in whiteness that looting is a force for good because it “strikes at the heart of property, of whiteness and of the police,” even Korean owned ones, apparently. I’m not sure what she makes of businesses owned by African-Americans, and whether they’re a legitimate target too. And let’s not forget it has the added bonus of being “joyous and liberatory.” That’s right, nicking stuff isn’t just virtuous and anti-racist, it’s also bloody good fun!

Osterweil is pro-looting any business, it doesn’t matter if it is a multinational corporation or a family store that is their sole livelihood. They are all exploiters to this Osterweil because, “small business, family owned business or locally owned business, they are no more likely to provide worker protections. They are no more likely to have to provide good stuff for the community than big businesses.” I mean, they provide jobs, a service and goods to the community, but none of that is “good stuff,” so just pillage everything to smash the patriarchy, or something.

It cannot be overstated how deranged the screed this leftist lunatic has produced is. I cannot believe anyone with an even vaguely functioning brain could think it was worth allowing Osterweil access to crayons and post-it notes, let alone giving her a publishing deal. Especially one with Hachette, the third largest trade and educational book publisher in the world. What on earth were they thinking? This kind of bollocks isn’t just misguided, it is dangerous and evil.

Given that she is clearly an idiot, she probably isn’t aware that this exact same logic could be used to justify Kristallnacht, when Nazi thugs destroyed Jewish businesses and synagogues across Germany in 1938. In a very crowded field, this has to be one of the most ridiculous arguments for anything I have ever come across, I even feel slightly dirty giving in the dignity of a response. Looting is quite simply never justified and cranks like Osterweil attempting to say otherwise deserve to be laughed out of polite society and public life.

Anyway, if you do wish to read this ridiculous tome it is available from those oppressive capitalist pigs at Amazon for $27.57. I would say just nick it as Osterweil presumably wouldn’t mind you doing so, but I’m afraid her publishers, Hachette, have a different view as within the pages of In Defense of Looting, we find this delicious sentence, “the scanning, uploading and distribution of this book without permission is a theft of the author’s intellectual property.” Funny old world, eh?