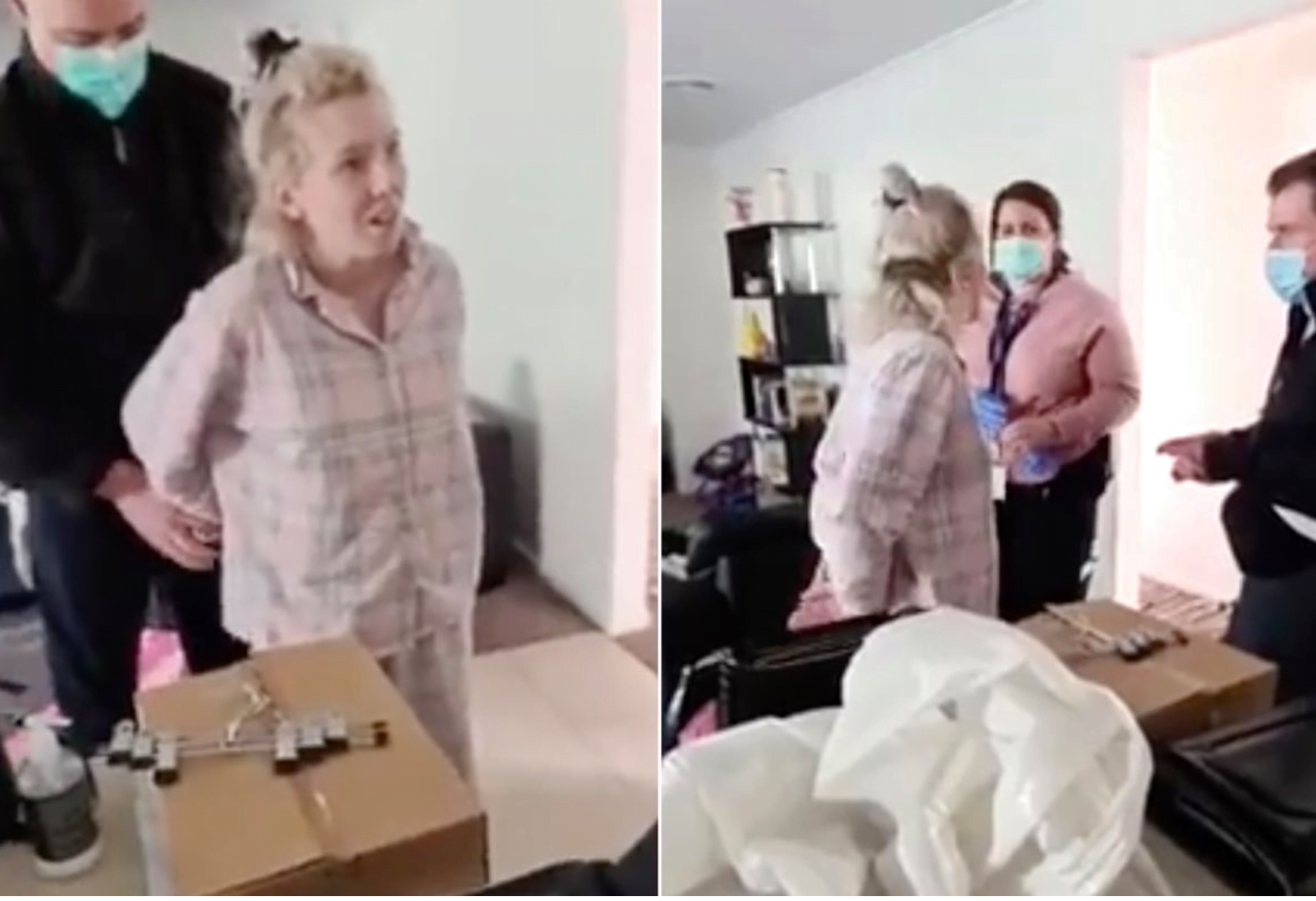 What Happened: Police ‘raided’ and arrested a 28-year old pregnant woman’s home with warrant in hand in front of her partner and two children for posting about her disagreement about COVID-19 lockdown measures in Victoria, Australia on her Facebook page, and creating/planning a peaceful protest in her region this weekend. As the Guardian explains, “Police  arrested the woman, Zoe Buhler, at her home in Miners Rest near Ballarat on Wednesday after she created a “freedom day” event on Facebook calling for people to protest against the Victorian government’s lockdown measures…“As some of you may have seen the government has gone to extreme measures and are using scare tactics through the media to prevent the Melbourne protest,”” the now-deleted event description read…”Here in Ballarat we can be a voice for those in stage four lockdowns. We can be seen and heard and hopefully make a difference!”

Buhler was arrested and charged under section 321G of the state’s Crimes Act 1958, which makes it an offence for a person to “pursue a course of conduct which will involve the commission of an offence”. Based on the fact that she was organizing a protest, with COVID measures being respected, this was enough to arrest her according to the law.

South Australia also recently created a “COVID-19 Emergency Response Act.” It’s noteworthy to mention that in that act, it states that:

Without derogating from section 25, an authorised officer may, for the purpose of ensuring compliance with any direction under that section, remove a child from any premises, place, vehicle or vessel to a place of residence of the child or to a hospital or quarantine facility, as the authorised officer thinks fit (and may, in doing so, use such force as is reasonable necessary.”

Video of the arrest shared on social media, which you can see below, shows the group of officers handcuffing Buhler in front her partner and children. In the video, Buhler becomes increasingly distressed as she tells officers she is pregnant. The footage quickly went viral, with Liberal party politician Craig Kelly declaring, “This is what you’d expect to see in Nazi Germany.” (source)

In a statement, Victoria police said “any gathering of this nature is in blatant breach of the chief health officer’s directions and puts Victorian lives at risk…Victoria police has already taken action as part of an ongoing investigation into the planning and encouragement of protest activity in Ballarat…Those still thinking of attending the protest in Ballarat on Saturday can expect a swift and firm response from police.”

Why This Is Important: We are at a point in time in our history that if you disagree with your government, you can face consequences. It’s not just citizens who are facing backlash for speaking up against multiple governments and their response to COVID-19 lockdown measures, thousands of doctors and scientists, many of them being renowned experts in their field, have been speaking up as well. The latest example comes from Germany, where more than 500 doctors and scientists have formed a coalition to help explain why lockdown measures, masks and more represent authoritarianism and moves that have been put in place that are not based on science and data.

Michael Levitt, a Biophysicist and a professor of structural biology at Stanford University recently criticized the WHO as well as Facebook for censoring different information and informed perspectives regarding the pandemic. You can read more about that here.

A recent report published in the British Medical Journal  has suggested that quarantine measures in the United Kingdom as a result of the new coronavirus may have already killed more UK seniors than the coronavirus has during the peak of the virus.

Reported case fatality rates, like the original official 3.4% rate from the World Health Organization, caused horror, panic and hysteria and were also meaningless. Ronald B. Brown, Ph.D., from the University of Waterloo in Ontario, Canada says, based on his research, that the coronavirus fatality rates we were/are given represents “Worst Miscalculation in Human History.” Not long ago, Brown published a paper in Disaster Medicine and Public Health Preparedness, titled “Public health lessons learned from biases in coronavirus mortality overestimation.”

Below is a statement Brown recently gave to John C. A. Manley, a journalist who was the first to cover the story:

The subject of this article is disruptive, to say the least, although it is not as obvious from the title. The manuscript cites the smoking-gun, documented evidence showing that the public’s overreaction to the coronavirus pandemic was based on the worst miscalculation in the history of humanity, in my opinion. My manuscript underwent an intensive peer-review process. You are the first media guy who has responded to my invitation.

Dr. Sucharit Bhakdi, a specialist in microbiology and one of the most cited research scientists in German history is also part of Corona Extra-Parliamentary Inquiry Committee mentioned above and has also expressed the same thing, multiple times early on in the pandemic all the way up to today.

Implementation of the current draconian measures that are so extremely restrict fundamental rights can only be justified if there is reason to fear that a truly, exceptionally dangerous virus is threatening us. Do any scientifically sound data exist to support this contention for COVID-19? I assert that the answer is simply, no. – Bhakdi. You can read more about him here.

All of these experts in multiple countries are getting no media attention at all, there has been an absolute media black-out, and it’s not hard for mainstream media to make it seem like the majority is the minority, and the minority is the majority. This is how much power they have over human consciousness and the power they exercise in shaping human perception of major global events. We’ve seen it not just with covid, but with the ‘global war on terror’ as well, among many other things.

I’ve said it many times before, today we have a digital authoritarian Orwellian fact-checker going around the internet censoring information that doesn’t fit the narrative put out by governments as instructed by global health authorities, like the World Health Organization (WHO).

Should people not have the right to look at and examine information openly and transparently and determine for themselves what is and what isn’t. Why are social media outlets and governments putting in such a massive effort to censor information, research, and opinions of the world’s leading experts? What’s going on here? Is NSA whistleblower Edward Snowden right? Are governments using covid to take more of our rights and freedoms away under the guise of good-will?

The Takeaway: Major events have a lasting impact on human consciousness, and help people see what they once never saw before. This appears to be happening with the new coronavirus.

A quote from Edward Bernays, known as the father of public relations, is powerful because it sums up these thoughts quite well:

The conscious and intelligent manipulation of the organized habits and opinions of the masses is an important element in democratic society. Those who manipulate this unseen mechanism of society constitute an invisible government which is the true ruling power of our country. We are governed, our minds are molded, our tastes formed, our ideas suggested, largely by men we have never heard of. (Propaganda 1928)

How much longer are we going to listen, obey, conform to measures that are not in our best interests, but under the guise of our best interests? How do governments have so much power to partake in actions that clearly go against the will of many people. How do they have this authority, and why do we continue to vote for a system that in itself is completely corrupt and filled with deception?

Controlling information and what people think is important if you wish to control their lives. This is why ‘Breaking The Illusion’ is one of the first steps in the CE formula to shift consciousness. After all, why do you think people like Julian Assange are in jail, and people like Edward Snowden are living in exile?

How far have we sunk if telling the truth becomes a crime? How far have we sunk if we prosecute people that expose war crimes for exposing war crimes?  How far have we sunk when we no longer prosecute our own war criminals? Because we identify more with them, than we identify with their people that actually expose these crimes. What does that tell about us and about our governments? In a democracy, the power does not belong to the government, but to the people. But the people have to claim it. Secrecy disempowers the people because it prevents them from exercising democratic control, which is precisely why governments want secrecy. Nils Melzer (source)

Something to think about…