Spectators in the front row could have been forgiven for thinking they had wandered into a screening of a horror film rather than a catwalk presentation at China Fashion Week today.

Designer Hu Sheguang’s show was a riot of red with unsettling touches such as a model holding two dolls that looked as if they were covered in blood; horned figures and numerous prosthetic hands adorning the necks of garments.

The Chinese-Dutch fashion designer sent his models down the catwalk in nightmarish creations at the show in Beijing, with liberal splatterings of fake blood.

One model stepped down the catwalk in a full-length red gown accessorised with a fake mask and huge devil horns. Another made for a creepy sight as she walked with a model who looked as she could be her twin.

The sinister pair’s appearance was enhanced as one was wearing a top that looked a lot like a straitjaket, binding her arms to her sides. A fake hand stuck out from each of their shoulders.

Even the models’ hair was red, and was given a shiny appearance, possibly to echo the appearance of flowing blood as the showed off the designer’s Autumn Winter 2016 collection.

A PVC dress with a huge flower on the shoulder made for a dramatic site, and was even more arresting as the model wore a matching mask covering her entire face with two slits for the eyes and one for the mouth.

Masks were a popular element of the collection with another model sporting a full face mask with two huge ears at the side, looking like a large bow.

Although there were slits for the eyes and mouth, the person’s face was completely invisible behind the creation.

Body parts such as hands and heads featured liberally with one model sporting a huge cape-like garment with prosthetic hands emerging from the neckline.

Another had give red heads with no eyes lined up along their shoulders, while a model walked down the catwalk with her face painted red and her eyes closed was almost impossible to distinguish from the mannequin heads around her shoulders

A full skirted ballgown with coils of wire on top made the blood covered model look as if she’d been involved in a particularly nasty accident.

While models are known for strutting down the catwalk with blank sphinx-like expressions to let the clothes do the talking, this particular fashionista got into the spirit of things, with the angry look of a wild animal ready to pounce.

Another paused for effect and stretched out her arms as she showed off her elaborate head gear, which featured a kite with ribbons that streamed to the floor.

The designer moved to the Netherlands aged 16 and runs a fashion store in Amsterdam, and he’s known for designs being at the more extreme end of the spectrum.

His last China Fashion Weeks collection in October 2015 was equally frightful, with both males and females taking to the runway semi-naked, with one sporting a latex bra paired with a ghoulish neck wound.

In November 2014 show models were sent down the catwalk in seven or eight inch heels. At the April presentation at China Fashion Week two years ago, the extreme footwear caused three of the models to take a tumble.

It’s unusual for so many models to fall during the same show, but the platform heels proved too much of a challenge for them.

Ever the professionals, they got up after their fall and continued to walk the catwalk. 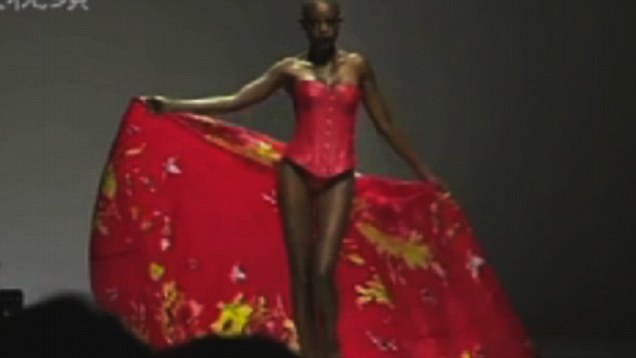