Cumulative US Foreign Assistance to Israel 1949-2020: $295 billion. This doesn’t include additional aid to Israel for intelligence support and other covert funding. Data from Congressional Research Service adjusted for inflation. (Source)

QME is a doctrine that US war planners originally conceived to assess and counter the Warsaw Pact’s numerical troop advantage over US and allied forces stationed in Europe. The US was thought to need a qualitative advantage in military systems in order to counter the imbalance.

Israel began insisting on QME for itself during the tumultuous debate surrounding the Reagan administration’s sale of advance airborne radar systems (AWACs) to Saudi Arabia. Israel argued to protect its QME any such sale required additional and more advanced arms for Israel.

Today, as the US offers additional advanced weapons to regimes successfully coerced to establish ties with Israel [see this], someday those countries could stop obeying US marching orders and respond to popular demands for change, like Egypt during the Arab Spring.That is a problem, according to pro-Israel thinkers.

Bill would give Israel veto over US arms sales 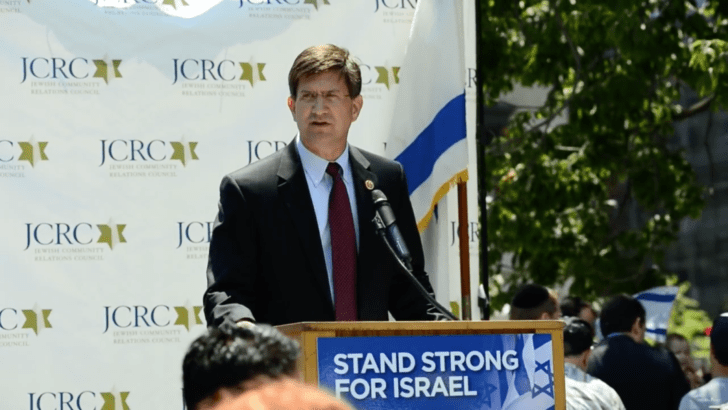 The bill proposes amending the Arms Export Control Act by requiring the president to consult with the Israeli government before proceeding with any such sales. The president would then have to submit a report card to Congress on the degree to which Israel’s “Qualitative Military Edge” might be impacted.

The AECA was already amended in 2008 and 2012 to require certifications that any sales would not “adversely affect” Israel’s military edge. But it is ironic that the Schneider bill employs the Arms Export Control Act and presidential certifications as vehicles for inserting Israeli oversight into the US decision chain.

After Israel’s illegal 1960s diversion of US weapons-grade uranium from the Nuclear Materials and Equipment Corporation (NUMEC) in Pennsylvania, Senators Symington and Glenn passed mid-1970s amendments to the Foreign Assistance Act.

They banned US economic and military assistance, export credits, and US support to countries that deliver or receive, acquire or transfer nuclear enrichment technology when such countries do not comply with International Atomic Energy Agency regulations and inspections.

Since then, Israel has continued to be the Middle East’s leading state sponsor of nuclear proliferation due to its incessant top-to-bottom illicit trafficking in nuclear weapons-related materials, know-how, and technology from the US. Israel proliferated to regimes such as apartheid South Africa.

Symington & Glenn now reside in the Arms Export Control Act and require the president to notify Congress of any proposed US foreign aid to a known rogue nuclear state.

Rather than comply with the law, the last four Presidents instead caved into Israeli and its US lobby’s pressure not to uphold that particular section of the AECA.

Presidents Clinton, Bush, Obama, and Trump instead executed secret letters promising not to do so as reported by Adam Entous in The New Yorker. The National Archives refuses to release two of these letters.

After a successful lawsuit was filed in 2011 to release damning US government information about Israel’s nuclear weapons production facilities, President Barack Obama even passed a 2012 gag order called WNP-136 forbidding any further releases. That has limited any informed debate about Israel, nonproliferation, and related policies such as QME.

Other legislation promoted by AIPAC, such as sections within S.2583, now mandate that the US withhold IAEA funding if the leading state sponsor of Middle East nuclear proliferation is ever “denied its right to participate in the Agency.”

Publicly known cumulative US foreign assistance (excluding intelligence support and other covert funding) to Israel is on track to reach $295 billion in 2020. That is three times the amount spent to rebuild Europe after WWII under the Marshall Plan.

Analytical output from pro-Israel think tanks such as the Foundation for Defense of Democracies (FDD) [info on FDD here] outline even additional solutions beyond the Schneider bill – by showering more “free” US weapons on Israel and more US taxpayer money for Israel to purchase Israeli weapons systems.

The US should also further explode its already ballooning deficit by advancing cash to Israel under a new “Deferred Payment Plan” for Israel to tap future “allocations” from the current $38 billion MOU and even “future MOU’s,” says FDD.

US loss of legitimacy because of Israel

Things were not always this upside down.

A quarter-century ago serious analysis about the so-called “QME” centered on the core issue of deterrence necessarily factored in Israel’s nuclear weapons. The 1994 Begin-Sadat Center for Strategic Studies paper “Israel’s Deterrence Strategy Revisited” performed an analysis of the impact Israel’s undeclared nuclear arsenal had on deterrence.

It even speculated that Israel’s nuclear weapons might drive regional rivals to develop their own nukes or seek long-range missiles with chemical weapons to “balance” Israel’s nuclear arsenal.

The study also admitted that US silence on Israel’s nuclear weapons was “at odds with articulated US positions on nuclear nonproliferation.” This last point is poignant. For a long time, the US has had little legitimacy in global nonproliferation circles largely because of Israel.

It requires Americans to fund billions in freebies to Israel for every US sale of advanced weapons systems to wealthy autocratic regimes in the Middle East. It is preconditioned on undermining nuclear non-proliferation.

Americans would be much better served by the cancellation of all US arms sales to the region including the Israel giveaways, enforcing Symington and Glenn, and restarting long-dormant direct US diplomatic engagement with regional bogeymen such as Iran and Syria. A serious conversation about the Middle East nuclear proliferation – and Israel’s central role – is similarly long overdue.

Grant F. Smith is the director of theInstitute for Research: Middle Eastern Policy in Washington which is co-organizer of 2021 Transcending the Israel Lobby at Home and Abroad conference at the National Press Club and 2020 IsraelLobbyConEXTRA!

Schneider is a life long Israel advocate. He has lived in Israel and prides himself on using his position in Congress to advocate for the Jewish State.

On July 28, 2014 he spoke at the “Stand Strong With Israel Rally” in Washington D.C. during Israel’s July-August attack on Gaza. Israeli forces killed 2200 Palestinians –1,500 of them civilians, including 500 children, 16 health care workers, and 9 journalists. 72 Israelis were killed, and 550 Israelis were injured, 16% of them civilians. 116,000 Gazan homes were damaged or destroyed, leaving over 100,000 people homeless; 216 Gazan schools, 67 Gazan health care facilities were damaged or destroyed. Of the 11,000 Gazans injured, 3,300 were children; 1,000 of them are permanently disabled. More than 1,500 Palestinian children were orphaned.

A total of 30 Israelis have been killed by rockets in the entire time they’ve been launched.