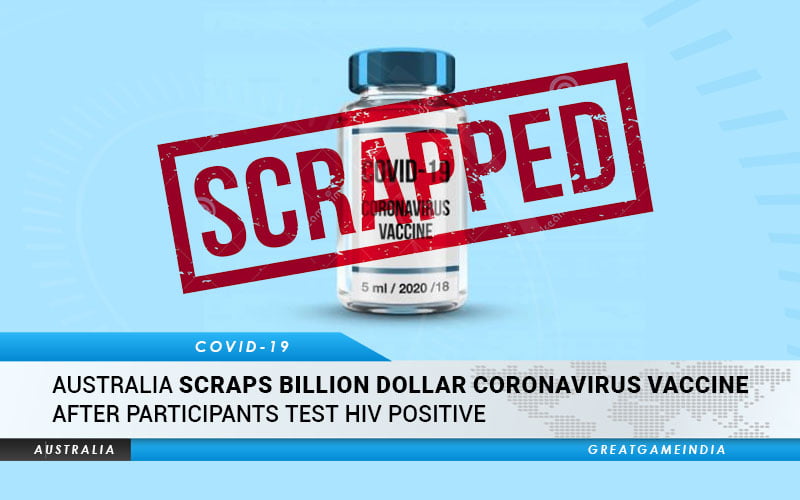 The University of Queensland has abruptly ended its trials for coronavirus vaccine the Australian government had ordered in a $1 billion deal for 51 million doses. The deal was terminated after participants returned false positive HIV test results over fears that vaccine mishap would damage the public’s confidence in the COVID-19 vaccination program.

“University of Queensland vaccine will not be able to proceed based on the scientific advice, and that will no longer feature as part of Australia’s vaccine plan.

Australian vaccine scientist Nikolai Petrovsky had warned the government about the risk of including HIV in a vaccine months before the $1billion deal was signed.

Mr Petrovsky told The Australian the problem with the use of HIV was clear in the ‘hamster and mouse data’ but his advice was ignored. He said  the early data suggested the vaccine itself was quite unstable.

‘Overall it just didn’t look like it was going to be a successful vaccine, that’s why we were surprised when the government committed millions of dollars to it, it just seemed disproportionate.’

The Covid-19 “spike protein” has been the focus of the University of Queensland vaccine, using molecular clamp technology to lock the protein into a shape which allows the immune system to be able to recognise and then neutralise the virus.

Covid’s spike proteins, like most surface viral proteins, are fairly unstable. To ensure that the vaccine induced the right immune response, the clamp chosen comprises two fragments of a protein found in HIV, as those fragments provided the greatest stability to the vaccine.

The vaccine, which used the COVID-19 spike protein and a ‘molecular clamp’, featured an HIV protein fragment. The fragment was producing a partial antibody response in some participants, resulting in false positive tests for the virus. CSL said the false positives were caused by so-called ‘molecular clamp’ antibodies.

After Australian health department secretary Brendan Murphy and acting Chief Medical Officer Paul Kelly reviewed the findings and understood the dangers posed by the vaccine, he recommended ending the deal.

As GreatGameIndia reported earlier, in February a group of Indian scientists discovered that Coronavirus was engineered with AIDS like insertions. The study concluded that it was unlikely for a virus to have acquired such unique insertions naturally in a short duration of time.

Although the study was retracted after it attracted heavy criticism from experts on social media, Luc Montagnier, the Nobel Prize winning French virologist himself confirmed the conclusions of the study.

The study concluded that it is because of these 4 new AIDS like insertions in Coronavirus that the virus jumped to humans originally known only to infect animals.

These proteins are critical for the viruses to identify and latch on to their host cells and for viral assembly. Since surface proteins are responsible for host tropism, changes in these proteins imply a change in host specificity of the virus. According to reports from China, there has been a gain of host specificity in case 2019-nCoV as the virus was originally known to infect animals and not humans but after the mutations, it has gained tropism to humans as well.

The study gives credence to GreatGameIndia‘s earlier reports on how Coronavirus was engineered in a lab and weaponized. It has now been revealed through emails obtained via public records requests that the “natural origin of Coronavirus” was an orchestrated myth.

Emails obtained by U.S. Right to Know show that a statement in The Lancet authored by 27 prominent public health scientists condemning “conspiracy theories suggesting that COVID-19 does not have a natural origin” was organized by employees of EcoHealth Alliance, a non-profit group that has received millions of dollars of U.S. taxpayer funding to genetically manipulate coronaviruses with scientists at the Wuhan Institute of Virology.

The emails show that EcoHealth Alliance President Peter Daszak drafted the Lancet statement, and that he intended it to “not be identifiable as coming from any one organization or person” but rather to be seen as “simply a letter from leading scientists”. Daszak wrote that he wanted “to avoid the appearance of a political statement”.

Meanwhile, China has started using AIDS drugs for Coronavirus treatment. China is using AbbVie Inc’s HIV drugs as an ad-hoc treatment for pneumonia caused by the novel coronavirus while the global search for a cure continues.

The Australian vaccine termination announcement comes only days after it was revealed in a newly released U.S. Food and Drug Administration document that 6 participants died during Pfizer’s COVID vaccine trials.