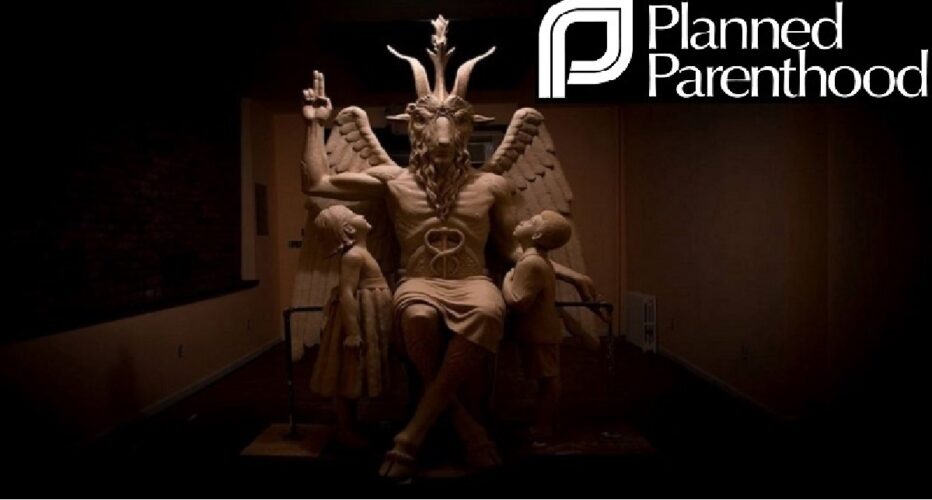 The leaders in charge of the Satanic Temple in Texas are suing the Lone Star State for not allowing them to perform abortions on demand, which they claim is their “religious right.”

Texas’ informed consent laws, these Satanists claim, are a violation of religious freedom because part of worshipping Satan means aborting human babies as a sacrament, similar to how Christians take communion or get baptized.

Murdering unborn children is what Satan demands, and yet Satanists in Texas are prohibited from performing abortions without an abortion facility first providing informed consent to women at least 24 hours prior to the procedure.

“This includes requiring abortion facilities to do an ultrasound and share the unborn baby’s image with the mother as well as provide an informational packet about the abortion, fetal development, abortion risks and resources for parenting and adoption,” Harbingers Daily explains.

The lawsuit was filed on behalf of an anonymous Texas woman who is pregnant, and who claims that Texas’ abortion laws infringe on her religious beliefs.

“I’m particularly interested to see how your a****** Attorney General Ken Paxton replies to this because he likes to march around the nation taking issue with other states’ issues,” said Satanic Temple spokesdemon Lucien Greaves.

“If he’s not trying to sue them for not electing his preferred president, he’s often releasing press releases about the state of religious liberty in other states and what he feels should be done. He likes to use the language of religious liberty, where it seems to me quite obvious [sic] he means religious privilege for a specific viewpoint.”

Back in August, the Satanic Temple of Texas proudly admitted that part of its belief system involves murdering babies as a sacrament to Satan. That same month, it also held a raffle to raise money for this and other planned lawsuits.

The winner of the raffle was given a free abortion as part of a “ritual” that affirmed the “choice” of women who get pregnant to murder their unborn children in the name of “women’s health.”

“The ritual goes like this: Before the abortion takes place, surgically or medically, a member of The Satanic Temple will look at her reflection, be reminded of her personhood and responsibility to herself, take deep breaths, focus on her intent and make herself comfortable,” Greaves added.

“When ready, she will say the third and fifth tenet of the temple aloud.”

The third tenet affirms a key platform of Satanism, “do as thou wilt,” except in the context of women getting an abortion. The fifth honors “science” as the be all, end all source of “truth” in the world, urging Satan worshippers not to “distort scientific facts to fit one’s beliefs.”

The Satanic Temple attempted similar lawsuits in Missouri, all of which failed. In 2019, the Missouri Supreme Court dismissed one such suit after Judge Laura Denvir Stith and four fellow justices explained that Satanic members could have just refused to accept the informed consent pamphlet.

In tandem with Planned Parenthood, the Satanic Temple is heavily involved in promoting abortion across America. Its members are also known to harass pro-life sidewalk counselors who attempt to help women choose life instead of death for their unborn children.

“In 2016, pro-life advocates outside of a Detroit, Michigan Planned Parenthood faced a disturbing scene when a group from the Satanic Temple arrived to counter-protest wearing baby masks and carrying whips,” reports indicate. “They held a similar protest on Good Friday in 2017.”

I will include a short excerpt from the above article:

L.I. – Tell me about the first abortion you ever did as a satanic ritual.

King – The first one I did was about 3 months before turning 15. It took place in a farm house that was surprisingly more sterile than many of the other abortion clinics I had done abortions in. There was an abortion doctor and an abortion nurse.

There was a woman in stirrups about to have a baby who was surrounded by 13 top members of our coven, which were all high priests and priestesses. I was inside the circle with the woman and the abortion doctor.

All the adult members of my coven were there. There were several women kneeling on the floor, swaying back and forth chanting “our body and ourselves” over and over again. Off to the side were several male members of our coven all chanting and praying.

The ritual started at 11:45 at night, and the spell began at midnight, which is the witching hour, and the actual death of the child happened at 3:00 am, which is called the devil’s hour.

My whole role in all of this was to insert the scalpel. I didn’t necessarily have to do the actual killing … what was important was that I get blood on my hands. So, I had to get somebody’s blood on my hands, whether the woman’s or the baby’s, and then the doctor finishes out the procedure.

In that particular one, which was probably one of the more heinous abortions I had ever done, the doctor reached in, ripped the baby out and threw it onto the floor where these women were swaying. The women looked like they were possessed, and when the doctor threw the baby out to them, they cannibalized the baby. — Continue reading here.