Astronomers using the Atacama Large Millimetre/submillimeter Array (ALMA) have detected a circumplanetary disk — a ring-shaped area where moons and other satellites may form — around a protoplanet in the PDS 70 system. 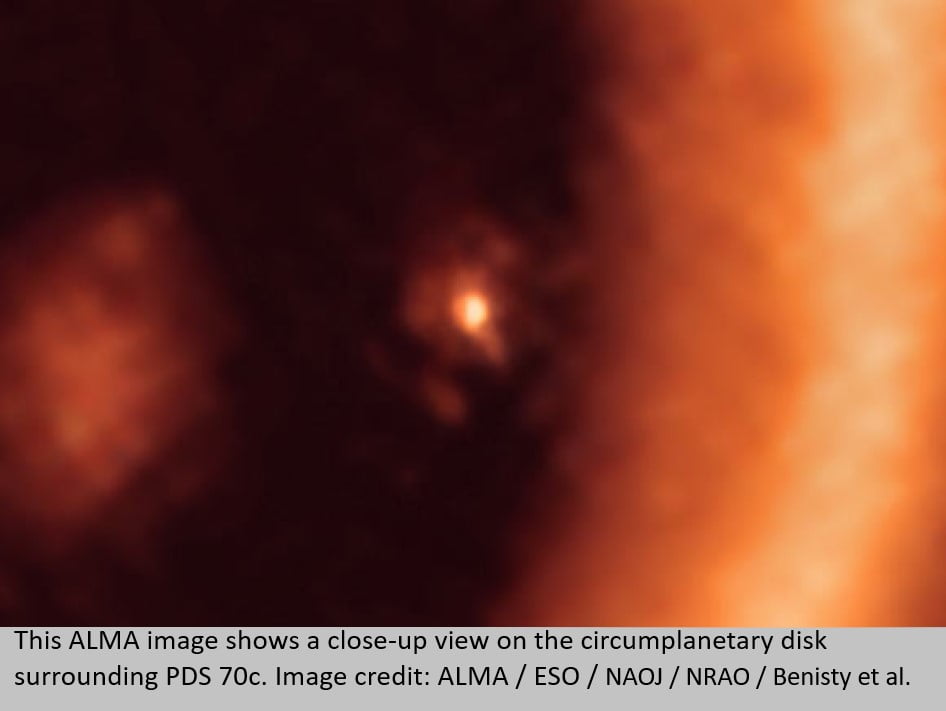 It hosts two protoplanets and a huge circumstellar disk of dust and gas in which a large region from 20 to 40 AU is cleared of dust.

The inner planet, PDS 70b, is located within the disk gap at a distance of about 22 AU from the star, similar to the orbit of Uranus in our Solar System.

The outer planet, PDS 70c, is located near the outer edge of the disk gap at 34 AU from the star, similar to Neptune’s distance from our Sun. 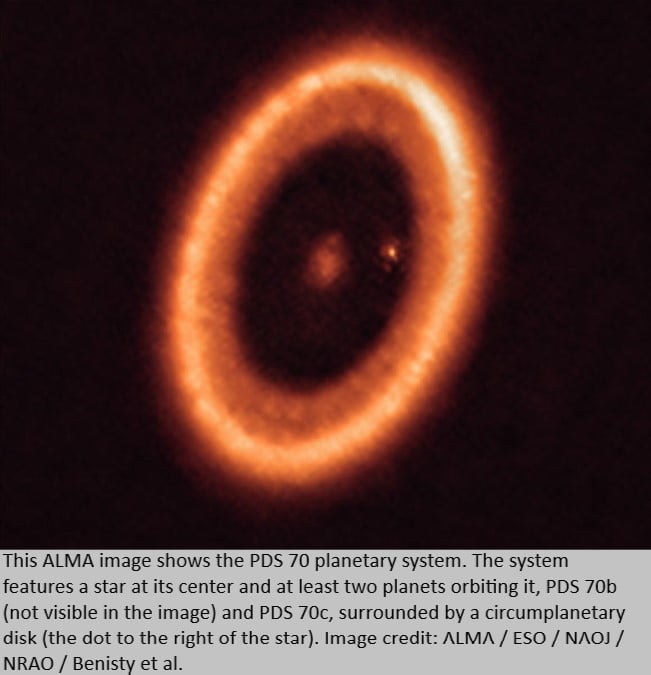 “The new ALMA observations were obtained at such exquisite resolution that we could clearly identify that the disk is associated with PDS 70c and we are able to constrain its size for the first time.”

Dr. Benisty and colleagues also found that PDS 70c’s disk has about the same diameter as the distance from our Sun to the Earth and enough mass to form up to three satellites the size of the Moon.

“These new observations are also extremely important to prove theories of planet formation that could not be tested until now,” said Dr. Jaehan Bae, an astronomer in the Earth and Planets Laboratory at the Carnegie Institution for Science.

Planets form in dusty disks around young stars, carving out cavities as they gobble up material from this circumstellar disk to grow.

In this process, a planet can acquire its own circumplanetary disk, which contributes to the growth of the planet by regulating the amount of material falling onto it.

At the same time, the gas and dust in the circumplanetary disk can come together into progressively larger bodies through multiple collisions, ultimately leading to the birth of moons.

But astronomers do not yet fully understand the details of these processes.

“In short, it is still unclear when, where, and how planets and moons form,” said Dr. Stefano Facchini, an astronomer at ESO.

“More than 4,000 exoplanets have been found until now, but all of them were detected in mature system,” added Dr. Miriam Keppler, an astronomer at the Max Planck Institute for Astronomy.

“PDS 70b and PDS 70c, which form a system reminiscent of the Jupiter-Saturn pair, are the only two exoplanets detected so far that are still in the process of being formed.”

“This system therefore offers us a unique opportunity to observe and study the processes of planet and satellite formation,” Dr. Facchini said.

The findings were published in the Astrophysical Journal Letters.