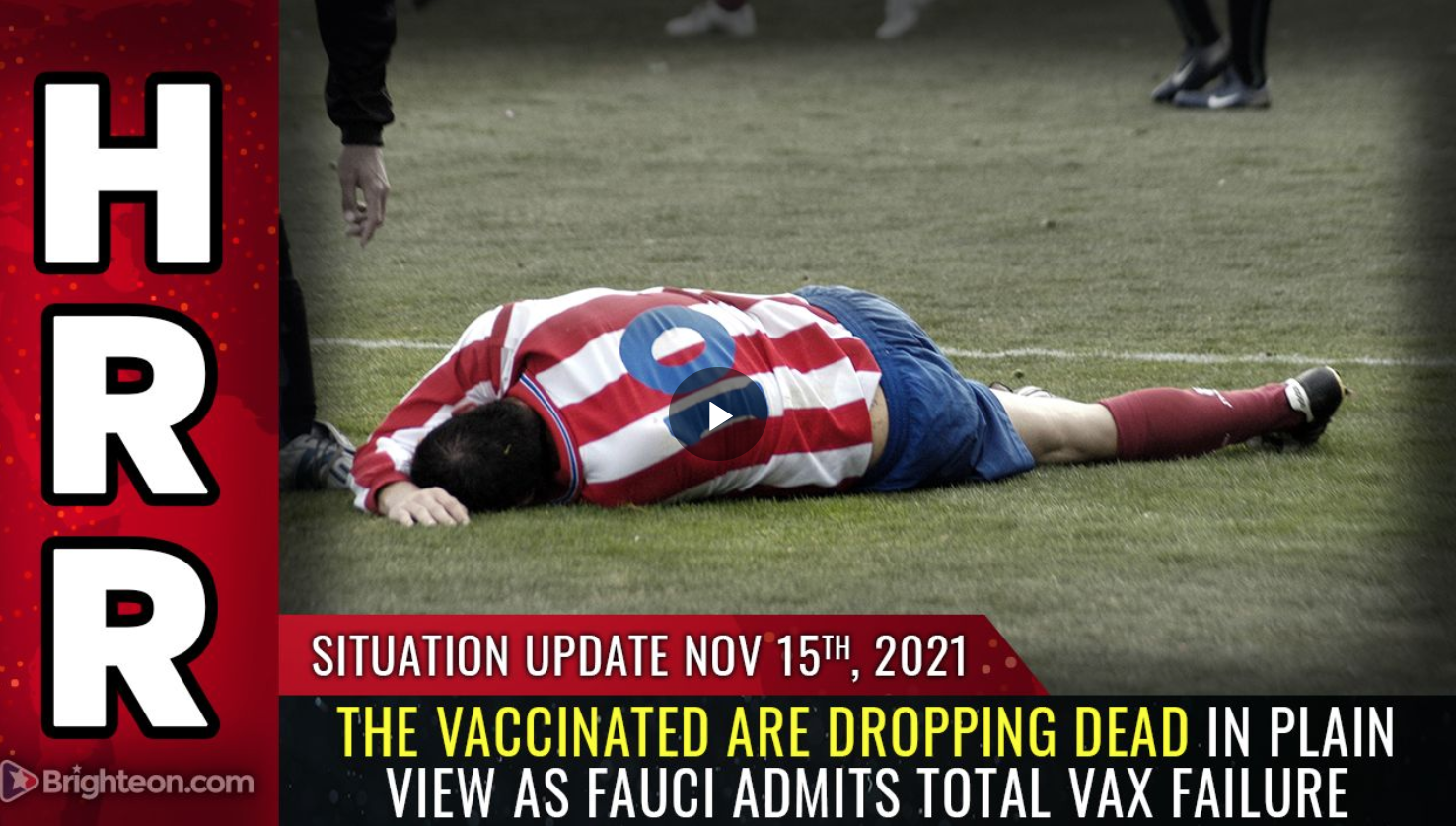 From the Health Ranger Report:

It’s now official: Tony Fauci has admitted that vaccines aren’t working and that vaccinated people of every age are getting sick and dying. His exact quote from a New York Times podcast on Nov. 12th, as reported by Yahoo News:

They are seeing a waning of immunity not only against infection but against hospitalization and to some extent death, which is starting to now involve all age groups. It isn’t just the elderly…

This is after months of claiming vaccines had “95% effectiveness” and that they were so safe and effective, everyone should be jabbed multiple times. Suddenly that false narrative has collapsed, along with a growing list of soccer players and young sports professionals who are literally dying on sports fields across the globe.

So what’s Fauci’s answer to all this? More booster shots, he says. As if a third injection will magically make the vaccine work when the first two injections have already been proven disastrous. For the record, the “booster” shot is just another full dose of the exact same poison that’s loaded into the first two vaccines.

“I think … that the boosting is gonna be an absolutely essential component of our response, not a bonus, not a luxury, but an absolute essential part of the program,” Fauci said during the podcast, doubling down on a failed vaccine that’s killing people.

Of course, anyone gullible enough to go along with a third shot after being told the first two shots no longer work will probably also go along with a fourth shot once they’re told the third shot has stopped working. At this point, no rational person should believe any claims whatsoever about vaccines actually working, and anyone who continues to believe these vaccines are offering them “protection” from a pandemic is obviously cognitively retarded or operating under a mind control spell of some kind.

It’s rather obvious that Fauci wants people to keep taking bioweapons injections until they die. In order to do that, they have to keep tricking people into taking newer spike protein shots by invalidating the ones they previously agreed to take. In France, vaccine passports are now being deactivated for citizens who took the first two shots, all in an effort to coerce them into a third shot (which will soon be a fourth shot). From ReclaimTheNet.org:

French residents over the age of 65 will have their vaccine passports deactivated if they do not take the booster shot when they are eligible… The government said seniors above the age of 65 who do not get their booster shot when they become eligible will have their vaccine passport deactivated and so they will be locked out of much of society.

Got that? If you refuse to take the never-ending parade of deadly spike protein injections, you will be cut off from society. It begs the question: What was the pointing of taking the first two shots in the first place?

Many people took the shots because they just wanted the government to leave them alone. Now, they’re being told that their initial wave of obedience no longer counts. Humans are being trained like dogs to bow down to ever-increasing obedience demands levied by evil government.

Yet that very same government is trying to murder us all, and they’re using vaccines — and food scarcity, food inflation, energy disruptions, etc. — to achieve that end game goal. Covid vaccine “booster” shots are merely compliance steps required for the completion of vaccine suicide.

Those who continue to take booster shots are only accelerating their biological destruction, playing right into the hands of the depopulation globalists who seek to end the viability of the human race on planet Earth.