The Italian white nobility has sent mafia assassins to Rome to avenge the murder of Pope Francis by the Khazarian Satanists, P3 Freemason sources say. The closure of St. Peter’s on Christmas day was the trigger, they say. 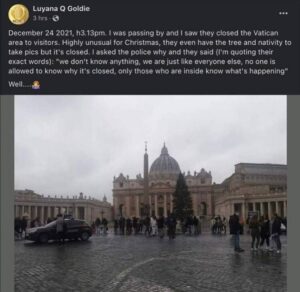 The top Khazarian mafia assassins are also in Rome as a secret war rages there, the sources continue. They also used their propaganda media to disseminate a fake story about masked social distancing worshipers watching the Pope discuss hot-button issues for Israel.

As a counter-attack, Kylie Pentelow, an anchor for the British network ITV, said Pope Francis’ “death was announced.”

The fight over the Pope is only one part of the ongoing war to liberate humanity from the Khazarian mafia. In Israel, the white hats have taken Prime Minister Naftali Bennett into custody “for questioning,” Mossad sources say.

This is why Israeli papers are reporting Bennett was forced to leave a cabinet meeting to enter quarantine despite testing negative for Covid. The excuse is that his fully vaccinated daughter tested positive. Next week we hope to share with readers what the interrogation of Bennett reveals.

The arrest may be related to a recent failed attempt to implode the Turkish economy and take over that countries’ industry. This is the playbook the KM have used to take over industry in countless countries, including Japan. This news item shows the Turks have counter-attacked:

ANKARA, Dec 24 (Reuters) – Turkey has frozen the assets of a total of 770 people and a U.S.-based foundation on the grounds of terrorism financing, a ruling published in its official gazette showed on Friday.

It seems the doomed KM can no longer crash currencies and then loot economies.

At this point, I want to once again make clear that the KM is not Jewish. What we are dealing with is the ancient enemies of the Jews, known as the Hyksos or Babylonians. They worshipped a goat faced god with a forked tail known as Baphomet, Ba’al, Molech, Set, Satan etc. (do a google search of famous people making satanic hand signs to see for yourself) Their leaders, like the Rothschild family, claim to be descended from the ancient Babylonian king Nimrod who rebelled against God.

When this writer was invited to join the Satanists they said the world was full of suffering because the creator was evil and needed to be overthrown. This is not just ancient history. The KH facility of CERN in Switzerland features a statue of the god Shiva dancing a dance to “destroy a weary universe.” That is why the white hats attacked CERN on Christmas eve.

The KM also say they want to kill 90% of humanity. I have it on tape.

So, when so-called Rabbis call me anti-semitic, I say “rabbi shmabbi.” These Satanists have enslaved the Jews for thousands of years. For example, ancient cuneiform texts from Babylon say that circumcision was a form of ritual castration used to mark slaves. The Jews have been their captives at least since the time of Nebuchadnezzar II, which would mean the Jews have been Babylonian slaves for at least 2618 years.

In any case, we are dealing with a very ancient cult of human slavers. They are the ones who call those who are not of their tribe Goyim. “Goyim were born only to serve us. Without that, they have no place in the world – only to serve the People of Israel,” says Rabbi Ovadia Yosef “the beloved head of the Council of Torah Sages.”

This is in complete contradiction to the sign of a true Jew which is to follow the Golden rule; i.e. to treat others as you would want them to treat you.

The Khazarian mafia’s belief that other humans are cattle is not just a metaphor. One of the things about cattle and sheeple is that you are allowed to kill them and eat their meat.

Now that the KM is being defeated and exposed, evidence of widespread, industrial-scale cannibalism is emerging. This BBC headline from 2018 hints at this: “Meat testing: A fifth of samples reveal unspecified animals’ DNA.”

Evidence of cannibalism by the international restaurant chain McDonalds has been sent to us by Israel’s intelligence agency Mossad:

All McDonalds Across the Globe Ordered Closed after FBI Discovered they had been serving human meat. The closures also involved Cemex, Heinz, TerraMar’s Red Ruby Rings, Red Shoes and Keystone Foods, all used for disposing of dead bodies. Find all the McDonalds Restaurants shutdown since Covid. Use New York City, Kuta Bali, Victoria, South Australia as a Starting Point. Find all the Processed Meat Factories across the World that got Rona’d: Meat Pies, Sausage Rolls, Pasties & any other processed meats…

FBI finds remains of many people at McDonald’s meat supplier:

This is what a Mossad source had to say about this:

The Khazarians are the ones behind Mcdonalds. Now go find the TerraMar Project. The Submarine Operation Epstein/Maxwell group. That is where they collect the Jewels off the bottom of the Ocean. All those Children Tortured, Raped, Murdered & Eaten getting ground up & put inside the Jewels. See Those Red Jewel Rings they wear & The Red Shoe Club. That’s right, Childrens’ Remains. See Cemex & Heinz too.

This is what is behind all these headlines the source says:

“McDonald’s to close hundreds of locations in Walmart stores:”

“Times Square’s Glitzy, Four-Story McDonald’s Is Shutting Down After 17 Years”

A dozen McDonald’s across Victoria:

McDonald’s suffers cyberattack in US, South Korea and Taiwan:

“Woolworths, Coles and McDonald’s are exposed to Covid putting thousands of customers on alert:”

“Some Meat Processing Plants Shutdown Due To COVID-19 Cases”:

We contacted the public relations department of McDonalds for a comment but they did not reply to us by the time this report went live.

If this is true, you can see why the KM would want to murder us all with vaccines before the people found out about the true scope and horror of their crimes.

To remove the KM permanently from power, the important thing to remember is we outnumber them by more than 100 to 1. Their control is concentrated at the very tip-top of the visible power structure. Until recently, this was enough because most of us have been conditioned by millennia of slavery to obey orders from above.

So, in order to remove these leaders, we need to start by getting scientific evidence that vaccines are harmful.

The latest figures from the UK Health Security Agency show that the fully vaccinated population of the UK accounted for 4 in every 5 COVID-19 deaths over the past four weeks. This is not data from some conspiracy theorist on the Internet. These are the official figures from the government of the United Kingdom.

The article in the prominent medical magazine Lancet linked below notes for example that 87.9% of recent Covid cases in the UK were among the fully vaccinated while only 3.4% were among the unvaccinated.

This open letter by the British Medical Journal to Facebook also shows how much the corporate media is lying to cover up vaccine crimes.

For those who have the time, Robert F. Kennedy Jrs’ 450-page book, the best-selling non-fiction book on Amazon, provides comprehensive, carefully documented detail of the crimes of the vaccine pushers.

So, when you have so-called leaders like Justin Castro of Canada telling people they need to give up their human rights and be forcefully vaccinated, they are admitting they are criminals.

The corporate media is not reporting it, but a revolution is happening throughout the west. Just take a look at all the mass demonstrations worldwide in the link below.

There is also plenty of evidence agencies and military white hats are taking down the KM matrix.

Last week we reported how CNN was shutting down all of its offices “because of Covid.” Now suddenly, “CNN on Thursday spent an entire segment bashing President Biden after a poll revealed that his economic ratings are ‘worse than Jimmy Carter’s.”

Next “A CNN correspondent noted how Joe Biden appeared “confused” throughout an entire interview as he repeatedly mistook COVID home tests for anti-viral pills.”

There is also evidence the Joe Biden avatar has been taken over by the white hats. Why else would “Biden” agree with the caller who said “Let’s Go Brandon,” the sanitized version of “Fuck Joe Biden.”

Then we have a picture of his wife Jill Biden wearing a GPS monitor boot. 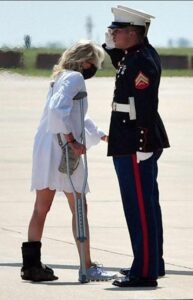 The other sign the KM behind the fake Biden regime is going on is that hundreds of banks are being shut down.

CIA sources say this is related to under-reported news about financial fraud by the Chinese Communist Party over the past two or more years. Chen Yaoming -one of the people in charge of minting China’s cash- was detained recently on suspicion of unspecified “serious crimes.” According to the CIA he forged $428 billion worth of notes to support the KM.

The KM is desperately fighting to stay in power with lockdowns, quarantines, forced vaccines, vaccine passports, etc. Here for example we see a World Bank official talking about how people will not be able to access their bank accounts unless they are vaccinated.

However, as this scene from a UK vaccination center shows, their plan to vaccinate themselves out of trouble is failing.

World leaders have already been charged with various violations of the Nuremberg Code, crimes against humanity, war crimes and crimes of aggression etc. at the International Criminal Court.

If everybody who is aware pushes hard and does what they can personally, a Nuremberg type tribunal of the KM leadership can take place in 2022. No matter what, rest assured the white hats in the military and the agencies will keep fighting until humanity is finally liberated from this ancient Satanic scourge.

If our sources are correct, the removal of the Satanists will end the quarantine of the planet earth and allow human space colonization.