Prepare For Change
Home Awakening The US Federal Reserve Told Us in April 2020: Expect Universal Daily... 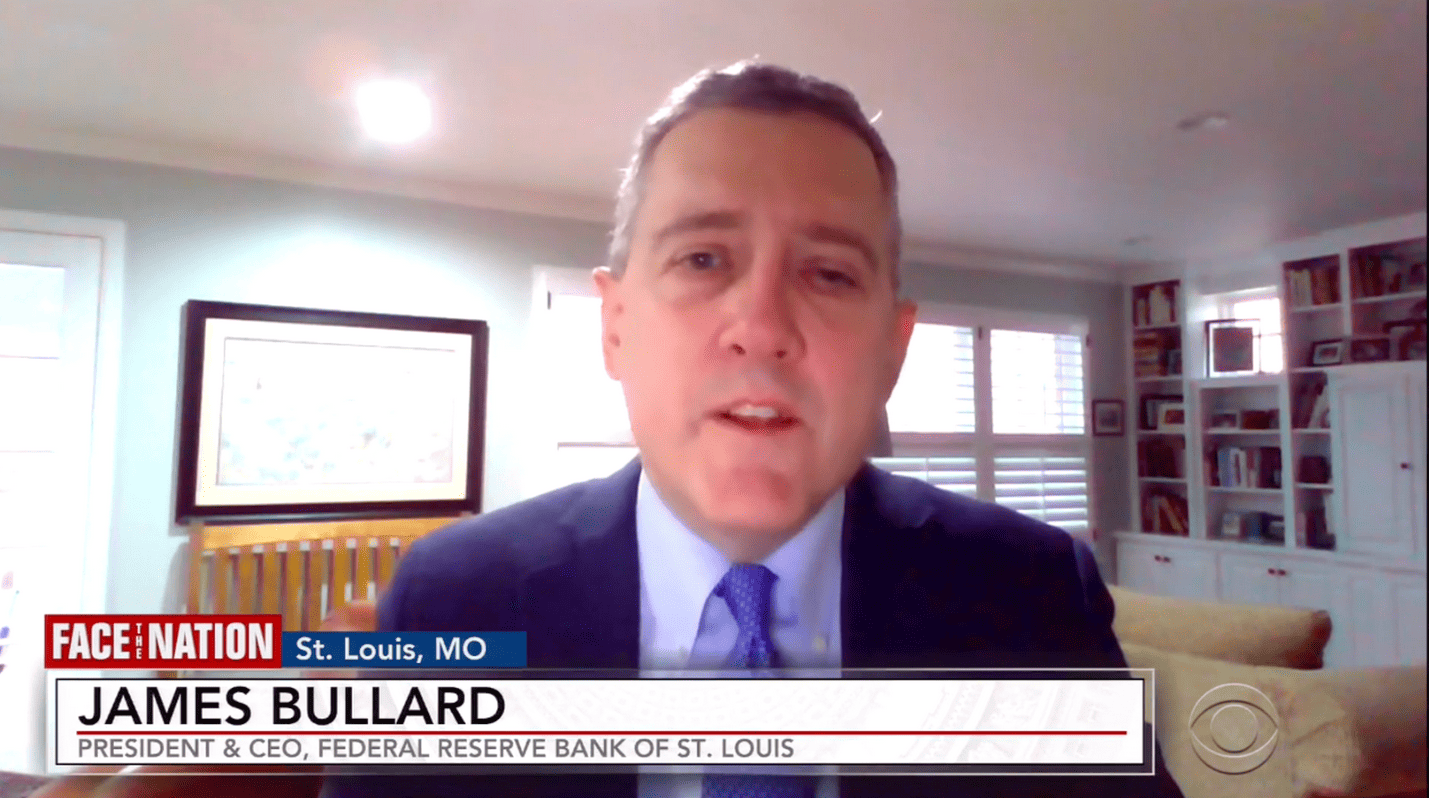 Some of my posts are LONG. Some are short. This will be the latter, but it’s important. As days and weeks and months blur to a grey smear, it is vital we hold onto an understanding of where we were when the lockdowns started compared to where we are now. I remember seeing this interview three weeks after the pandemic was declared. It was a time when tests, such as they are since the virus has not been isolated, were in very, very short supply. While society was marching through its manufactured hysteria, we have James Bullard, CEO of the St. Louis Federal Reserve, telling CBS “Face the Nation” viewers that the economy will be there for them after it’s all over, but we should anticipate a world where universal daily testing is the norm. He doesn’t say “in-home” tests, but that is clearly the plan. Now we have dozens of app / QR enabled home “testing” kits. We know that based on the centrality of the Internet of Bodies to the Fourth Industrial Revolution this will evolve into biosensors data-mining our bodily fluids from swabs, finger pricks, and eventually smart toilets. I encourage you to spend some time going through the website of the Toilet Board Coalition, launched in 2015. You’ll learn a lot about the “sanitation economy” and the United Nations Sustainable Development Goals.

How long before in-mouth devices and predictive models become normalized?

We are living through an economic event, a colonizing event, NOT a public health event. We are crossing a threshold into a human+ era of smartphone wielding cyborgs. There is some money to be made on the test kits and lab work, sure. The government will subsidize costs, especially for economically disadvantaged, because the end game is to bankrupt the state and make way for totalitarian public-private partnership impact investing opportunities. The BIG money is not in the sale of the tests themselves, but rather in prescriptive behavior management and nudges that will be enacted upon our bodies, minds, homes, and cities through autosurveillance.

I have some friends in my network who are going through the new Fauci book. They’ve told me there is great emphasis on “early treatment,” but not a lot of detail about what that means in terms of the universal testing protocols Mr. Bullard and the central bankers have planned. My understanding is this “early treatment” needs to be EARLY, optimally when people are still “asymptomatic.” Thus lobbying for “early treatment” to keep us all safe from viruses that have never (and will never be) isolated dovetails nicely with blockchain biometric ID, in-home testing, health monitoring apps, 5-6-7G, smart homes, Fed accounts, Universal Basic Income, and social impact pathways where we pour our life energies into manifesting their perverse Metaverse as gig laborers shot up with nano-bioelectronics.

The whole enterprise is nicely summed up in two paragraphs below from Jacques Attali’s book Noise: The Political Economy of Music. Attali is a French social theorist who has been preparing the way for global impact markets for decades. Hat tip to Raul Diego of Silicon Icarus for bringing these telling excerpts to my attention.

So keep this in mind for the new year as you sample the smorgasbord of offerings laid out by pandemic content creators and Covid entrepreneurs. The hivemind keeps track, of course, as it learns us and refines its war-game tactics. Will consumers realize many foundational concepts are at odds with one another? Or will they sample indiscriminately, because they like so many of the personalities delivering the information?

If you do not believe in deadly viruses that spread through populations and kill lots of people, the majority of what is circulating among the social media resistance talking heads and those echoing them becomes irrelevant. Noise, noise, noise nudging you towards the universal testing protocol. If you get to that place, you’ll have a lot more time to spend researching the Internet of Bio-Nano Things, of which the images below are phase one. You have to be prepared to leave your identity as a content consumer behind and step into the role of researcher. Don’t be afraid. You can do it. I believe in us. We don’t need leaders; we can walk each other home as equals, as collaborators.