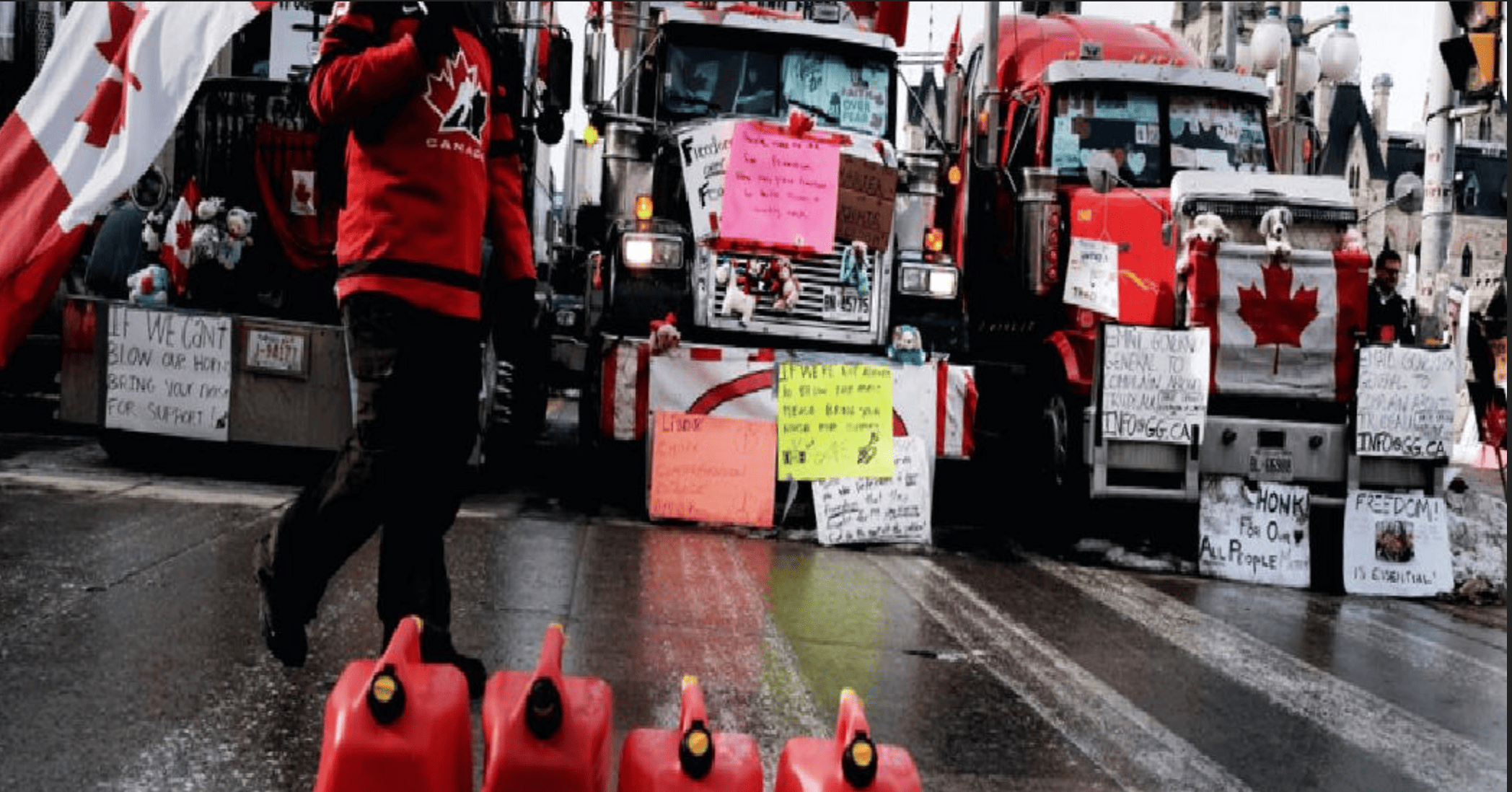 Did you know there’s a massive trucker convoy protesting COVID jab mandates in Ottawa, Canada? You’re forgiven if you missed it, because this gigantic movement received very minimal coverage in the conventional press for the first week or so. Ditto for similar trucker protests forming in other countries, such as Australia and Germany.

The Canadian “Freedom Convoy” started pulling into Ottawa January 29, 2022, gathering in front of the Parliament building. According to The New York Times:1

“The convoy was organized in response to a regulation, implemented this month, that requires truckers returning from the United States to show proof of vaccination. But in recent days, it has broadened to include Canadians critical of pandemic restrictions in general, and of Prime Minister Justin Trudeau …

Private cars and pickup trucks greatly outnumbered the heavy trucks that made up the convoy in its first days. Throughout Saturday, the vehicles clogged the streets in and around Parliament, most of them bearing flags or signs denouncing public health measures related to the pandemic.

Thousands of protesters on foot, many carrying handmade signs on hockey sticks, wandered through the parked vehicles and the slow-moving traffic or gathered on the lawn in front of Parliament … Few people appeared to be following Ontario’s rules requiring social distancing and masks at crowded, outdoor gatherings …

Several Canadian news outlets reported that Mr. Trudeau and his family had been moved out of their official residence by the Royal Canadian Mounted Police as a precaution.”

Canadian Prime Minister Justin Trudeau initially tried to downplay the protest, referring to it as a “small fringe minority” of people “who hold unacceptable views” and don’t represent the views of Canadians. It boggles the mind to think how rapidly our countries have spiraled into authoritarianism where the very idea of freedom is now “unacceptable.”

We can’t be surprised, however. It’s no secret that the World Economic Forum, which is leading the technocratic takeover of the whole world, has penetrated the cabinet of Trudeau and many other countries. WEF head and founder Klaus Schwab admitted it in 2017.2

Once this “fringe minority” descended on Ottawa, however, Trudeau ran. Not only was he escorted out of his official residence, as reported by The New York Times, he’s also said to have tested positive for COVID and will be in isolation for a week.3

Countless videos illustrate just how out of touch Trudeau’s comments are, and that’s putting it kindly. Along highways and overpasses, in the city and outside of it, Canadians have gathered in astounding numbers to cheer the truckers on, everywhere thanking them for taking up this peaceful fight for freedom.

While the actual number of trucks involved is still unknown, it seems reasonable to assume it’s in the thousands. According to Local 12 News,4 the convoy could be a “world-record setter” in terms of its size — an estimated 70 kilometers or some 43.5 miles.

The truckers have vowed to stay put until the Canadian government agrees to roll back all federal mandates, including the vaccine mandate and the vaccine passport.5

In the video above, Jimmy Dore plays an interview with Benjamin Dichter, one of the organizers of the Freedom Convoy, who describes how Canada has already rolled out previously unknown technology that scans and reads a trucker’s passport and vaccine status on approach, without them actually having to show any papers or display their vaccine QR code on their phone.

Their cell phones pop up automatically on the border agent’s screen as they approach the station, and the cell phone is automatically linked to the driver’s passport and vaccine card, which are also displayed automatically.

So much for right to medical privacy! The secret surveillance and tracking we’ve been warning about is here, or at the least at the Canadian border. The question is, where else it might be deployed without our knowledge?

Google Runs Is Part and Parcel of the Surveillance State

For years, I’ve warned people about the creeping surveillance state, of which Google is a significant part. If you still haven’t ditched Google products from your life (which include Android), now’s a good time to start. In early 2020, I interviewed Robert Epstein, Ph.D., who for the last decade has helped expose Google’s manipulative and deceptive practices. As noted by Epstein, Google’s powers pose three very specific threats to society:

Android cell phones, for example, which are a Google-owned operating system, can track you even when you’re not connected to the internet, whether you have geo tracking enabled or not, and even if your phone is turned off.

As soon as you reconnect to the internet, all that information stored in your phone is sent to Google. So, even though you may think you’ve just spent the day incognito, the moment you reconnect, every step you’ve made is shared (provided you had your phone with you).

Google is also tracking your movements online even if you’re not using their products, because most websites use Google Analytics, which tracks everything you do on a website. And, you have no way of knowing whether a website uses Google Analytics or not. The only way to protect yourself against this would be to use a VPN.

For example, Google has been investing in DNA repositories for quite a long time, and are adding DNA information to our profiles. According to Epstein, Google has taken over the national DNA repository, but articles about that — which he has cited in his own writings — have all vanished.

3. They have the power to manipulate public opinion through search rankings and other means — In so doing, they have the ability to shape the opinions, beliefs, thoughts, attitudes, purchases, behavior and votes of billions of people, all without anyone realizing they’re being manipulated. They don’t even leave a paper trail for authorities to trace. As noted by Epstein:

“They’re using new techniques of manipulation that have never existed before in human history and they are for the most part, subliminal … but they don’t produce tiny shifts. They produce enormous shifts in people’s thinking, very rapidly. Some of the techniques I’ve discovered are among the largest behavioral effects ever discovered in the behavioral sciences.”

In his article6 “Seven Simple Steps Toward Online Privacy,” Epstein outlines his recommendations for protecting your privacy while surfing the web, most of which don’t cost anything.

Now, don’t get me wrong, I love Jimmy Dore as we both grew up in a poor neighborhood in Chicago and I love his humor. But for the record, while Dore tells his audience that the COVID jab will protect you from severe illness and death, I disagree. Mounting evidence suggests it might actually destroy your natural immune function, especially after the third dose.

Be that as it may, Dore rightfully states that being against mandates and vaccine passports isn’t a cause restricted to the unvaccinated. He, Dichter and countless others who have received the jab did so because they wanted to protect themselves, but they’re not willing to give up their freedoms and live in a totalitarian state.

The good news is that, for whatever reason, the Canadian Freedom Convoy has captured the attention and hearts of the global population — even with mainstream media ignoring and/or minimizing it for days. As noted by Ron Paul in the Liberty Report above, it’s turning into “a political tsunami.”

Truck driver is one of the most common jobs in North America, and perhaps around the world, which might explain the wide appeal of this movement, and how news of it spread so rapidly and organically despite media blackouts and social media censorship. Another reason is probably because people recognize the leverage truckers as a group have.

For example, nearly 70% of all goods freight transported annually in the U.S. are delivered by truck.7 In Canada, that percentage is closer to 90%.8 When thousands of truck drivers stop delivering goods and instead honk their air horns outside a government building, the effects are bound to rapidly become noticeable in the form of empty shelves.

Anyone tired of living in Orwellian dystopia recognizes that this kind of leverage over the political class is far more significant than people marching in the streets with signs — which is what Europeans have been doing every weekend for months on end, to no avail.

The Rise of Global Freedom Convoys

Inspired and encouraged by the Canadian trucker movement, truckers in other countries are now organizing their own Freedom Convoys.9 In Europe, a European Freedom Convoy will meet up in Brussels, February 14, 2022, and remain there “until vaccination passports and associated restrictions are abolished” across the European Union.10,11 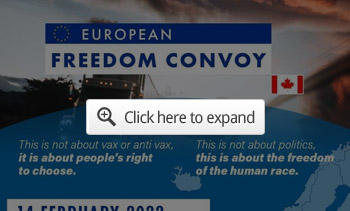 Australia also rapidly started organizing a Freedom Convoy to gather outside the Parliament House in Canberra, starting January 31, 2022.12,13 Within days, the Official Convoy to Canberra Facebook page had gathered 170,400 members.14 Facebook has now removed the group.

The government needs to really take a look at what the American people want. And they don’t want mandates. ~ Jeremy Johnson, DC Freedom Convoy Coordinator

In the U.S., American truckers are planning a DC Freedom Convoy. Facebook was quick in deleting their page, though — a move its organizers blasted as “Censorship at its finest.” As reported by Fox News:15

“The group, titled ‘Convoy to D.C. 2022,’ acted as a place for truckers to plan and coordinate their trek from California to Washington, D.C. Jeremy Johnson, who set up the Facebook group, said his personal account was also removed, prompting him to contact a civil rights attorney to discuss the next steps …

[Mike] Landis, a trucker involved in the freedom convoy, told host Carley Shimkus that this movement is ‘a long time coming.’ He said Americans are tired of the ‘government overreach’ and criticized politicians for, as he believes, not following the Constitution.

‘The presence of that amount of people that show that they are unhappy with what’s going on is a good way to hopefully get their attention,’ he said. Johnson and Brase anticipate a wide range of Americans, not only truckers, will come out to support their cause.

‘This crosses all genders, all races, all sexual orientations, all occupations,’ Brase said. ‘Truckers might be standing up, but it’s not about the truckers. It’s about America.’ The group’s goal is to end vaccine mandates through peaceful protests. ‘The government needs to really take a look at what the American people want,’ Johnson said. ‘And they don’t want mandates.'”