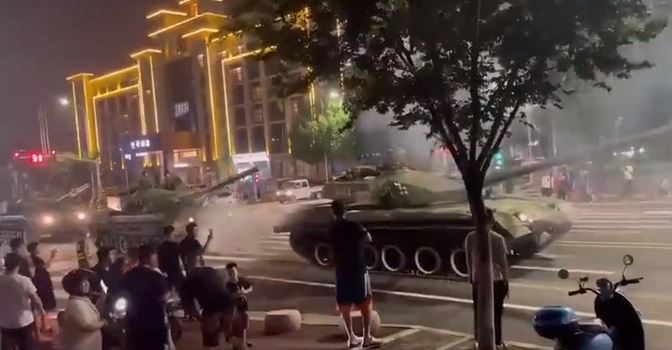 Chinese uprising – coming soon to a bank near you

Tanks are being put on the streets in China to protect the banks. This is because the Henan branch of the Bank of China declaring that people’s savings in their branch are now ‘investment products’ and can’t be withdrawn.

Haircut coming to your neck of the woods soon.

Clif High posted this on his Substack yesterday:

“As the Federal Reserve Note, aka, the ‘dollar’, as the global reserve currency sinks under the waves for this last time, the planetary financial structure unravels the social infrastructure threatening to take all governments down.

“China is entering the ‘active’ phase now. The CCP is feeling the heat. Not only is the populace of China rising up in numbers not seen since Mao’s Long March, but the flow of funds through, and from the World Economic Forum is also drying up just when the CCP is in a very large hiring binge to keep up with popular uprisings.

“So now, tanks on the streets, surrounding the banks for safety from their ‘former’ depositors, and now ‘shareholders (with no rights)’.

“Soon the inevitable will occur, and people who have lost everything, with nothing left, will lose their minds, attacking the tanks with their bare hands. Initially they will be repulsed. That will only last until the first wave is blooded, then the people will simply attack and die, until the tanks, and then the banks, are overwhelmed.

“After that, the local government will fall. Then the regional government will call for help just before it falls. The CCP will panic, sh!t themselves, and many people will perish in the confusion. And so goes the death of the FRN [Federal Reserve Note, aka the US dollar].

“The arrival of tanks to guard banks…signals that we are near to a peak in the crisis in China, thus in turn, forecasting an appearance of the FRN crisis here in the USA, the land of the deluded, and the home of the debt slave (who has been paying for all this sh!t for the last 50 years after Nixon cut us off the gold standard).

Tanks are being put on the streets in China to protect the banks.

This is because the Henan branch of the Bank of China declaring that people's savings in their branch are now 'investment products' and can't be withdrawn.

“This move by the CCP is but the latest in a long trail that included such viewpoints as the Evergrande default. We are reaping the harvest now from this long train of abuses of the global populace by the WEF (and their agents, the CCP).

“It will be mere weeks before there will be dramatic events in other countries to equal, or exceed, tanks around banks in China.”#