Prepare For Change
Home Awakening 90% of pharmacology, psychiatry, vaccine science and PUBLISHED RESEARCH is a complete... 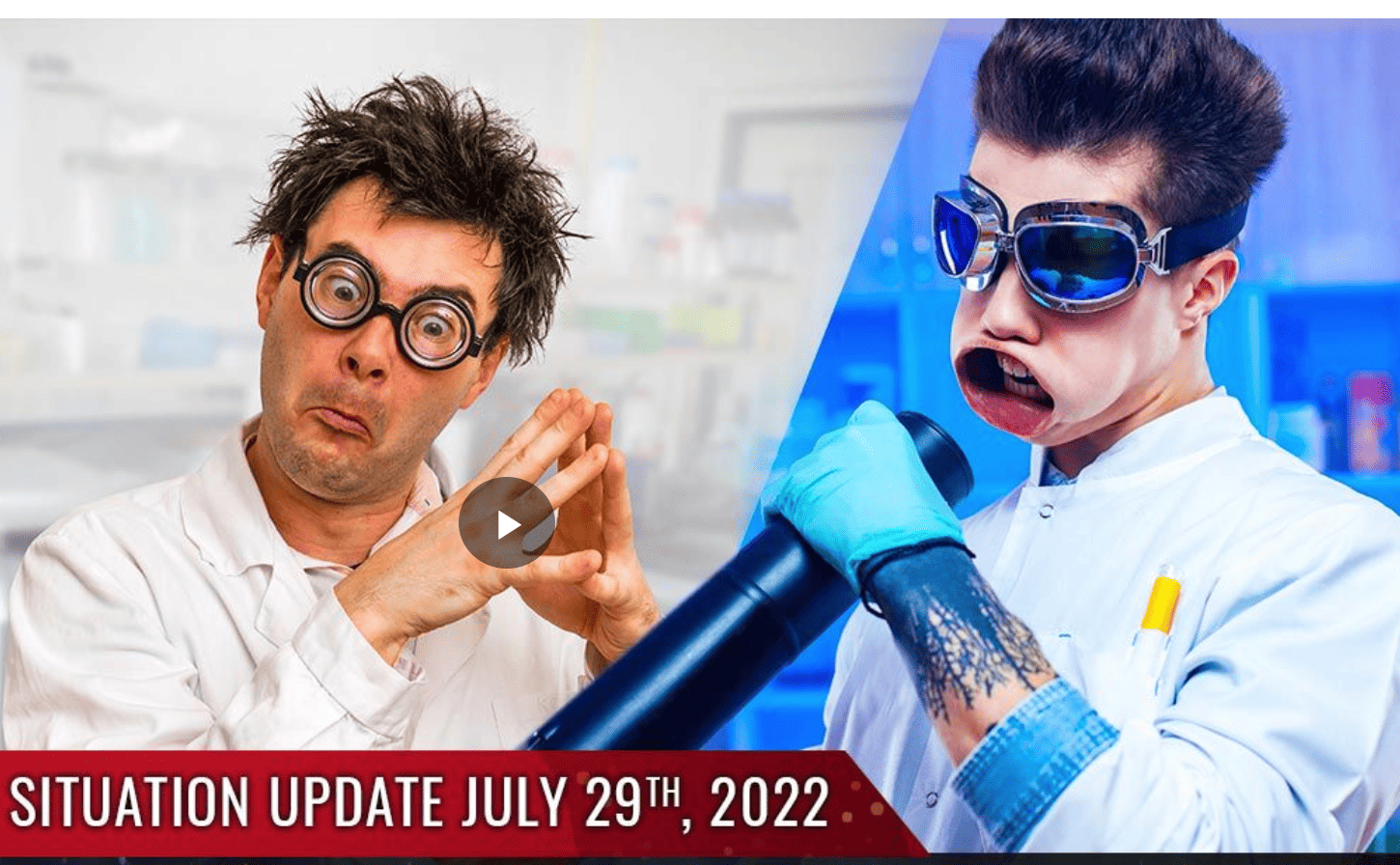 From the health ranger report:

Most published research is a complete fraud, and every field of science is dominated by hucksters, con artists and fakers who fabricate research to collect government grant money while pushing false narratives.

– Decades of Alzheimer’s research is now revealed to be FAKED (see below).
– Antidepressant “serotonin” research was all FAKED (see below).
– NASA is pushing more fake science, claiming to send helicopters to Mars (a planet with virtually no atmosphere) to transport rocks across the Martian plains (see below).
– Economic theories pushing MMT are all FAKED and rooted in complete nonsense.
– Climate “science” is a complete fictional FRAUD rooted in the absurd idea that carbon dioxide is a “pollutant” that kills green plants (it’s actually essential for photosynthesis).
– Vaccine science nothing but FRAUD, pushing dangerous, deadly experimental injections that they don’t even pretend have succeeded in long-term clinical trials showing safety and efficacy.

Decades of Alzheimer’s research is now being called into question as it turns out researchers doctors photos of amyloid proteins to make it appear as if these proteins cause Alzheimer’s.

Why did they fake the photos? To collect on over $28 million in grants from the NIH, of course, which hands out grants to anyone who can prop up the lies of Big Pharma, allowing the pharmaceutical industry to sell more drugs that don’t work.

The more you look into Big Pharma and so-called medical “science,” the more you realize it’s all a massive, coordinated, greed-driven fraud to sell prescription medications to people who don’t need them and won’t be helped by them.

The entire industry of antidepressant drugs has recently been revealed as a massive fraud. It was all rooted in the false claim that depression is caused by “a chemical imbalance” in the brain that could be corrected with SSRI drugs.

But as Amgreatness.com reports, the entire fraud has been blown apart by a new study at University College London that confirms there’s no link whatsoever between low serotonin levels and depression. The pharmaceutical cartels simply made it all up:

University College London last week reported an astounding finding in the study of clinical depression. Researchers concluded “there remains no clear evidence that serotonin levels or serotonin activity are responsible for depression.” The longitudinal study spanning decades “suggests that depression is not likely caused by a chemical imbalance, and calls into question what antidepressants do.”

Essentially, Big Pharma and the complicit pharma-funded corporate media have been committing massive medical fraud for decades, lying to the public and promising that SSRI pills will make you happier. In reality, it only made Big Pharma richer. The entire industry is rooted in fraud and fake science.

Economic “science” is such a joke that covid-vaccine-boosted world leaders get covid, and economic recessions are no longer called recessions

Many of the world leaders who claimed covid vaccines would protect you from covid infections were later infected themselves. This includes fake president Joe Biden, fake minister Justin Trudeau and a whole slew of other fake world leaders who were installed into power using rigged elections:

And now, we’re told by White House Ministry of Truth propagandists that two consecutive quarters of shrinking GDP is no longer a “recession” because a Democrat is in the White House. And the fake information “authority” Wikipedia altered its own definition of “recession” to match the economic lies of the White House, then froze the page and disallowed all edits.

The entire field of MMT — Magical Monetary Theory — is rooted in complete delusion and fakery, claiming that governments can print money to infinity with no inflation and no negative consequences. These are the delusions of mad men who are destroying the world, but they often do so in the name of “science.”

Media panics, claims the whole world is heating up faster than “the rest of the world”

Such a claim is mathematically impossible, yet it has become the default lunatic claim of the climate cult media, regardless of its incomprehensible nature.

The following list was compiled by Americas Frontline News:

Last year, however, it was Israel.

Then again, so was New England.

“Study: New England Is Warming Up Faster Than The Rest Of The World,” reported CBS News.

“Europe is warming faster than the rest of the world and scientists are puzzled,” reported Space.com.

…And Africa, which had been heating up more than the global average for decades.

“The report finds the warming trend over the last three decades in all African subregions was stronger than in the previous 30 years. During this period, it said Africa has warmed faster than the global average temperature over land and ocean combined,” the article said.

The year before that, it was China.

“China Is Heating Up Faster Than The Global Average, Data Shows,” reported Bloomberg in 2020, saying it had been happening for decades.

“China has seen faster temperature increases and rising sea levels than the global average rate over the past few decades, and experienced more frequent extreme weather events, according to official data,” said the article.

But other outlets said it was Australia.

“Australia is Warming Faster than Global Average,” reported Statista in 2020.

A review by America’s Frontline News of Israeli media reports found that the expected heatwaves the media are using to push climate alarmism are actually cooler than last year’s.

“The Health Ministry issued an extreme temperature warning as a heatwave intensified on Wednesday, with its peak expected on Thursday,” reported Times of Israel Wednesday.

Gosh, global warming is so bad that it somehow makes every country hotter than all other countries, even if those countries are themselves hotter than all the rest of the countries. Circular logic. Total fraud. Welcome to the climate cult, where logic is never allowed.

In yet another astonishing piece of blatant science fakery, NASA not only claims to be flying a solar-powered helicopter on Mars — a planet with only 0.6% of the atmosphere of Earth at sea level — they now claim they will send two more helicopters to Mars that will be used to transport heavy rocks across the surface of the planet, reports The Epoch Times.

So now, we’re supposed to believe that heavy lift, solar powered helicopters can fly without an atmosphere? This is just the latest lunacy from NASA, which went to extraordinary lengths to fake Apollo broadcasts, falsely claiming they were half-way to the moon and pretending to broadcast a video of Earth through the Apollo capsule window. See the following interview with Bart Sibrel for video documentary proof, straight out of the NASA film archives.

Visit Sibrel.com for an astonishing collection of videos and other content revealing NASA’s decades-long fakery of Apollo missions, moon landings and more.

The following satire video meme depicts NASA’s fakery on the moon landings, which were “documented” with photos and videos that are so laughable by today’s standards, they wouldn’t even qualify as a good comedy skit:

Here’s another documentary that exposes the fakery of NASA and the moon landing “hoax” in all its glory… the Big Lie revealed:

Climate fakery: 96% of temperature stations are RIGGED to exaggerate temperatures

Climate “science,” of course, is rigged like everything else. There is no global warming crisis, carbon dioxide is not a pollutant, and the so-called “greenhouse gas” effect from CO2 is complete fiction. It’s all made up.

A study that investigated the placement of National Oceanic and Atmospheric Administration (NOAA) temperature stations found that 96 percent of the facilities used to measure heat failed to meet the agency’s own “uncorrupted placement” standards.

Research for the study shows the 96 percent corruption is because the stations’ measurements are tainted by the effects of urbanization – or heat produced because of their close proximity to asphalt, machinery, and other heat-producing, heat-trapping, or heat-accentuating objects.

In other words, the way the corrupt NOAA rigs “global warming” is to place temperature stations near hot roads and overheated urban areas, then scream, “It’s warming!”

The NOAA is a junk science laundering front for the trillion-dollar climate industry, and the entire industry is rooted in fraud and deception. This is becoming increasingly obvious to German citizens, by the way, who are suddenly realizing they will freeze this winter due to a lack of natural gas energy from Russia, since the suicidal leaders of western Europe decided to dismantle most fossil fuel resources and try to survive on solar and wind.

The gamble has been catastrophic. It’s not even cold yet, and several German cities are already turning off lights and hot showers to try to conserve energy use in anticipation of an energy collapse this winter, reports The Guardian:

Cities in Germany are switching off spotlights on public monuments, turning off fountains, and imposing cold showers on municipal swimming pools and sports halls, as the country races to reduce its energy consumption in the face of a looming Russian gas crisis.

What happened to all the green “science” that was supposed to save the world while getting people off fossil fuels? It turned out to be a complete scientific fraud pushed by bad faith politicians, obedient journalists and virtue signaling corporations.

Now, western Europe will face an economic implosion, widespread homelessness, joblessness, starvation and life threatening exposure to cold weather in the months ahead. This is all rooted in western “science,” don’t forget, which claims to have a monopoly on “facts” and wants to rule your life and tell you how much energy you’re allowed to consume.

Don’t forget you’ll also be required to eat crickets, drink recycled urine and diarrhea (already slated to be rolled out in Los Angeles) and “own nothing.”

Almost all the “science” is fakery and fraud

Hear my take on all this and more — including the total junk science fraud of psychiatry — in today’s hard-hitting, uncensored Situation Update podcast: