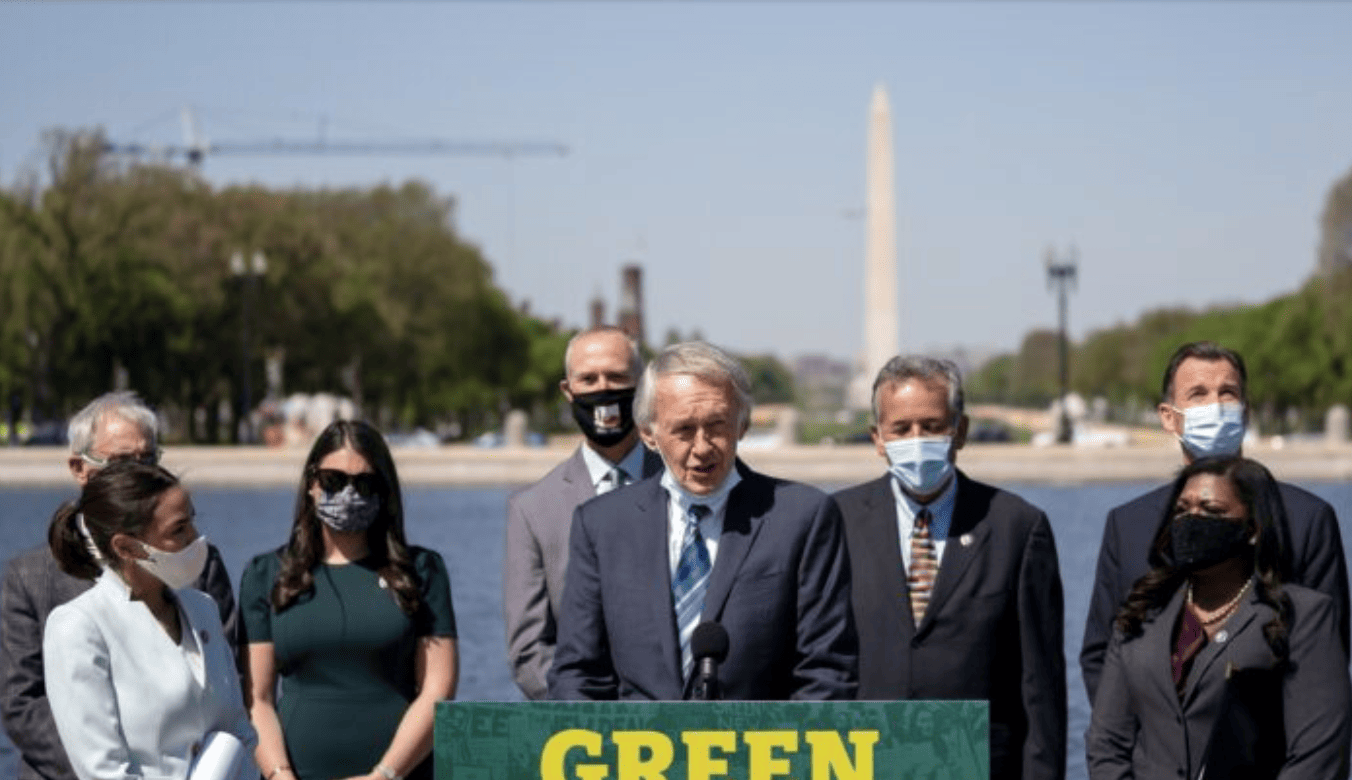 The Green New Deal (GND) has captured headlines in the United States for years, what with luminaries such as Al Gore, Alexandria Ocasio-Cortez (and the rest of The Squad), Hollywood supporters such as John Cusack and Mia Farrow, and virtually the entire Democrat Party publicly supporting its full implementation throughout the land.

Lesser known to most Americans has been the tentacled actions of the Left to corrupt states and municipalities with federal subsidies and through various organizations—many of which are not accountable to voters—that influence local politicians. Examples of these organizations include the National League of Cities, the U.S. Conference of Mayors, ICLEI Local Governments for Sustainability USA, and the various state municipal leagues around the country.

As it turns out, those entities are “all-in” on the Green New Deal. Why? Because those organizations have been captured by the progressive Left within the Democratic Party, just as British historian Robert Conquest predicted in his “second law of politics”: Any organization not explicitly and constitutionally right-wing will sooner or later become left-wing. This is because a key tactic of leftwing political activists is to take control of all public-facing entities from within in order to achieve the Left’s political objectives. Consider the progressive Left’s success in infiltrating and ultimately controlling the public education system, the Boy Scouts of America, and various churches in America.

Perhaps the top political objective of the progressive Left in America is to implement the so-called Green New Deal. And various nongovernmental organizations, associations, and activist groups have been working feverishly for years to influence public opinion and politicians in order to implement green policies all over America.

The Green New Deal is a series of proposals to transform the economy through government action in order to address the so-called climate crisis that has been propagandized by left-wing academics and politicians in Europe and the United States for the last several decades. The name is derived from President Franklin Roosevelt’s “New Deal” in the 1930s, which was a reordering of the U.S. economy by the Democrat-run federal government at the time in response to the Great Depression.

Green New Deal policies were implemented piecemeal during the Obama administration, including significant investments in “green” technologies, such as solar and wind energy projects, with decidedly mixed results. The failed California-based green energy solar panel manufacturer Solyndra became the poster child for green energy boondoggles during the Obama years, having defaulted on a taxpayer-funded loan of $535 million that was approved by the Office of Management and Budget. So much for being one of Barack Obama’s signature green energy projects.

Over time, the various concepts and initiatives backed by Green New Deal advocates were coalesced into comprehensive public policy in February 2019 through House Resolution 109 (introduced by Rep. Ocasio-Cortez, D-N.Y.) and Senate Resolution 59 (sponsored by Sen. Ed Markey, D-Mass.). The goal of the joint resolution was to achieve a federal commitment to a 10-year action plan on climate change aimed at reducing carbon dioxide emissions to “net zero.”

Net zero refers to “a state in which the greenhouse gases going into the atmosphere are balanced by removal out of the atmosphere” (with emphasis on carbon dioxide). Another term for net zero is carbon neutrality. Achieving carbon neutrality requires that carbon dioxide emissions, as a byproduct of industrial processes, must be cut, and/or equivalent amounts of emitted carbon dioxide must be “captured” and removed from the atmosphere in some way. Net zero is to be achieved by rapidly phasing out the use of fossil fuels in power generation, industry, and transportation. If passed into law, the GND would implement government-mandated measures to restrict and reduce carbon dioxide emissions in all U.S. industries, power plants, and homes while monitoring environmental, social, and governance (ESG) compliance. In other words, a progressive bureaucrat’s dream and a free-market entrepreneur’s nightmare.

GND proponents frequently cite updated reports from the United Nations’ Intergovernmental Panel on Climate Change (IPCC) that propagandize “on climate change, its causes, potential impacts and response options,” with emphasis on supposedly adverse effects on climate change by carbon dioxide emissions. An outstanding article posted on Aug. 2 by The Epoch Times skewers the IPCC’s lie that carbon dioxide is a pollutant—and argues that it is instead highly beneficial to life on Earth. Furthermore, a recent report, titled “World Atmospheric CO2, Its 14C Specific Activity, Non-fossil Component, Anthropogenic Fossil Component, and Emissions (1750–2018),” concluded that, despite claims of its adverse effects on climate, “the percentage of the total CO2 due to the use of fossil fuels from 1750 to 2018 increased from 0% in 1750 to 12% in 2018, much too low to be the cause of global warming.”

In short, the Green New Deal is based on a completely false premise!

Much to the chagrin of climate activists and progressive politicians, HR 109/SR 09 has never been passed into law due to insufficient support in the U.S. Congress, probably because there is very little public support for it, as noted by a June 22 Gallup poll, in which the environment/climate didn’t even crack the list of the top dozen priorities of Americans. People seem to have figured out that the “climate crisis” is in fact a hoax aimed at adversely affecting the U.S. economy and their own quality of life.

Not to be deterred, the Democrats incorporated much of the GND into Biden’s Build Back Better legislation, which itself was defeated in 2021. Significant provisions have been subsequently incorporated into the Democrats’ latest spending bill, the “Inflation Reduction Act,” as thoroughly described here.

Stymied by a U.S. Congress that is reflecting “the will of the people,” GND proponents also have been pushing President Biden to use the power of the administrative state to enact GND-related policies via executive order (as other presidents have done) against the people’s wishes. As noted by Ballotpedia here, “the administrative state is a term used to describe the phenomenon of executive branch administrative agencies exercising the power to create, adjudicate, and enforce their own rules.” And to do so without the involvement of elected representatives of the people.

Enter the nongovernmental organizations (NGOs) that have been supporting the administrative state’s implementation of the GND policies for years.

The U.S. Conference of Mayors, National League of Cities, African American Mayors Association, Climate Mayors, C40 Cities, and ICLEI Local Governments for Sustainability USA are excellent examples of NGOs that support the administrative state’s implementation of Green New Deal policies. On Apr. 4, 2021, for example, those entities sent a joint letter to Biden that endorsed “taking a whole-of-government approach to advancing its bold climate agenda.” That letter also thanked Biden for reentering the Paris Climate Agreement and putting the United States back on the road to net zero emissions. So much for these entities being “nonpartisan.”

The August 2022 issue of South Dakota Municipalities, the magazine of the South Dakota Municipal League, featured an article written by Lisa Soronen, director of the State and Local Legal Center for the National League of Cities. Ms. Soronen, a lawyer from Wisconsin, is an activist Democrat who previously worked for National School Boards Association and the Wisconsin Association of School Boards (both of which are Democrat-dominated entities). As noted here, she attended and was quoted at a campaign event for Terry McAuliffe (with Joe Biden present), the Democrat candidate for governor of Virginia, in November 2021.

As her article stated, on behalf of the NLC and together with the U.S. Conference of Mayors (USCM), she filed an amicus brief in the West Virginia vs. EPA lawsuit at the U.S. Supreme Court that supported the Environmental Protection Agency’s Clean Power Plan. The Supreme Court ruled in favor of West Virginia that the EPA’s plan was an overreach that exceeded the agency’s congressional authorization. In short, the NLC and USCM (and probably the South Dakota Municipal League) sided with the administrative state while ignoring the Tenth Amendment and complaining that local governments would subsequently have greater difficulty in “reaching their greenhouse gas targets”—that is, the targets set by unelected bureaucrats who exceeded their authority in setting them! And the partisan Ms. Soronen effectively acted on behalf of GND activists in trying to preserve the ability of the administrative state to act without congressional oversight.

Their “difficulty” is the administrative state’s burden—and the burden of GND activists and progressive politicians who have been end-running Congress in order to implement GND policies across the United States. The citizens retain the power to act through their elected representatives, as safeguarded by the U.S. Supreme Court.

The Green New Deal is all about controlling all aspects of economic activity in the United States—and, indeed, around the world. Rep. Ocasio-Cortez’ chief of staff even admitted that climate change was really just an excuse to “overhaul the entire economy,” as noted here. Its premise is faulty—that carbon dioxide emissions are causing a “climate crisis” that must be reversed by drastic action to completely transform the economy through drastic actions directed by the government.

Progressive Democrats and others who support the GND goal of achieving net zero emissions have been using the administrative state to end-run elected legislatures in order to avoid public accountability for their actions. Nongovernmental organizations such as the National League of Cities, the U.S. Conference of Mayors, and various state municipal leagues have become politically controlled advocates for the administrative state—certainly insofar as the implementation of GND policies is concerned.

The U.S. Supreme Court’s decision in West Virginia vs. the EPA—ruling in favor of West Virginia and against the administrative state—has put a crimp in the plans of the Green New Dealers, provided that citizens put pressure on their elected representatives to actually legislate and not delegate their responsibilities to unelected bureaucracies.