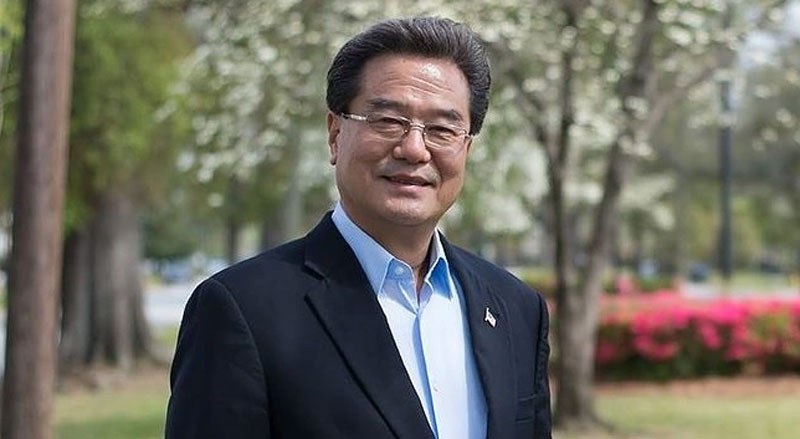 I have never seen anything age this poorly, this quickly. By NYT's @stuartathompson

"Konnech’s founder & chief executive, Eugene Yu, an American citizen who immigrated from China in 1986, went into hiding with his family after receiving threatening messages"

The CEO of a Michigan-based election worker software company has been arrested by California authorities, according to reports.

Yu was charged in connection with an investigation of sensitive election worker data being held on servers in China.

He is currently in custody in Michigan.

DA Gascón announced today that an executive with a #Michigan-based company responsible for the software used in managing #LACounty #election poll workers has been arrested as part of an investigation into the possible theft of personal identifying information of those workers. pic.twitter.com/2VfceR77By

Yu was arrested on suspicion of theft of personal identifying information by investigators from the Los Angeles County District Attorney’s Office Bureau of Investigation.

“I want to thank my prosecutors and investigators for their commitment to eliminating cyber intrusions against government entities and local businesses,” Gascón said.

“Data breaches are an ongoing threat to our digital way of life.

“When we entrust a company to hold our confidential data, they must be willing and able to protect our personal identifying information from theft.

“Otherwise, we are all victims.”

“The investigation is concerned solely with the personal identifying information of election workers.

“In this case, the alleged conduct had no impact on the tabulation of votes and did not alter election results.

“But security in all aspects of any election is essential so that we all have full faith in the integrity of the election process.”

Konnech issued a statement that said:

“We are continuing to ascertain the details of what we believe to be Mr. Yu’s wrongful detention by LA County authorities.

“Any LA County poll worker data that Konnech may have possessed was provided to it by LA County, and therefore could not have been ‘stolen’ as suggested.”

Konnech had been contracted by Los Angeles County and Allen County, Indiana, to work on “election logistics, such as scheduling poll workers.”

Michigan-based Konnech distributes and sells its proprietary PollChief software, which is an election worker management system that was used by the county in the last election.

The software, which assists with poll worker assignments, communications and payroll, requires workers to submit personal identifying information, which is retained by the Konnech, according to the DA’s Office.

Gascón added in a press conference that the data was not related to registered voter information or election material.

The suspect was in a contract with the county for payroll and scheduling of election workers. Investigators learned of stolen data during a separate investigation.

Investigators added there was no impact on elections, calculations of votes, or election results due to the theft.

The LA DA issued a statement that said:

Konnech distributes and sells its proprietary PollChief software, which is an election worker management system that was utilized by the county in the last California election.

The software assists with poll worker assignments, communications, and payroll.

PollChief requires that workers submit personal identifying information, which is retained by the Konnech.

Under its $2.9 million, five-year contract with the county, Konnech was supposed to securely maintain the data and that only United States citizens and permanent residents have access to it.

District Attorney investigators found that in contradiction to the contract, information was stored on servers in the People’s Republic of China.