Prepare For Change
Home News cerntruth – a must read for understanding the lhc, quarks, and strangelets

NB – This website was referenced within a comment on Cobra’s most recent blog post regarding the opening of the Pleiadian Portal. It contains a wealth of interesting information regarding theoretical physics as well as discussing a possible (likely?) purpose for the Large Hadron Collider. After all, it cost about 13B USD to build it. Surely this was only done for the most noble of causes – to increase our understanding of the universe and its properties!

In all seriousness, the phenomena described here would end up destroying the Earth and likely wreak havoc within the inner solar system as well.  The blogger views this outcome as a mathematical certainty given plans on how to use the LHC, and therefore has a strong “Doomsday” bias.  We at PFC do not believe such an outcome will be allowed to happen since it would likely be an extinction-level event. 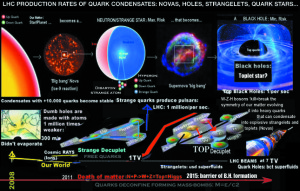 In the graphs, developed in detail in the different posts of this web, we show the 3 distinctive Life extinction events that the Large Hadron Collider can cause, once it is put on line at double potency in 2015, over the 10 Tev barrier of dark matter – the theoretical minimal energy of formation of a ‘bag of strangelets’ and ‘micro-black holes’.

– Creation of baby black holes that do not evaporate, either as top quark condensates (Einstein’s famous frozen stars) or string stars with higher dimensionality.

– Creation of strangelets, lumps of strange quarks shown to be very common in the Universe, as all pulsars seems to be frozen, strange stars.

– Finally the magnetic field of the LHC, the strongest on planet Earth, which cause disturbances on the Earth’s magnetic field, cause of Earthquakes that have increased till record numbers, similar to those of II World War during the carpet bombing of the pacific seismic ‘ring of fire’, since the machine was put on line in a continuous growth that made April 2014, the all time record for this month.

Any of those 3 scenarios should have deterred CERN’s physicists and its political backers, from upgrading the machine to double potency in 2015, but physicists and the P.R.ess considers the issue closed and prefer wishful thinking to ethic and social responsibility.