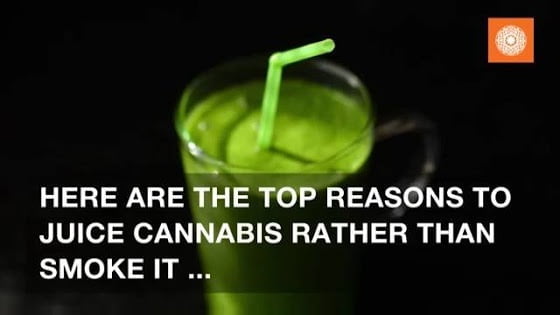 Cannabis is one of the most versatile plants with few others matching its medicinal powers.  Dozens of scientific publications have shown the  cannabinoids from juices and extracts are very effective against diseases  such as cancer, tourette’s syndrome, seizures, migraines, MS, IBS, Alzheimer’s and  many other diseases.  Some believe that raw cannabis should be treated as a dietary staple.

Juicing cannabis usually involves blending or pressing fresh plant material instead of buds that have been dried or aged. And it’s easy.

Here are the top reasons to juice cannabis rather than smoke it.

Juicing better allows the body to interact with cannabinoids through the gut, small intestine and entire digestive system complementing absorption of many critical vitamins, minerals and enzymes within the plant.

2. Juicing Will Not Make You High

“If you heat the plant, you will decarboxylate THC-acid and you will get high, you”ll get your 10 mg. If you don’t heat it, you can go up to five or six hundred milligrams and use it as a Dietary Cannabis…and push it up to the Anti-oxidant and Neuro-protective levels which come into play at hundreds of milligrams”, stated M.D. and dietary raw cannabis specialist Dr. William Courtney.

Cannabis juice can be mixed with other healthy ingredients in your juices or smoothies to create high energy, high anti-oxidant beverages to keep you alert and active the entire day. Think of how much easier it is to drink cannabis in liquid form that smoking or vaporizing which is not only inconvenient in our society, but has a stigma attached to it. By blending or juicing cannabis, it becomes as versatile as any other leafy green.

4. Allows You To Avoid Smoking

While  a  large-scale national study  suggests that moderate use of marijuana is less harmful to users’ lungs than exposure to tobacco, marijuana smoke  irritates the airways and can lead to respiratory symptoms and even bronchitis. Vaporizing is one way to avoid the problems associated with smoking, but the benefits of juicing exceed either form.

5. Getting The Highest Dose Possible of Cannabinoids

This is possibly the most important reason of juicing rather than smoking cannabis. Cannabis plants actually produce cannabinoids in their acidic forms only, which are then converted to THC and CBD after being heated or aged. Decarboxylation is the chemical reaction responsible for this conversion. THCA and CBDA are  believed to act  as anti-oxidants, anti-inflammatories and neuroprotectants, much like their non-acidic counterparts. When left in their natural forms, THCA and CBDA won’t get you high. However, they happen to offer many of the same health benefits as their better known counterparts. Without the high, these acidic compounds can be ingested in large doses without having an impact on your daily activities.

“THCA is the real tricky molecule… Once it’s heated, it turns into THC and the tolerable dose drops from hundreds of milligrams a day to 10 milligrams”, says Dr. William Courtney.

Figure Our What Works Best For You

The fact that THCA won’t get you high implies one major drawback for medical users –  it doesn’t activate the  endocannabinoid system. A  large portion of medical marijuana research has focused on the activity of this unique biological system, which most –  including Dr. Courtney –  believe is responsible for the symptom relief that cannabis is known for.  For example, symptoms of pain and neurological dysfunction are thought to be directly regulated by cannabinoid activity in the brain.  Treatment with raw cannabis may not be as effective in these cases, although no one really knows for sure.  Until more studies are done on the effects of raw cannabis, patients must shoulder the responsibility of figuring out what works best for them.

Please note:  Wake Up World does not advocate breaking the law, we advocate  changing the law.