Prepare For Change
Home Disclosure Professors & Politicians Gather To Warn Us About The New World Order...

“We are dealing with a criminal undertaking at a global level … and there is an ongoing war, it is led by the United States, it may be carried out by a number of proxy countries, which are obeying orders from Washington … The global war on terrorism is a US undertaking, which is fake, it’s based on fake premises. It tells us that somehow America and the Western world are going after a fictitious enemy, the Islamic state, when in fact the Islamic state is fully supported and financed by the Western military alliance and America’s allies in the Persian Gulf. … They say Muslims are terrorists, but it just so happens that terrorists are Made in America. They’re not the product of Muslim society, and that should be abundantly clear to everyone on this floor. … The global war on terrorism is a fabrication, a big lie and a crime against humanity.” (source) (source)

The quote above comes from prominent author and Canadian economist Dr. Michel Choissudovsky, who is the University of Ottawa’s Emeritus Professor of Economics, spoken at the International Conference on the New World Order, which was organized and sponsored by the Perdana Global Peace Foundation. You can find a full video of that conference at the end of this article.

“What is at stake is more than one small country; it is a big idea, a new world order, where diverse nations are drawn together in common cause to achieve the universal aspirations of mankind: peace, and security, freedom, and the rule of law.” – George Bush Sr. (source)

“I think his (Obama’s) task will be to develop an overall strategy for America in this period, when really a New World Order can be created.” – Henry Kissinger, CNBC

The conference featured numerous speakers, such as Dr. Thomas PM Barnett, an American military geostrategist and Chief Analyst at Wikistrat. He has also held numerous insider positions, one of them being adviser to former Secretary of Defence, Donald Rumsfeld. President of the International Movement for A Just World, Dr. Chandra Muzaffar, and Former Editor of the Japan Times, Yoichi Shimatsu, were also in attendance, and the event was headed by Dr. Mahathir Mohamad, who was the fourth Prime Minister of Malaysia (for 22 years) and is currently the President of Perdana Global Peace Foundation.

It’s great to see a number of academics and professionals come together to create awareness about what seems to be a global military agenda towards a massive surveillance state and a new world order — more specifically, a one world government.

Prior to ‘credible’ people coming forward in an attempt to create awareness about the New World Order agenda, it was considered a conspiracy by most. It’s quite disturbing that a conference like this does not receive any mainstream media attention, and it’s even more disturbing that it would need to be aired on mainstream television in order to be taken seriously by the masses. The grip that corporate media has on the minds of the masses is strong, and it does a great job at keeping the world ignorant and oblivious to events and concerns being raised by many experts, in various fields, from all over the world.

The New World order is the supposed goal of a handful of global elitists who are pushing for a one world government and a heightened national security state. In order to accomplish this goal, this group uses false flag terrorism and the fear of global threats to impose increased security measures on domestic populations (like Bill C-51) to justify the invasion of other countries (like Iraq and 9/11, for example).

False flag terrorism is run by covert operations designed to deceive and manipulate in such a way as to appear as though they had been carried out by groups, nations, or entities other than those who actually planned and executed them.

“All three buildings were destroyed by carefully planned, orchestrated and executed controlled demolition.” – Professor Lynn Margulis, Department of Geosciences, University of Massachusetts at Amherst and National Academy of Science member, one of many academics who has been very outspoken regarding 9/11 (source) (source)

“The truth is, there is no Islamic army or terrorist group called Al-Qaeda, and any informed intelligence officer knows this. But, there is a propaganda campaign to make the public believe in the presence of an intensified entity representing the ‘devil’ only in order to drive TV watchers to accept a unified international leadership for a war against terrorism. The country behind this propaganda is the United States.” – Former British Foreign Secretary, Robin Cook

This ‘group’ has been using foreign threats to heighten security, take away our rights, and invade other countries. Virtually the  entire world is now covered with United States military bases, with the exception of Russia and a few other countries. And we’ve been warned about this before; Eisenhower warned us to guard against the rise of misplaced power and the acquisition of unwarranted influence by the military industrial complex. President Kennedy warned us about a group that thrives off of the potential of an increased need for security, and how it would be seized upon by those “anxious to expand its meaning to the very limits of official censorship and concealment.”

“Al Qaeda and the Al Qaeda affiliated organizations, including the Islamic State, are not independent organizations, they are sponsored, and they are sponsored by the United States and its allies. It is documented that prior to 2011, there was a process of recruitment of mujahideen to fight in Syria, and this was coordinated by NATO and the Turkish high command. This report is confirmed by Israeli news sources and unequivocally, we are dealing with a state-sponsorship of terrorism, the recruitment of mercenaries, the training and the financing of terrorism.” – Dr. Michel Choissudovsky (source)

Are we seeing the same thing with ISIS? It seems the path towards a New World Order isn’t really possible without a constant threat of war and terrorism.

Who is this group? Well, Dr. Choissudovsky believes it originates with those who control the US, Israel, and other allies, but who is controlling these countries and this massive global agenda?

“A power has risen up in the government greater than the people themselves, consisting of many, and various, and powerful interests, combined into one mass, and held together by the cohesive power of the vast surplus in the banks.” – John C. Calhoun, 7th Vice President of the United States, from 1825-1832. He was also a political theorist during the first half of the 19th century. (source)

You can view more statements like the one above from various presidents and politicians HERE.

The New World order also deals with legislation that we never really hear about. For example, Dr. Mohamad (Malaysian Prime Minister) made the accusation that the Trans Pacific Partnership (TPP) was strategically aimed at dominating the world economy, and marks another step closer to the global dominance of those who orchestrated it.

Think about it for a moment, if there is a group of people using various governments to force their will upon the world, heighten the national security state by means of manufactured false flag threats and more, what are we dealing with here? If the same people who are portrayed as patriotic — men and women defending their land and fighting for their country — are actually pursuing terrorists that were created and funded by their own government, what is really going on here? And why do so many politicians, academicians, and professionals spend their time trying to notify the world, without a peep from mainstream media?

We would love to hear your thoughts, so please feel free to share in the comments section below. 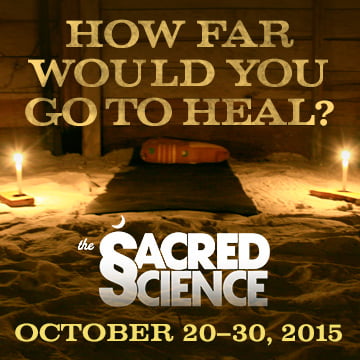 The Sacred Science follows eight people from around the world, with varying physical and psychological illnesses, as they embark on a one-month healing journey into the heart of the Amazon jungle.

You can watch this documentary film FREE for 10 days by clicking here.

“If “Survivor” was actually real and had stakes worth caring about, it would be what happens here, and “The Sacred Science” hopefully is merely one in a long line of exciting endeavors from this group.” – Billy Okeefe, McClatchy Tribune

Check out the film for FREE!