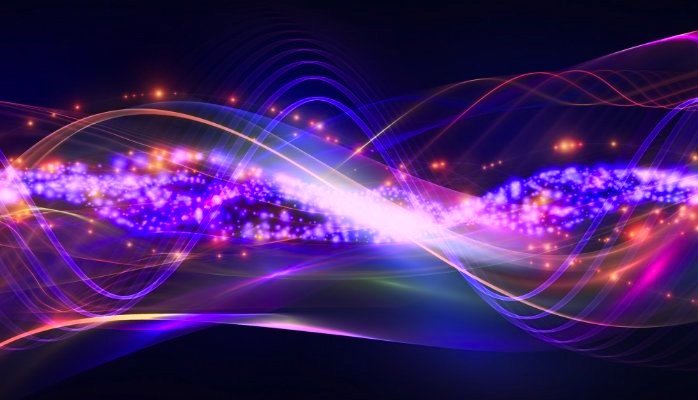 Like waves of vibration that are eternally connected and influenced by one another, our understanding and appreciation of vibro-tactile healing has ebbed and flowed. Ancient traditions recognized vibration and sound as an important method for returning to balance and healing. Some of the ways these traditions have used sound and vibration include: music, chanting, prayer, toning, and the use of instruments such as drums, bells, singing bowls, gongs, and wind instruments.

As Ancient traditions fell from favor, we lost sight of the powerful benefits of vibro-tactile healing. It has taken great thinkers and scientists millennia to return to this lost knowledge. Perhaps we are so comforted by vibration and sound because as humans, our first experiences within the womb were known and felt as vibration (e.g., our mother’s heartbeat and voice). All matter vibrates and the human body is no different.

It is known that sound waves move through water at least 5 times more efficiently than through the air and that the water in the human body accounts for at least 50-65% of its makeup. This makes the human body a receptive vessel for vibro-tactile input.

The lens through which the benefits of vibro-tactile healing have been filtered has changed with time and cultural knowledge.

The earliest known use of a vibro-tactile method for healing comes from the Aboriginal people of Australia, who have used the didgeridoo, a wind instrument made from hollowed limbs from eucalyptus trees, for at least 40,000 years. The sound frequencies that are produced by this fascinating instrument are low and both the person playing the instrument and the person hearing it feel the vibration produced. Healers in Australia have historically used this instrument to heal illness, muscle tears and even broken bones. Auditory rhythm has also been used to affect healing going back tens of thousands of years on every continent. Many indigenous shamans around the world continue to use vibro-tactile methods for healing and balancing dis-ease in the body. 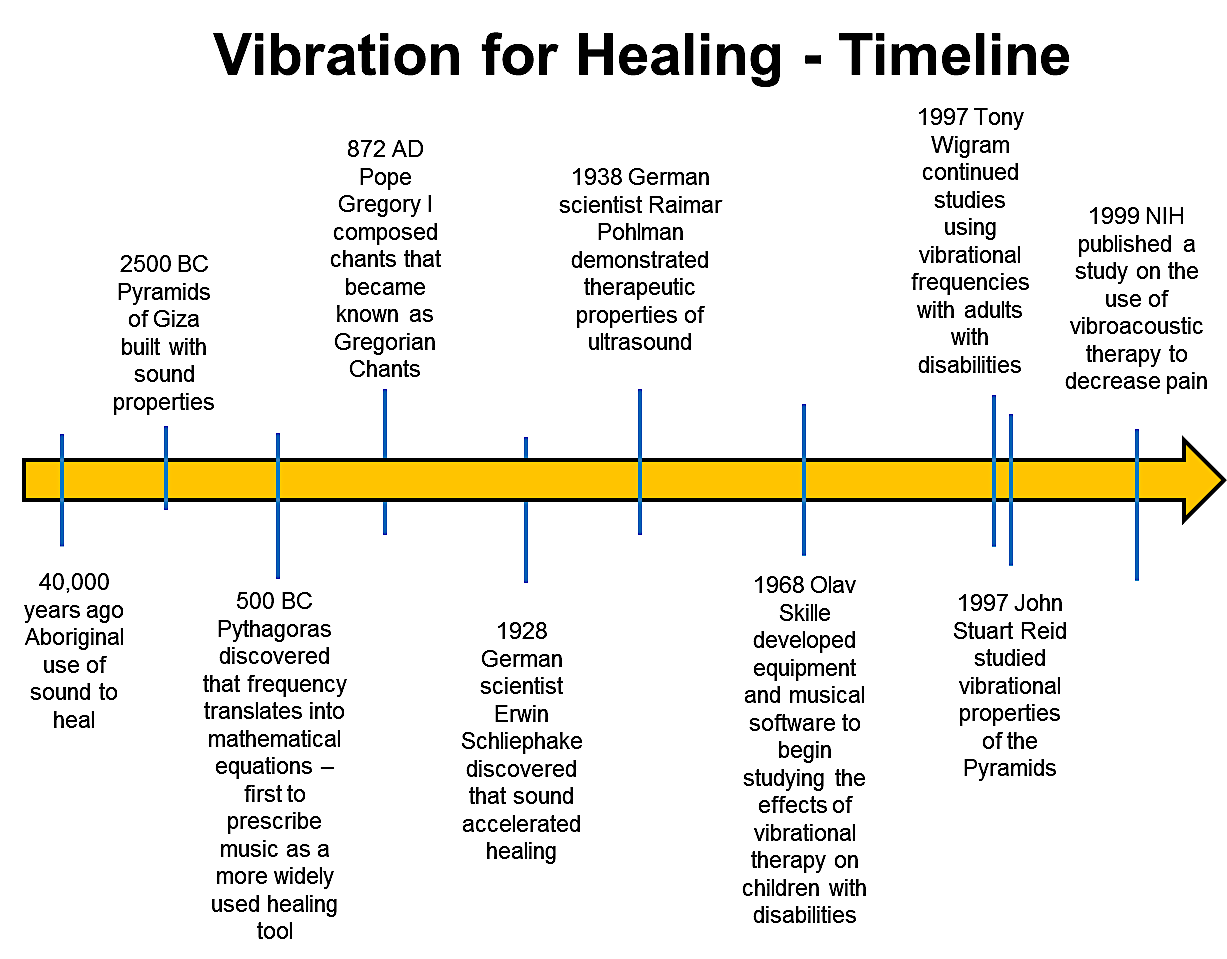 There has been much fascination, mystery, and acoustic research conducted in the Pyramids of Egypt. Much of the research has resulted in theories that have been used to discern the true purpose of the Pyramids and how they were constructed. There are many differing theories about the construction and purpose of the Pyramids but the one common linking factor is the way the structures resonate to sound. A deeper understanding has been awakened to the benefits of sound and vibration and has been fueled by the captivation of researchers working in the Pyramids.

One researcher, John Stuart Reid, found evidence that suggested the Egyptians designed the King’s Chamber in the Great Pyramid of Giza, to resonate in such a way as to enhance sound-based ceremonies that included chanting. Reid’s research led to the development of instrumentation to visualize vibration and sound using a CymaScope. An interesting side note to Reid’s acoustic research in the King’s Chamber is, as he worked and spent time in the chamber, he found that his chronic low back pain dissipated.

Another researcher, Alan Alford, closely examined the properties of the granite walls of the chambers and concluded that the Great Pyramid was uniquely designed to “sing”. Alford noted that the 43 beams in the King’s Chamber were constructed and specifically arranged to resonate with precise low frequencies. These infrasonic frequencies cannot be produced with the human voice, which suggests that the purpose was something other than singing or chanting. He speculated that the Great Pyramid was built as a giant “sound box” designed to harness the low frequency vibrations of the Earth.

(For more on this topic, please see the article: Pyramid Power: Harnessing the Energetic Fields of Pyramids.)

Moving forward in time to Ancient Greece, Pythagoras used the kithara (a type of lyre) as healing instrument and he reputedly was able to soothe both animals and people with his music. He termed what he did as “musical medicine”. When he was teaching in Crotona, he reportedly opened the day with songs that were designed to awaken the mind and prepare it to focus on the activities of the day. In the evening he used music to soothe and relax his students and prepare them for rest. Many of his students went on to use music for healing purposes.

In his investigation into the therapeutic value of harmonics, Pythagoras discovered that different keys had diverse effects on the emotions and had the potential to influence behavior. A famous example of this took place one evening when Pythagoras was out observing the stars. While star gazing he witnessed the scene of a young man, who was muddled by alcohol and in a fit of frantic emotion. The young man was wildly stacking kindling by the door of his mistress. Nearby, a musician played a stirring tune, which seemed to fuel the young man’s frenzy. Pythagoras asked the musician to change the tune to a slower, more rhythmic piece. The musician complied and with the change in tempo and rhythm, the young man’s agitation calmed. Once he was in a calmer state he quietly gathered the sticks and returned to his own home.

The use of sound made its way into “modern” medicine in 1928 when German scientist Erwin Schliephake discovered that short sound waves accelerated healing in cancer patients. In 1938 another German scientist named Raimar Pohlman went on to demonstrate the therapeutic properties of ultrasound.

Olav Skille and Tony Wigram have been driving forces behind our current understanding of Vibroacoustic Therapy as a research-based healing technique. Skille began his work and research in 1968 by developing equipment and music software to deliver vibro-tactile input to young people with Rett Syndrome in Scandinavia. He discovered Vibroacoustic Therapy to be beneficial for such conditions as asthma, autism, cystic fibrosis, cerebral palsy, insomnia, pain and Parkinson’s disease. He described the three main areas of effect from Vibroacoustic Therapy as being:

In England, Wigram began his own research in the 1990s, using some of Skille’s techniques to help adults with cognitive disabilities and behavioral challenges. He used the techniques with individuals with self-abusive behaviors and anxiety. The passion and dedicated research from both of these men has been invaluable to our understanding of sound and vibration as a healing modality.

In 1997, Butler studied patients undergoing open heart surgery and found that the use of vibro-tactile stimulation post-operatively reduced the need for and reliance on a ventilator and decreased the overall length of the hospital stay from 9 to 5 days.

In 1999, the National Institute of Health published research into the use of Vibroacoustic Therapy for addressing pain and symptoms that often accompany pain such as anxiety and depression. Although the results of the study were published in 1999, the study itself has been ongoing and continues to show similar positive results. There are presently a number of forward thinking hospitals in the United States that use Vibroacoustic Therapy as an adjunct to conventional treatments such as surgery and chemotherapy.

How Does Vibroacoustic Therapy Work – The Science

Vibroacoustic Therapy uses low frequencies and therapeutic music delivered through special speakers called transducers. The transducers can be embedded within some sort of furniture such as portable mats, mattresses, and massage tables, custom tables with water bladders, beds and recliners. As a person’s body has contact with the embedded speakers, the music is sent from the source into the transducers and then is felt by the body as vibration and heard by the ears as sound. The vibro-tactile input stimulates nerve bundles along the spine, up into the brain stem and then through the limbic system. In addition, the sound stimulates the medulla in the brain stem and activates the auditory nerve that connects with all the muscles of the body. These reactions signal the body to relax and flood the brain with mood lifting chemicals. In addition, the low frequencies also cause a relaxation of the tissues, and a dilation of blood vessels and an opening of the lymphatic pathways which in turn increases the body’s ability to heal.

A few of the positive responses to Vibroacoustic Therapy may include:

When Vibroacoustic Therapy is used in conjunction with other vibrational modalities, such as essential oils and Reiki, this creates what Don Estes calls “Sensory Resonance”, where the individual is bathed in harmonic frequencies that integrate the whole brain and body into a state of peace and calm. When the mind and body are in a calm state, all kinds of health benefits can occur.

1. The Limbic System is signaled to return to a calm state, and over time helps the body to become better at self-regulation and more resilient to stressors.

2. The Relaxation Response is activated, which creates a cascade of positive physical and emotional health benefits.

3. The heart rate slows and heart rate variability (HRV) improves, which is an indicator of stress resilience.

4. Blood pressure lowers, which reduces the risk of stroke and heart attack.

5. Muscles relax, which in turn can reduce pain from tension and spasms.

6. Pain lessens through a combination of increased relaxation and an increase of “happy” hormones.

7. Circulation increases, which nourishes the cells and organs.

In a day when people are seeking healthy alternatives for combating stress, pain, and illness, we should reconsider the Ancient wisdom of vibro-tactile input. Modern technology now makes it possible for this healing modality to be put into practice and available to a wider population.

Deb Wellmes, MA, SLP, ND is a Speech-Language Pathologist, Vibroacoustic Therapy specialist, Neuroplastician, and Reiki practitioner with a Doctor of Naturopathy degree. Her 35+ years of experience with developmentally disabled adults and her 7 years as a caregiver for her Mom infuse her current passion for natural healing work. She is developing an energetic resonance program for enhancing stress resilience.