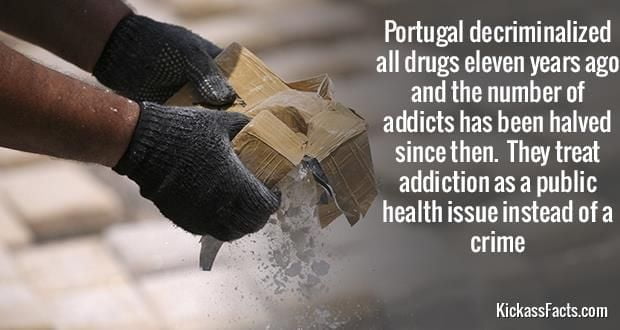 As diplomats gather at the United Nations in New York this week to consider the future of global drug policy, one Portuguese official, João Goulão, will likely command attention that far outstrips his country’s influence in practically any other area. That’s because 16 years ago, Portugal took a leap and decriminalized the possession of all drugs — everything from marijuana to heroin. By most measures, the move has paid off.

Today, Portuguese authorities don’t arrest anyone found holding what’s considered less than a 10-day supply of an illicit drug — a gram of heroin, ecstasy, or amphetamine, two grams of cocaine, or 25 grams of cannabis. Instead, drug offenders receive a citation and are ordered to appear before so- called “dissuasion panels” made up of legal, social, and psychological experts. Most cases are simply suspended. Individuals who repeatedly come before the panels may be prescribed treatment, ranging from motivational counseling to opiate substitution therapy.

“We had a lot of criticism at first,” recalled Goulão, a physician specializing in addiction treatment whose work led Portugal to reform its drug laws in 2000, and who is today its national drug coordinator. After decriminalizing, the first inquiries Portugal received from the International Narcotics Control Board — the quasi-judicial UN oversight body established by the UN drug convention system — were sharp and scolding.

“Now things have changed completely,” he went on. “We are pointed to as an example of best practices inside the spirit of the conventions.” Indeed, Werner Sipp, the new head of the board, said as much at the UN’s Commission on Narcotic Drugs in Vienna earlier this year.

‘It was the combination of the law and these services that made it a success. It’s very difficult to find people in Portugal who disagree with this model.’

Though often narrowly assessed in reference to its decriminalization law, Portugal’s experience over the last decade and a half speaks as much to its free public health system, extensive treatment programs, and the hard to quantify trickle down effects of the legislation. In a society where drugs are less stigmatized, problem users are more likely to seek out care. Police, even if they suspect someone of using drugs, are less likely to bother them. Though at least 25 countries have introduced some form of decriminalization, Portugal’s holistic model and its use of dissuasion panels sets it apart.

The rate of new HIV infections in Portugal has fallen precipitously since 2001, the year its law took effect, declining from 1,016 cases to only 56 in 2012. Overdose deaths decreased from 80 the year that decriminalization was enacted to only 16 in 2012. In the US, by comparison, more than 14,000 people died in 2014 from prescription opioid overdoses alone. Portugal’s current drug-induced death rate, three per million residents, is more than five times lower than the European Union’s average of 17.3, according to EU figures.

Related: Here’s What to Expect at the Big Drug Meeting This Week at the UN

When Portugal decided to decriminalize in 2000, many skeptics assumed that the number of users would skyrocket. That did not happen. With some exceptions, including a marginal increase among adolescents, drug use has fallen over the past 15 years and now ebbs and flows within overall trends in Europe. Portuguese officials estimate that by the late 1990s roughly one percent of Portugal’s population, around 100,000 people, were heroin users.

Today, “we estimate that we have 50,000, most of them under substitution treatment,” said Goulão before adding that he’s recently seen a small uptick in use of the drug, predominantly among former addicts that got clean. This reflects Portugal’s tenuous economic condition, he contends.

“People use drugs for one of two reasons — either to potentiate pleasures or relieve unpleasure — and the types of drugs and the type of people who use drugs carries a lot according to the conditions of life in the country,” he remarked.

Parallel harm reduction measures, such as needle exchanges and opioid substitution therapy using drugs like methadone and buprenorphine, he said, serve as a cushion to prevent the spread of communicable diseases and a rise in overdoses even if the number of users injecting heroin happens to increase for a period of time.

“I think harm reduction is not giving up on people,” said Goulão. “I think it is respecting their timings and assuming that even if someone is still using drugs, that person deserves the investment of the state in order to have a better and longer life.”

Such statements, once considered radical, are becoming more appealing to drug officials in other countries. Decriminalization and harm reduction lends greater attention to the human rights of users while allowing law enforcement resources to be spent elsewhere. And though it’s a major shift, Portuguese decriminalization is not a revolution in terms of international law.

Drugs are still illegal in Portugal, drug dealers and traffickers are still sent to jail, and the country has carefully kept itself within the confines of the UN’s drug convention system that inform national drug laws. For decades the three treaties were seen as prescribing jail time for users, but experts have long contended — and governments now increasingly recognize — that they give countries wide latitude in how to treat and police users.

When Portugal decriminalized, UN member states were just years removed from a 1998 special session of the General Assembly that convened under the fanciful pretext of eliminating drug use worldwide. On Tuesday, member states adopted a new outcome document that is meant to reposition drug policy. It stops short of what many advocates would have liked, excluding the actual words “harm reduction” while failing to address the death penalty for drug offenders, which member states noted repeatedly on Tuesday. The document reflects both an evolution in drug policy in many parts of the world over the last two decades, but is also a testament to the continued influence of conservative countries that still favor interdiction.

Related: How Russia Became the New Global Leader in the War on Drugs

Goulão himself is skeptical of some aspects of marijuana reform in places like the United States, which he says can conflate medical use with recreational markets. “Sometimes I feel the promoters of this discussion are mixing things together using a lack of intellectual seriousness,” he said.

Though heroin use is often highlighted to show the efficacy of Portugal’s model, today most users that come before panels are in fact caught with either hashish or cannabis, said Nuno Capaz, a sociologist who serves on Lisbon’s dissuasion panel. Between 80 to 85 percent of all people who report to the panels are first-time offenders and deemed to be recreational users, meaning their cases are suspended.

For those who have been repeatedly caught or are identified as addicts, the panels can order sanctions or treatment. Recreational users may face fines or be ordered to provide community service. If an addict refuses treatment, they are required to check in regularly with their “family doctor” — the medical professional in the person’s locality that provides checkups and other services to them under Portugal’s free national healthcare program. Such a close, pre-existing relationship between medical professionals and Portuguese residents is another feature of the model, and one that could be hard to replicate in a country like the US.

“If the person doesn’t show up at the doctor, we ask the police to personally hand them a notification so they know they are supposed to be in a specific place,” said Capaz. “The important part is to maintain the connection to the treatment system.”

The role of police coordinating with health officials to ensure treatment demonstrates the altered relationship between them and drug users over the past decade and a half, and one that contrasts dramatically with how police orient themselves in countries like the US.

“This small change actually makes a huge change in terms of police officers’ work,” said Capaz, referring to decriminalization. “Of course every police officer knows where people hang out to smoke joints. If they wanted to they would just go there and pick up the same guy over and over. That doesn’t happen.”

Working in parallel to government efforts, non-profit groups play a role in providing clean needles and even distributing crack pipes as a way to entice drug users into the network of state service providers.

Ricardo Fuertes, project coordinator at GAT, an outreach organization founded by people living with HIV, works at one of the group’s drop-in centers, nestled in a residential building in Lisbon. The location, he says, is a sign of the decrease in stigma towards drug use.

“It’s very obvious that it’s a place for people who use drugs. It’s very open, but we don’t have complaints,” said Fuertes, referring to the drop-in center. “The general population even comes to get tests done. I think it shows this isn’t a ghetto service.”

But care and outreach providers and the people they help have felt the pinch of Portugal’s economic troubles. In 2011, the country was bailed out by the European Union and the IMF, and later passed austerity measures that imposed considerable cuts on public services.

Goulão said that drug treatment programs have been relatively insulated, but funds for job programs that could help employers pay the wages of drug users were decreased. Fuertes went a bit further, saying that some providers have had to lower costs. He explained that government funding may be allocated only for a year at a time, making long-term planning difficult.

“It’s not easy for many people, and of course people who use drugs are not the exception,” he said. “We see many of our clients facing very difficult situations.”

Portuguese health workers refer to Greece as a cautionary tale. Wracked by a budgetary crisis and the austerity conditions of repeated bailouts, Greece experienced an explosion of HIV transmission rates after budget cuts left health programs drastically underfunded. According to EU figures, only Greece and Latvia experienced larger cuts than Portugal to its public health services between the period of 2005 to 2007 and 2009 to 2012.

And yet Portugal experienced no discernable rise in HIV transmission — the cushion effect in action.

“Usually the focus is on the decriminalization itself, but it worked because there were other services, and the coverage increased for needle replacement, detox, therapeutic communities, and employment options for people who use drugs,” said Fuertes. “It was the combination of the law and these services that made it a success. It’s very difficult to find people in Portugal who disagree with this model.”

In the run-up to the UN General Assembly’s special session, Goulão cautioned that countries had to consider their own domestic environments first in learning from Portugal’s experience.

“We don’t assume that this is the silver bullet, but in my view it has been very important because it introduced coherence into the whole system,” he said. “If our responses are based in the idea that we talking about addiction, that we are talking about chronic disease, talking about a health issue — to have it out of the penal system is a clear improvement. It was really important for our society because it allowed us to drop the stigma.” 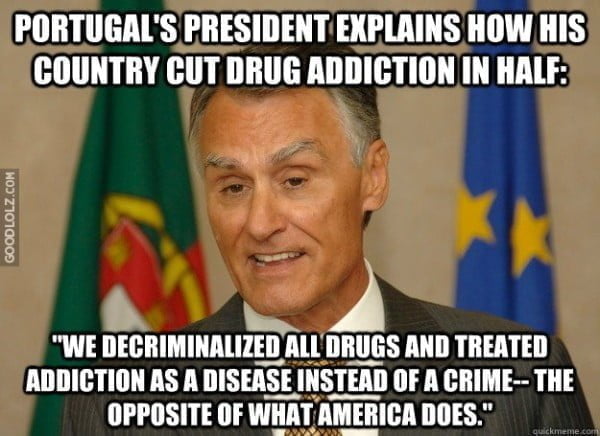 2 thoughts on “Portugal’s Example: What Happened After It Decriminalized All Drugs, From Weed to Heroin”