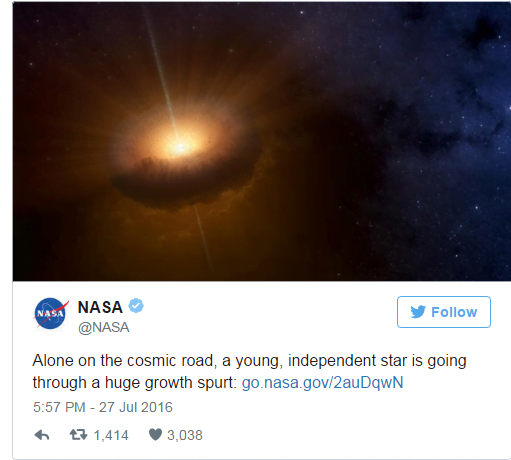 From NASA’s infrared survey and telescope data, scientists have detected an unusual celestial object in a bulge at the center of the Milky Way… No, not nougat, but an isolated young star.

CX330 is estimated to be less than 1 million years old, which is a very young age by the universe’s standards. And, as with any young body, it is going through a tremendous growth spurt by sending out jets of materials that “slam into the gas and dust around it.”

Scientists at NASA believe CX330 has been growing for several years, and that, over a three-year period, its brightness has increased by a few hundred times.

And it is also very lonely.

“CX330 (the young star) is not near any star-forming region,” said NASA in a statement.

It was “first detected as a source of X-ray light in 2009 by NASA’s Chandra X-Ray Observatory while it surveying the bulge in the central region of the Milky Way,” said NASA.

A 2016 study by the Royal Astronomical Society found the bright nugget in the bulge was “the most isolated young star that has been discovered.”

A further survey with NASA’s Wide-field Infrared Survey Explorer (WISE), which is tasked with imaging the entire sky in infrared, and data from its Spitzer Telescope came to the same conclusion.

CX330 has been compared to FU Orionis, a young outbursting star that had a similar growth spurt in 1936-7, but this young star is “more compact, hotter and likely more massive,” because it is more isolated.

“We tried various interpretations for it, and the only one that makes sense is that this rapidly growing young star is forming in the middle of nowhere,” said Chris Britt, lead author of the study on CX330 recently published in the Monthly Notices of the Royal Astronomical Society.

“The disk has probably heated to the point where the gas in the disk has become ionized, leading to a rapid increase in how fast the material falls onto the star,” said Thomas Maccarone, study co-author and associate professor at Texas Tech.

The young star may help scientists understand the way stars form under different circumstances but they don’t think planets are forming in CX330’s system because of its increasing voracity.

“If it’s truly a massive star, its lifetime is short and violent, and I wouldn’t recommend being a planet around it,” said Joel Green, study co-author and researcher at the Space Telescope Institute in Baltimore. “You could experience some pretty intense heat for a few centuries.”

Then it will just be melted nougat in the Milky Way.