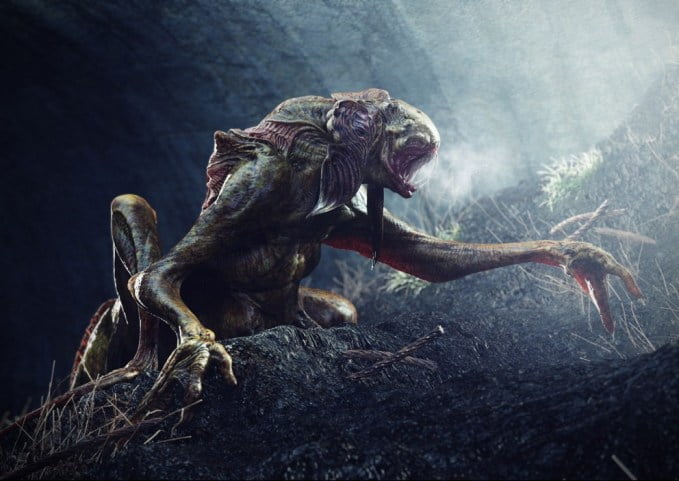 by David Icke
The reptilian and other entities, which are manipulating our world by possessing “human” bodies, operate in frequencies between the Third and Fourth densities.

These are referred to as “hidden spaces and planes unknown to man”, in the apparently ancient Emerald Tablets, which I quote from in “Children of the Matrix”. For simplicity, I refer to this “between world” in my books as the lower fourth dimension.

It is from here that they police our vibrational prison – the Matrix – and seek to addict and restrict us to the dense physical senses. This world was once far less dense than it is today and the “fall” down the frequencies, caused by the manipulation of incarnate consciousness and DNA infiltration, has made it so much more difficult to maintain a multi-dimensional connection while in physical form.

We are now in a cycle of change when the vibration of this “world” will be raised out of dense physicality and return to where it once was. In doing so, the reptilians’ ability to manipulate our physical form will be removed and this is why they are in such a panic at this time to prevent this shift from opening the vibrational prison door.

The reptilians and other manipulating entities exist only just outside the frequency range of our physical senses. Their own physical form has broken down and they can no longer re-produce.

Thus they have sought to infiltrate human form and so use that to exist and control in this dimension. They chose the Earth for this infiltration because it most resembles in vibration the locations from which they originate.

These reptilians are addicted to the dense physical “world” and the sensations it offers and they have no desire to advance higher. Their aim in this period is to stop the Earth and incarnate humanity from making the shift from dense physical prison into multi-dimensional paradise.

From what I understand, this dense physical world is caught in a manufactured time “loop”, in which “time” is a circle, constantly repeating itself. Note that one of the ancient symbols for “infinity” is the snake swallowing its own tail. The pentagram or five-pointed star, so prevalent in Satanism, is also symbolic of this unbroken “time” cycle, the vibrational prison.

The period we are now experiencing has, therefore, been played out before. We are just at that point again in the repeating circle or cycle, like a rat running on one of those wheels in a cage. No matter how fast it runs, it keeps covering the same ground. What we need to do is break the “time” circle and thus the prison.

We are now in that part of the circle that is most vulnerable to this because of the vibrational changes taking place in this part of the Universe and this is why the control of humans has tightened so rapidly in this period – they are doing everything they can to defend their prison from the awakening of the inmates.  “The micro-chip is crucial to that”

These reptilians and their allies have corrupted Earth DNA with their own and this genetic infiltration lies dormant until it is activated by the vibrational fields generated by the Illuminati secret society rituals, and others in the public eye like the carefully designed coronations and official ceremonies of many kinds, including even the UK State Opening of Parliament and certainly those of the various religions.

This activation is now also being inflicted upon the general population through technology on Earth and in space, no doubt, and this channeled entity said that the cloning program is there to develop designer bodies for the reptilians of the “in between world” that would not require the overpowering of an already incarnate consciousness.]

Once activated, the DNA opens the body to possession by these reptilians and other beings, and this is what is happening, for example, to Freemasons in the rituals that most of them deliver parrot fashion while having no idea of their vibrational significance. This is why the Illuminati are so obsessed with knowing a person’s bloodline. They know which have the potential for this activation and possession and which do not.

The Mormon Church genealogical data base and now the DNA data banks are designed to identify those with the bloodline.

These are the people who are given jobs and roles that serve the Illuminati agenda, while most of them have no idea what is really going on and what they are being used for. Their DNA is then activated and they go through a change of character (a phrase I have heard so many times in relation to such people once they advance in the system) and a very different consciousness takes over their mental and emotional processes.

This is why it is so important for everyone to stay well clear of ritual, no matter how innocent it may appear on the surface. I would include “New Age” ritual in this, too. I don’t mean standing in a circle, connecting together and projecting loving thoughts, etc. I mean carefully constructed ritual that is constantly repeated, as with religious ceremony for example. I am beginning to realize why I have had a life-long aversion to taking part in ritual of any kind.

Each new generation of the Illuminati bloodline families is exposed to the appropriate ritual to activate their possession by the reptilian entities and so the cycle goes on. The phrase that comes to mind is “…forgive them for they know not what they do.”

P.S.: Apparently, this DNA infiltration is known within the inner circles of the British royal family as the “family disease”. They are actually in fear of it because they know that once it is activated they will be taken over.

But of course they are caught in a world of constant ritual and ceremony designed specifically to activate their possession. It is catch 22. Without the ritual they cannot be the royal family, but with the ritual they are activated and possessed. The thought and emotional processes of the UK’s Queen Mother are not those of Elizabeth Bowes-Lyon, the little girl officially born into that body 101 years ago.

They are controlled by the reptilian entity or entities, which possessed her after the hybrid DNA activation.

This Article First Appeared on: http://locklip.com