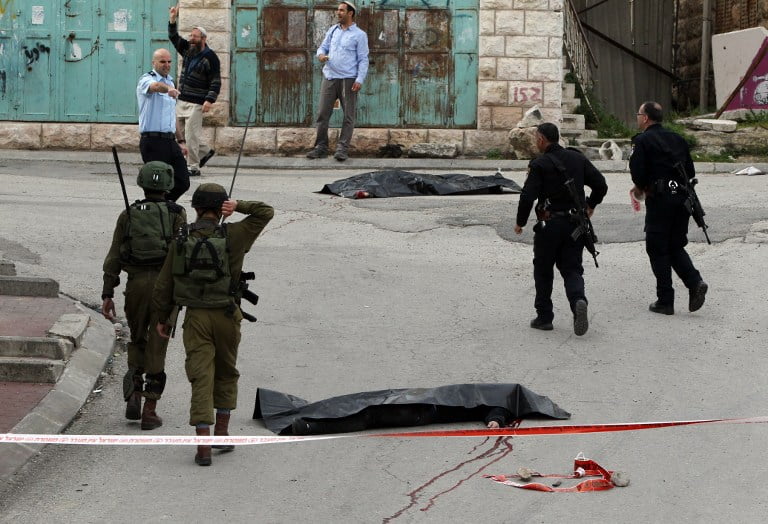 Shooting at the heads of incapacitated alleged Palestinian attackers is a common practice by Israeli occupation forces, a settler security chief told a military court hearing on Sunday.

Eliyahu Liebman testified as a witness for the defense in the trial of Elor Azarya, an Israeli soldier indicted for manslaughter after he was caught on video shooting the head of a wounded and incapacitated Palestinian lying in the street, killing him.

Abd al-Fattah al-Sharif and Ramzi al-Qasrawi were fatally wounded after they allegedly attempted to stab soldiers in the occupied West Bank city of Hebron in late March. Multiple videos of the scene show al-Sharif and al-Qasrawi in the street, badly injured. But video released thus far only shows the fatal shooting of al-Sharif.

“In terrorist incidents I witnessed, I saw with my own eyes that in every instance in which a terrorist attacked, soldiers shot him in the center of mass until he was neutralized … and [shot] a bullet to the head to ensure that the terrorist could not set off a suicide belt or continue the attack. These soldiers never went to court,” Liebman, the longtime civilian security chief for Jewish settlers in Hebron, told the court.

“A ‘neutralized terrorist’ means: either he attempted to carry out an attack and was shot in the chest and killed and then shot in the head to make sure – as is taught in the IDF [Israeli army] according to the rules of opening fire – or it means that the terrorist was checked by a sapper and was cuffed by the hands and feet,” Liebmanadded.

That protocol may have been implemented in other occasions in recent months.

In the Christmas Day slaying of Mahdia Hammad, a 40-year-old mother from Silwad village near the West Bank city of Ramallah, a combatant with Israel’s paramilitary Border Police “thrust his rifle into the bullet-riddled car and fired another volley into [Hammad’s] head, even though she was certainly dead by then,” the Tel Aviv newspaper Haaretz reported.

The Palestinian Centre for Human Rights reported that soldiers shot at the head of Mazen Oraibi at point-blank range after Oraibi was already dead. Oraibi, a Palestinian Authority security forces officer, was killed after he allegedly opened fire on soldiers at a checkpoint in December.

Another soldier under investigation

Another Israeli soldier who shot an unarmed Palestinian in the West Bank on Friday is being investigated for involuntary manslaughter, Israeli media reported on Monday.

The army has admitted that Iyad Zakariya Hamad, 38, posed no threat when he was shot near a military post at the entrance to the village of Silwad, near Ramallah, Haaretz stated.

The army maintains that Hamad was running toward a military post and did not heed soldiers’ orders to halt when he was shot.

A Palestinian paramedic told Haaretz reporter Gideon Levy that he believes Hamad was shot in the back. “He saw an entry wound in the victim’s back and an exit wound in his chest,” Levy said of the paramedic.

A witness told the Israeli rights group B’Tselem that Hamad, who was on his way to a mosque for Friday prayers, “had lost his way, panicked when he saw the soldiers at the checkpoint and ran,” according to Levy.

The soldier under investigation, who was not named by media, is from the ultra-Orthodox Netzah Yehuda battalion. Last year, soldiers from that unit were caught on video brutally beating a Palestinian father, and, in a separate incident, filmed themselves shooting an unarmed person in Silwad.

Hamad is the 220nd Palestinian slain by Israeli uniformed forces and armed civilians during a new phase of deadly confrontation that began in October, according to the Ma’an News Agency. More than 30 Israelis were killed during that same period.

Dozens of Palestinians were shot dead during what Israel says were attacks or alleged attacks on soldiers and civilians. Human rights groups have condemned Israel’s reflexive use of deadly force in such incidents, saying it amounts to an unofficial shoot-to-kill policy encouraged by Israel’s top leadership.

The United Nations High Commissioner for Human Rights has also called for full investigation of incidents in which Israeli forces have caused death and injury. And in a rare display of protest, a ranking US Senator, along with 10 members of Congress, called on the State Department to investigate possible extrajudicial executions by Israeli military and police.

Video footage of many of such incidents – not only Elor Azarya’s killing of Abd al-Fattah al-Sharif– shows that lethal force was used against Palestinians when they posed no immediate, life-threatening danger.

It was revealed during the Azarya trial that Israeli forces are instructed to quickly clear the scene when Palestinians are shot dead, to discourage documentation of the incident that would fuel Palestinian outrage.

During his June testimony, Israeli colonel Yariv Ben-Ezra referred to the case of Hadil Hashlamoun, a young woman who was shot dead at a checkpoint in Hebron last September.

Video of the incident showed the young woman bleeding to death on the sidewalk without receiving first aid as Israeli settlers and soldiers stand around, some of them smiling and laughing.

Israel claimed that Hashlamoun had tried to stab a soldier, but photos and eyewitnesses contradicted the army’s narrative. Amnesty International described the incident as an extrajudicial execution.

“We noticed that the long time that her body remained at the scene, while being filmed and photographed, created an entire wave of revenge and solidarity attacks – not just in Hebron, but all over the West Bank,” Ben-Ezra said.

“From one incident to the next, we got a better understanding, and in light of the lessons we learned and the investigations we conducted, we realized that as soon as there is an attack in a crowded urban area, which is flooded with cameras on both sides, we must clear the scene as fast as possible, to prevent revenge and solidarity attacks. That is how we trained the soldiers,” Ben-Ezra added.

Only a handful of prosecutions

Since the year 2000, in only a handful of cases were soldiers prosecuted for manslaughter in relation to the slaying of Palestinians, according to Haaretz.

Of the four cases identified by the paper, in addition to Azarya and the unnamed soldier who killed Iyad Hamad, only one soldier was convicted of manslaughter and served a six-and-a-half-year prison sentence. In other cases, soldiers were convicted of lesser charges and demoted in military rank.

Ben Dery, a military police combatant, is currently on trial for manslaughter in the shooting and killing ofNadim Siam Nuwara, 17, who was seen on video being fatally wounded during a Nakba Day protest in May 2014.

Dery is accused of switching “the blanks in his M16 with live bullets, although the forces on the scene had been instructed to use rubber-tipped steel bullets,” according to Haaretz.

Another Palestinian boy, Muhammad Abu al-Thahir, 16, was killed during the same demonstration as Nuwara. No one has been charged with killing Abu al-Thahir.

The Israeli military ordered Fakher Zayed, the Palestinian whose security cameras recorded the footage of the youths being shot, to dismantle his cameras or face legal proceedings.

This Article First Appeared On: https://electronicintifada.net