Prepare For Change
Home Disclosure WikiLeaks: The US Strategy to Create a New Global Legal and Economic... 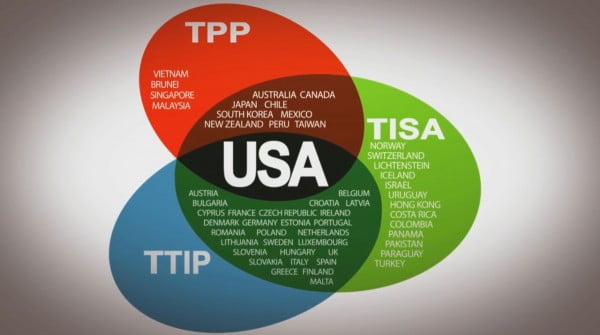 America is trying to bypass the WTO by creating the biggest international agreements that the world has ever seen.

They’re all being negotiated in secret right now, and the world is only aware of them because WikiLeaks was able to leak parts of them. When you look across all of these deals, China is excluded, as well as Brazil, Russia, India and South Africa: the BRICS Alliance.

These agreements are part of a geopolitical war being fought mainly between the United States and China. The US Government is scared of the rise of China, so it has moved to militarily encircle it, through what they’ve dubbed the “Pivot to Asia”. It’s also moving to do this economically.

The basic idea expressed in US strategy papers is for the construction of a new “grand enclosure”, which includes the United States and 51 other countries: 1.6 billion people and two-thirds of global GDP. The strategy is to break trade ties within Latin America, away from Brazil and towards the US, to do the same in Southeast Asia, away from China and towards the US and to pull Western Europe away from Eurasia and towards the Atlantic with the “Big Ts”.

WikiLeaks revealed four chapters of the TPP which affects 12 countries in the Americas and Southeast Asia. They also obtained parts of TISA, which affects 52 countries, including the EU but nearly all of it is still a secret. Nobody knows about what’s being negotiated in our name. These far-reaching deals are going to radically alter our economies and our societies and yet even elected congresspeople and parliamentarians know nothing about it.

The world’s biggest corporations, however, don’t have the same problem they have been receiving VIP access from day one and have had abundant influence in the negotiations. Everyday people are excluded from knowing the details; governments are also largely excluded.

Those who ARE included are the multinational corporations. The “Three Big Ts” are basically corporate ownership agreements. They’re about enshrining investor rights and ensuring that these corporations can run wild in these countries, with very very little regulation by government.

These treaties will have huge implications for almost every critical issue that an individual citizen or community would care about health, education, the environment, privacy and access to medicines – and the list could go on.

One of the most criticized aspects is the “Investor-State Dispute Settlement” system (ISDS). It’s a secretive international tribunal that allows companies to sue states over virtually anything that they can claim affects investment. If anything affects their profits, they can sue. US corporations would be able to sue the governments of Europe in a parallel judicial system which is available to them, alone!

If the TTP passes with ISDS in it, the privatization of the National Health Service which is happening in the UK can never be reversed.

What is democratic about an enormous imposition of power on countries whose citizens have no way of knowing what’s going on or of debating it or influencing their government in its decision? It’s anti-democratic. The history of these agreements shows that they’re difficult to change unless people can see what’s in them – and that’s why they’ve been kept secret because when the contents are revealed, it will generate opposition.

WikiLeaks has had considerable success in delaying the passage of the TPP and opening up the debate around it and TISA by releasing the secret draft text. Their publication of an earlier proposed US-EU agreement killed it entirely and helped the world become a more transparent place.

This Article First Appeared On: http://forbiddenknowledgetv.net/