Prepare For Change
Home Awakening HOW SLAVERY WAS NEVER ABOLISHED & SIMPLY EVOLVED INTO THE PRISON SYSTEM... 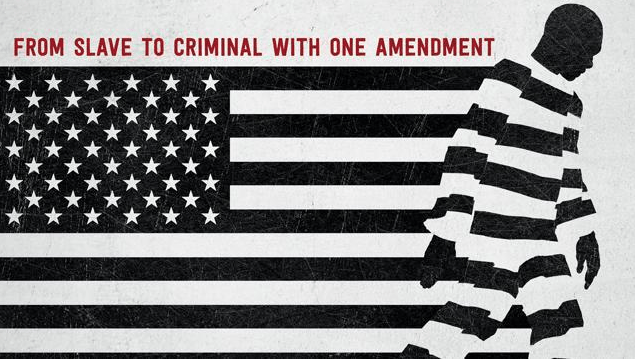 To many, the end of the Civil War in 1865 represented the end of slavery; at least, that’s what the history books tell us. In January of 1865, the Thirteenth Amendment was passed, freeing millions of black citizens as they finally received emancipation. The Thirteenth Amendment reads: “Neither slavery nor involuntary servitude, except as a punishment for crime whereof the party shall have been duly convicted, shall exist within the United States, or any place subject to their jurisdiction.”

It is clear that a loophole exists, which allows slavery to continue within the confines of prison walls. The documentary 13th explores how slavery was never abolished, but actually shifted into the modern prison system, ultimately fuelling mass incarceration of black citizens. In fact, 1 in 3 black males will serve jail time at some point in their lives, whereas only 1 in 17 white men will. Don’t let government propaganda fool you: The only reasons for mass incarceration in the U.S. are racism and profit.

The seemingly obvious motive behind imprisoning black citizens is racism, which didn’t just disappear post-Civil War. The documentary starts off by exploring the incredibly racist 1915 Hollywood film Birth of a Nation. Headline after headline glorified the movie, as it marked a huge step for cinematic realism. The mainstream media loved it and so did an overwhelmingly large section of the U.S. population, including the White House, which held a private screening of the film. The movie featured many horrific acts of the Ku Klux Klan (KKK) against the black community, and actually dignified their behaviour. The film was partly blamed for the rebirth of the KKK in years to follow and made it clear that racism was still widespread.

It’s no secret that governments, corporations, and the elite control mainstream media so they can produce and feed propaganda to the public. The documentary explains that most of the arrests televised are about people with darker skin colours and the media constantly vilifies black citizens, adding to the mythology of black criminality. You never see any of the positive news, or real news for that matter, on these outlets, especially regarding black people. This has been evident throughout history and remains an issue to this day, which you can see within the Black Lives Matter movement and police brutality. Cops aren’t held accountable for their actions, innocent black people that havedied as a result of police brutality are wrongly blamed by mainstream media for their own deaths, and Black Lives Matter protests are largely ignored by the media.

Here’s a trailer for the documentary, 13th, available on Netflix:

How the Government Planned to Mass Imprison Black People

“Jim Crow” is the slang term used by Americans to refer to a set of anti-black laws, many of which lasted in the Southern states until the mid-late 1900s. These laws prevented black citizens from enjoying basic human rights, with some cities even banning them from living there. The Civil Rights and Voting Rights movements played a significant role in changing these laws; however, the discrimination was simply redirected.

Around the same time, crime surged across America. In what was presumed to be a response to the heightened criminal activity, President Richard Nixon started promoting the “law and order” mentality and eventually waged a “war on drugs” in 1971. Disguised as a tactic to decrease drug usage, this was actually a strategy to incarcerate people by the masses, particularly black citizens. Between 1970 and 1980, the U.S. prison population increased from around 300K to 500K.

The Nixon campaign in 1968, and the Nixon White House after that, had two enemies: the antiwar left and black people. You understand what I’m saying? We knew we couldn’t make it illegal to be either against the war or black, but by getting the public to associate the hippies with marijuana and blacks with heroin, and then criminalizing both heavily, we could disrupt those communities. We could arrest their leaders, raid their homes, break up their meetings, and vilify them night after night on the evening news. Did we know we were lying about the drugs? Of course we did.

Ronald Reagan’s era was no different, except politicians’ language transitioned to more coded anti-black statements. Since it was no longer socially acceptable to say the “N word,” politicians started using terms like state’s rights and forced-busing to appeal to white supremacists. The Reagan government continued to arrest people by the masses for minor crimes, as the U.S. prison population grew to 700K in 1985 and reached approximately 1.2 million by 1990.

With the rise of the Clintons, the situation worsened significantly. Bill implemented the “three strikes” rule, whereby an individual, once convicted of three crimes, would go to jail for life. At around the same time, Hillary Clinton coined the term “super-predators,” a racially-coded word for black criminals. By 2000, the U.S. prison population had almost doubled, skyrocketing to over 2 million. By the time Bill Clinton left the Oval Office in 2001, the U.S. had the highest incarceration rate in the world. Despite the fact that Bill has apologized for playing a substantial role in mass incarcerating Americans, he recently exposed his true colours by defending his and his wife’s actions.

How Corporations Profit From Imprisoning People

Corporations reap the benefits from the privatization of prisons, which in this case is profits. The documentary does an incredible job of explaining ALEC (American Legislative Exchange Council), a private special interests group of politicians and corporations, and the role the organization has had in influencing, and in some cases even writing, laws.

Some of the legislation ALEC helped develop supports harsher and longer prison sentences as well as the privatization of prisons. It’s important to note that one of the organizations that funds ALEC is Corrections Corporations of America (CCA). This means that the more bodies that are in prisons, the more CCA profits, and thus the more money ALEC gets.

The American Bail Coalition (ABC), an organization that profits from the privatization of bail, also holds close ties to ALEC. ABC was one of the few corporations that actually stayed with ALEC after their involvement in creating the Stand Your Ground law in Florida came to the spotlight. This law was particularly controversial because it essentially allowed George Zimmerman to get away with stalking and murdering a black teenager, Trayvon Martin.

The entire U.S. prison industrial complex is a money-making machine, producing a grand total of $80 billion per year. Many corporations also profit from prison labour, which could reasonably be considered slave labour in North America, as some prisoners are paid as little as 12 cents an hour for their services. Examples of corporations that “employ” prisoners and pay them practically nothing include Victoria’s Secret and Walmart.

I would highly recommend watching the documentary 13th. It’s available on Netflix and dives deep into the U.S. prison system and related topics, some of which weren’t even addressed in this article. Black males represent only 6.5% of the U.S. population, yet 40% of U.S. prisoners are black men. This is not a coincidence; it is the result of a long-term plan implemented by the U.S. government and corporate giants.

Although the U.S. represents only 5% of the global population, it’s home to about 25% of the world’s prisoners. The quality of living for U.S. prisoners is poor, their mental health issues often go unaddressed, and their sentences are significantly longer, on average, than in other countries. How can we expect criminals to learn from their actions if we aren’t giving them the help they need? There are prisons all over the world that are more humane and actually decrease the likelihood that their prisoners will commit a crime again after being released (read our article about a Norwegian prison here). Prisoners are human beings, and it’s time we start treating them like people instead of slaves.