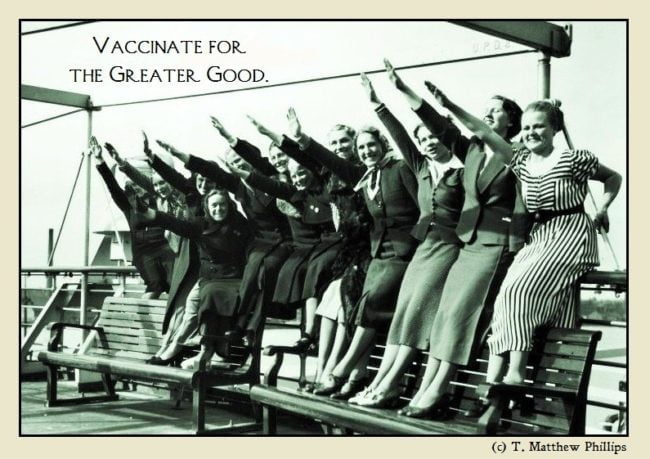 Ask not how it could happen; ask why it doesn’t happen more often. I have heard eyewitness accounts of NAZI concentration camps just after liberation in 1945.

I have seen haunting photos of bulldozers piling-up mountains of naked human corpses. In NAZI Germany, this was all legal.

The NAZIs simply passed laws that legalized murder and nobody challenged them because dissent was impossible.

California now legalizes murder under Senate Bill 277 – and too few challenge it because dissent is nearly impossible.

You’ll know it’s a Holocaust once you realize how powerless you are to challenge it.

Humanity has made no progress since 1945. In the name of unbridled capitalism, we Americans have kept the world at war since 1945, which means there’s been no progress in the understanding of one’s fellow man.

But our American brand of fascism differs from German-style fascism; theirs grew out of poverty and desperation, while ours, curiously enough, emerges from corporate prosperity.

But in the final analysis, all totalitarian regimes are based on the same thing – the raw power of the state to kill with impunity.

The State of California now asserts the raw power to inject your children – with whichever chemicals, bacteria, and viruses they deem necessary – and you have no right to “informed consent,” which means (1) no right to be apprised of the risk and (2) no ability to opt-out.

And despite the obvious fact that all vaccines carry an appreciable degree of risk, the state refuses to apprise you of those risks precisely because you have no right to opt-out. That’s why they call it “mandatory” vaccination.

Mandatory vaccination is much like “selective service” – your child is drafted, against your will, and forced to join the Army and carry a rifle to fight the War on Measles – and you must accept the risk that your child may get shot down in the defense of the nation.

And when they begin with mandatory childhood anti-cancer vaccination, don’t be surprised to see Congress issuing gold stars to parents whose children have fallen in the War on Cancer.

But when America fights ideological wars, e.g., War on Terrur, War on Measles, etc., “informed consent” is abolished in the name of the greater good whose right to security and comfort are paramount to an individual’s right to life.

When they gassed people in the concentration camps, NAZI law required that only medical doctors could pull the lever releasing the deadly Zyklon-B gas.

NAZI law assigned to doctors the actual task of killing because, under NAZI law, the act of mass murder in the gas chamber was conveniently deemed to be a “medical procedure.”

More curious still, in America, we purposely avoid calling vaccination a “medical procedure” specifically because, in order to achieve high vaccination rates, we allow any Tom, Dick or Harry to administer vaccines.

And don’t forget, in America, you have no right to sue for vaccination-gone-wrong, so there’s really no need to bother having a trained medical professional administer the vaccines.

If an unskilled vaccinator pierces the wrong portion of your deltoid muscle, (upper arm), and paralysis ensues, then – oh well! You cannot sue for “negligent needle placement” any more than you can sue for ASD or GBS.

To which nation shall they emigrate? The sad truth is, there’s nowhere to go because Obama’s vaccine mandate has gone global.

And when they start herding anti-vaxxers into FEMA Camps, there will be no Gen. George S. Patton and no Third Army to come to our rescue…

Remember, it didn’t begin with gas chambers in NAZI Germany; it began when people grew desensitized, intolerant of opposing views, mindlessly obedient to authority, and totally willing to follow orders instead of their own conscience.

It begins when folks willingly turn a blind eye to injustice – so long as their own paycheck continues uninterrupted.

Fascism lay not around the corner – it’s here. Right now. The American Holocaust has begun.

No, you won’t see any swastikas. We don’t need to build Dachaus and Auschwitzes because the mass media builds concentration camps in the mind – which are far more effective for controlling humans and getting them to march in lockstep.

No, we won’t wake-up one morning and suddenly find ourselves in gray, wool uniforms, goose-stepping off to work; but this is not the point.

The point is:  what happens to the individual who dissents? In Nazi Germany, he or she was physically destroyed, like Sophie Scholl, a 22-year old college student, brutally beheaded by NAZIs. (“Denken Sie daran, die weiße Rose.”)

Today in America, the process is more subtle; but the end always justify their means.

We all know it’s true – this is no longer the dreamland America in which we were born or in which we once believed. And to make matters worse, there’s a population explosion, which serves only to lessen our commitment to the sanctity of individual liberties and human life.

Add to that, a perpetual gov’t budget crisis, with far less resources for individual rights, and the feedback loop begins in earnest. Fascism only encourages more fascists.

Nowadays, our lawmakers deceive the public as if it were the natural prerogative of their office.

Today, we live in a brave, new Orwellian world where the individual exists for the state and the well-being of the greater good justifies each and every immoral act the state hurls towards the individual.

We have reached a time in our country – similar to what life must have been like in 1930s NAZI Germany – except we don’t realize it because American Fascism wears the smiling disguise of liberal democracy.

The state makes you believe that you live in the best of all possible worlds – so long as the state remains in total control over every aspect of your life.

Ignorance is not strength – it’s just sad. War is not peace – war is over if you want it. And freedom is not slavery – unless you go along with it. Live vaccine free! #ResistNow

Attorney T. Matthew Phillips and RevoltRevokeRestore.com are now suing to stop mandatory vaccination in California.  Note: any mention of this lawsuit is forbidden in the lame-stream media – because their ad revenue comes from drug companies – who forbid news outlets from mentioning this lawsuit!  Just say “No!” to censorship – tell others about this lawsuit!