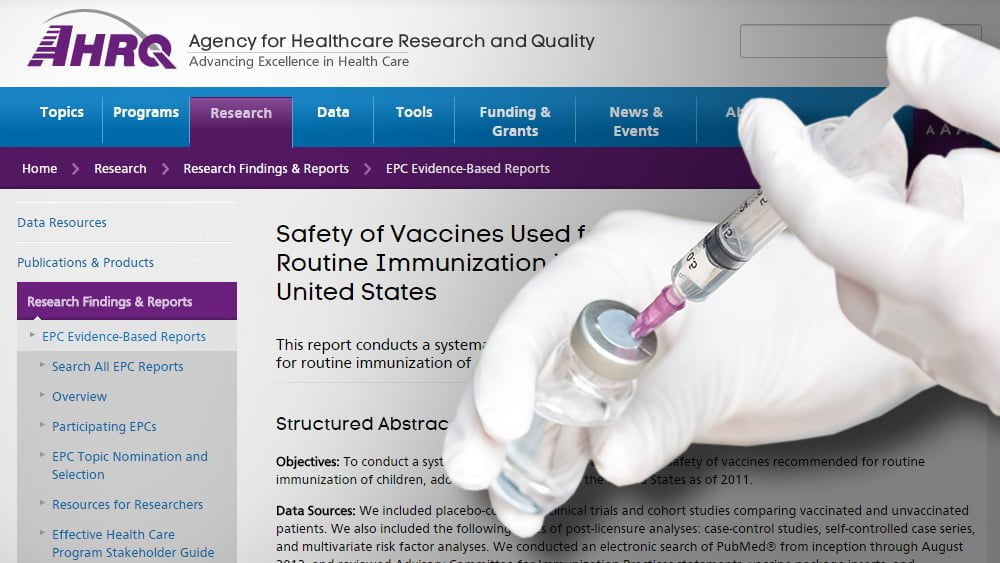 (Natural News) A little-known vaccine safety review published by RAND Corporation in 2014 and labeled a “RAND External Publication” reveals that vaccines are almost certainly causing serious, permanent damage in some children. Titled Safety of Vaccines Used for Routine Immunization in the United States, the analysis was published in Evidence Report/Technology Assessment No. 215 (Prepared by Southern California/RAND Evidence-Based Practice Center, under Contract No. 290-2007-10062-1). AHRQ Publication No. 14-E002-EF. (Rockville, MD: Agency for Healthcare Research and Quality, July 2014), 740 p

As a starting point, the paper takes for granted the Institute of Medicine’s 2011 pro-vaccine paper titled, “Adverse Effects of Vaccines: Evidence and Causality.” The IOM, of course, has already been exposed for researchers having financial ties to the vaccine industry, bringing into question the IOM’s neutrality on the issue of vaccine safety.

Yet even when RAND accepts the IOM position as “trustworthy,” RAND’s own researchers independently find that vaccines cause serious, permanent side effects in some children.

This is even true when the RAND analysis excludes the most toxic vaccines that have been discontinued. As stated in the executive summary of the paper:

Studies using formulations never available or discontinued in the United States were excluded at full-text review (e.g., H5N1 vaccine, vaccines with the squalene adjuvant ASO3, and BCG vaccine against tuberculosis).

This means that vaccines which were found to be so damaging that they were pulled from the market are NOT included in the analysis below. Thus, the real story here is that vaccines have been causing a greater number of serious adverse events than even this RAND analysis admits.

Even more shockingly, the entire database of voluntarily reported vaccine adverse events was excluded from this analysis, meaning the conclusions vastly underestimate real-world vaccine side effects. As stated in the executive summary: (bold added)

Passive surveillance systems such as the U.S. Vaccine Adverse Event Reporting System are crucial in identifying signals regarding AEs postlicensure, but they are not designed to assess a statistical association so were excluded from this project.

Even when VAERS data were excluded and the most toxic vaccines were excluded because they were pulled from the market, the analysis still finds convincing evidence that links vaccines to a vast array of neurological and biological disorders. Keep in mind that this analysis also excludes any consideration of real-world vaccine catastrophes such as 75% of the children being hospitalized after routine vaccinations in a small town in Mexico.

According to the RAND analysis, Strength of Evidence (SOE) was determined to be HIGH for:

Evidence “favors acceptance” of a causal relationship between MMR and transient arthralgia.

* The flu shot causing arthralgia, myalgia, malaise, fever and pain at injection site. (Arthralgia is defined as “Sharp, severe pain, extending along a nerve or group of nerves, experienced in a joint and/or joints.”)

* Flu shots NOT causing cardiovascular events in the elderly.

* MMR vaccines NOT causing autism spectrum disorders, yet the abstract also admits the data are sketchy: “The vast majority of studies either did not investigate or could not identify risk factors for adverse events (AEs) associated with vaccination. Similarly, the severity of AEs was inconsistently reported, as was information that would make independent severity determination possible.”

* Chicken pox vaccines having “high” strength of evidence for causing pneumonia, meningitis and hepatitis in some individuals, along with “vaccine viral strain reactivation” leading to infections that cause meningitis or encephalitis in some immunocompromised individuals. From the results table published in the study:

Keep in mind that the entire pro-vaccine “fake science” media automatically labels anyone who claims vaccines cause any harm whatsoever to be “anti-science.” Yet the RAND analysis reaches the exact same conclusion as vaccine critics, even when swallowing the IOM’s report as a biased pro-vaccine starting point: It is irrefutable that vaccines cause serious harm in some children. Any person who denies that simple truth is not a scientist; they are a propagandist.

“Some vaccines are associated with serious adverse events…”

The conclusion of the analysis blows away the false narrative of the CDC and the “fake news” mainstream media, which ridiculously (and routinely) claims that vaccines never have side effects and harm no children whatsoever.

Even RAND, which admits it blindly accepts the Institute of Medicine’s biased pro-vaccine research as “trustworthy,” comes to the conclusion that vaccines cause “serious adverse events.” Not surprisingly, RAND argues that such events are “extremely rare” and are outweighed by the “protective benefits” of vaccines, but that’s not what the public has been told about vaccines. The BIG LIE everyone’s being told is that vaccines harm no one and only provide positive benefits. Thus, the very debate of being able to rationally weigh risks vs. potential benefits is silenced by the vaccine industry and all its obedient propagandists.

What America really needs is an honest, open debate about vaccine risks vs. potential vaccine benefits. We need to discuss vaccine quality control, immunization schedules, and most importantly vaccine ingredients such as mercury (Thimerosal), aluminum and inadvertent contaminants.

Until that debate can be honestly and openly held without the vaccine propagandists immediately proclaiming vaccine skeptics have no right to be heard because “the science is settled,” the vaccine industry has no claim to be based on scientific reality at all. As run today, it is nothing but a “vaccine cult” built on circular logic and hucksterism, not evidence and rationality. Thus, the very idea that vaccine policy is rooted in “science” doesn’t pass even the most basic tests for scientific integrity.

Harmful medical interventions must not be mandated in a free society

Furthermore, the pushing of mandatory vaccination policies (such as California’s SB 277) when vaccines irrefutably cause serious, permanent harm to some children reveals the gross violation of medical ethics and human rights found in the twisted demands of the vaccine propagandists. To mandate a medical intervention that knowingly causes serious damage to some children is to condemn those children to a life of suffering and pain. It is the greatest expression of the coercive force of the medical police state which enforces a genuine “medical tyranny” over the population while simultaneously lying to the public about the risks associated with compliance.

No medical intervention can be ethically mandated when the risk of harm is greater than zero. There is no question whatsoever that vaccines present a greater-than-zero risk of serious, permanent harm to children. The continued requirement that parents expose their children to risky, harmful vaccine interventions — enforced by the coercion of the State — echoes the gross medical ethics violations of the Third Reich’s eugenics science which pushed mandatory euthanasia and sterilization, all enforced essentially at gunpoint.

SB 277 must be repealed, and vaccine choice rights must be reestablished for parents across America.

Stay informed on the ethics and medical science revelations about immunizations at Vaccines.news and Medicine.news.

Here’s a compressed version of Table D from the report, which describes the summary of the associations found: