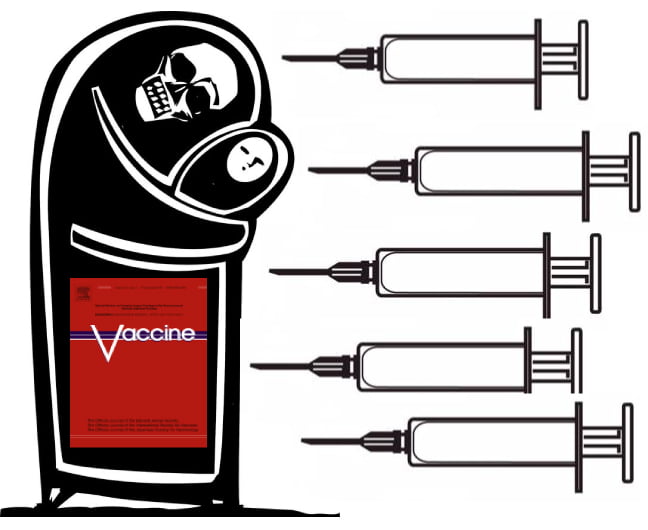 A new study published in the journal Vaccine has brought to light an extremely disturbing though still virtually unreported dark side to immunization campaigns within low-income countries, namely, the observation that infant mortality sometimes increases when the number of co-administered vaccines increases; a finding diametrically opposed to the widely held belief that vaccination is always a life-saving intervention, and that the more vaccines administered to infants the better.

The new observational study from the West African country Guinea-Bissau titled, “Co-administration of live measles and yellow fever vaccines and inactivated pentavalent vaccines is associated with increased mortality compared with measles and yellow fever vaccines only,”[i] opens with a reference to the already consistent observation in the biomedical literature that the co-administration of inactivated diphtheria-tetanus-pertussis (DTP) vaccine and live attenuated measles vaccine (MV) increases mortality compared with receiving MV only. [ii] [iii]

The purpose of the new investigation was to determine whether co-administration of pentavalent vaccine (PV) with MV and yellow fever vaccine (YF) had similar negative effects. Both PV and YF vaccines were introduced in Guinea-Bissau in 2008, with PV containing 5 vaccine antigens in one shot (DTP-H. Influenza type B-Hepatitis B).

The study findings emerged from a randomized, placebo-controlled clinical trial conducted in 2007-2011, where researchers administered vitamin A at routine vaccination contacts among children aged 6-23 months in urban and rural Guinea-Bissau. A total of 2331 children were randomized to placebo, receiving either live vaccines only (MV or MV+YF) or a combination of live and inactivated vaccines (MV+DTP or MV+YF+pentavalent).

“In line with previous studies of DTP, the present results indicate that pentavalent vaccine co-administered with MV and YF is associated with increased mortality.”

This finding takes on a more disturbing light when one considers that by the end of 2013, largely through the efforts of the Global Alliance for Vaccines and Immunisation (GAVI), pentavalent vaccines will have reached close to 200 million children in 72 developing countries. GAVI also states that yellow fever vaccines have been administered to 60 million children, “averting an estimated 160,000 future deaths.” Pentavalent vaccines have already created widespread controversy by being linked to clusters of infant deaths in every Southeast and South Asian country where they have been introduced, including Bhutan, Sri Lanka, Vietnam and India. Similarly, yellow fever vaccines have been linked to deaths as far back as 2001, when 7 people were found contracting yellow fever and dying from the vaccine itself.  The obvious question then emerges: Could both the pentavalent and yellow fever vaccines actually be increasing mortality despite GAVI’s position that they are a life-saving intervention that presumably should be administered to every at risk child in the developing world?

What adds additional weight to this concern is that there is already a well-established history of DTP (and oral polio) vaccines being linked to increased morbidity and mortality in low-income countries, starting with this 2000 BMJ article also in a population of vaccinated infants from Guinea-Bissau that found recipients of one dose of DTP or polio vaccines had higher mortality than children who had received none of these vaccines. A 2011 study of Guinea-Bissau females found DTP vaccine administered simultaneously with measles vaccine is associated with increased morbidity and poor growth in girls.[iv] Clearly the vaccines can cause significant harm. Another far more recent study published this year in the journal Tropical Medicine and International Health found that DTP vaccination is responsible for higher mortality among Indian girls. Another 2005 study on vaccinated female infants in India found that those who receive both the tuberculosis vaccine Bacillus Calmette–Guérin (BCG) and DTP experience significantly higher mortality than those who receive only one of the two vaccines.[v]

Given the multitude of studies showing vaccine-induced harm, including increased infant mortality, especially for DTP vaccines, one wonders how global vaccination campaigns can blatantly promote them as infallibly effective and extremely safe.

Evidence That Vaccines Are Toxic Exposures

It has been hypothesized that this association with DTP vaccines and increased mortality may be due to the Th2-polarising effect of the aluminum phosphate adjuvant in the vaccine, as well as the chronic inflammation caused by the intramuscular administration of the vaccine at the site of injection, [vi] but another obvious explanation is that the vaccines themselves are toxic exposures, with the more vaccines given to infants the higher the likelihood of synergistic toxicity and resultant morbidity and mortality.

Exactly this possibility was raised by a 2011 study published in the journal Human and Experimental Toxicology titled, “Infant mortality rates regressed against number of vaccine doses routinely given: Is there a biochemical or synergistic toxicity?”,[vii] which brought to the fore the fact that, “The infant mortality rate (IMR) is one of the most important indicators of the socio-economic well-being and public health conditions of a country.  The US childhood immunization schedule specifies 26 vaccine doses for infants aged less than 1 year-the most in the world-yet 33 nations have lower IMRs.” The study found that there is a highly statistically significant correlation between increasing number of vaccine doses and increasing infant mortality rates.

With the ongoing expansion of immunization schedules in the U.S. and globally, justified by the idea that more vaccines, and more vaccine antigens combined within each injection, will confer greater overall benefit to health (that far outweigh the risks of the vaccines themselves), and by ‘vaccine safety’ spokespersons such as Paul Offit claiming as many as 10,000 vaccines can be administered to a child at once safely, this new study indicates quite the opposite is true.