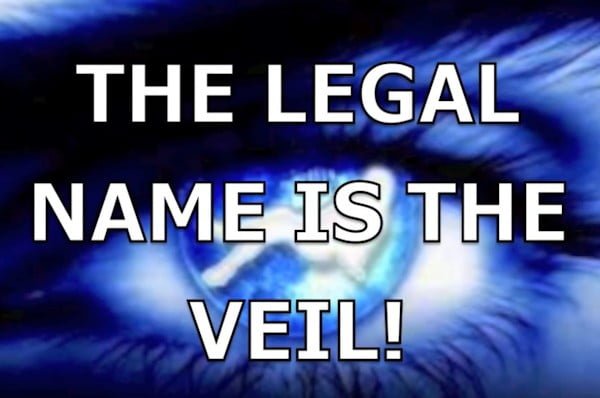 The legal-fiction, fictional entity system is a front for something else. The explanation given is that everyone must denounce the system as criminally deceptive behavior that is actually an ACT OF WAR against humanity.

There are specifics which I did not retain as accurately, however some of this involved writing to one’s senator and specifically revoking the connection and of that fictional entity (legal name) to their living being and proclaiming absolute severance of any and all aspects of that system.

There is something like a time limit then after one provides notice to the issuing authority that the authority (like a credit union) must then respond in a certain number of days or, according to UCC law (commercial law for corporations) that the issuance being filed by the individual is thereby legally sound and confirmed.

There are extensions of this that I (and others) was informed of, such as how the US is a corporation and is bankrupt and sold the souls of humanity in order to pay of it’s debt (to itself, by proxy of the debt makers who took over through the generation of a war and economic machine). That the corporation took out loans in all individuals in the form of their birth certificate and that this is used to wager the repaying of debt generated in that system.

That the people then are formed with a legal-fiction through the birth certificate and that there is no law that says the business of a person cannot legally be held accountable for the debt that they accrued through operation (living) and so when a living man or woman identifies as that legal title then the system has legal authority to then apply all debts, punishments, fines, etc towards that living man or woman.

The system holds that it is ILLEGAL to do this to a living man or woman.

Yet if that man or woman identifies as the legal-fictional entity, (the business account in that person’s ‘name’) then they are automatically assuming responsibility for that fictional-entity and all that is applied to it through such a fictional-legal system.

The “name” is used, not a “title” as if you held your “title” (the actual certificate and the authority of the issuer) then you would have access to all the funds of the account as well as the right to dissolve or change the account.

This following part may be skewered.

Thus, the one who has the “debt”, the “debtor” is responsible for paying back that debt. Since the debt is impossible to pay back (purposely so) it’s an intentionally failed system and thus the only responsibility that person has is to eventually be enslaved when the time comes (this generation or the next) as that system will take in blood what it generated in paper.

Thus, the ‘creditor’ the one who issues the debt is the corporation that produces the whole legal fiction system in the first place (or their wealthy underlings…. who print all value out of thin air and go to war to silence opposition).

As such, when one revokes their use through the application of UCC code 32 whereby they can ‘remedy’ the legal-fiction conundrum by revoking the use of their ‘legal fiction-name’ (not title) and becoming the ‘creditor’ of their account instead of the debtor (i believe that is the correct order of the terms) and they can thereby settle their debt by proclaiming that it never existed (because it never did).

All of this has to be done either through the living man or woman withdrawing from the system to the point where a reasonable group of people would reasonably assume they are not relying on the legal fiction system and the social system for any benefits, or by completely removing the rights to access funds in their legal name by withholding access to the account through legal remedy by applying to a local senator with the proper paper work and ‘legal commands’ changing the title to their account and directly accessing the funds held in their previously active legal-fiction name.

I tend to look at the second part of accessing the millions to billions of dollars in the accounts as potentially deceptive and choose to only align with the information I’ve received in regards to withdrawing from the legal fiction, the legal entity system and securing one’s place as the living man or woman rather than the strawman.

Apparently “God’s Law” is the only law which cannot be overturned by this system.

Maritime Admiralty Law
*****************************
When the Ship pulls into the Berth, the captain must produce a document of manifest to inform the Port Authorities of what Product he is bringing into the country and the economy. This is the law of the Seas, UCC or Uniform Commercial Code is the commercial law that regulates this activity on earth. The captain is being the informer, informing the bankers.

When you were born you come out of your mother’s WATER, you are labeled a maritime admiralty product. Your parents sign a document called a birth (BERTH) certificate, INFORMING the Authorities a product has just been produced. This is all regulated under Commercial law, the law of the seas and NOT the Law of the Land. Your parents are being the informer, informing the bankers.

Your Birth (BERTH) Certificate (CLAIM OF OWNERSHIP) is a Commercial Document Creating the Corporation known as a PERSON, either it be a Private, natural, legal, Juristic or Artificial. This is NOT YOU but a Contract formed between you and the Assumed Corporate entity in which your parents were tricked into Contract With such as USA, Inc.. This Contract stays with you until the day you DIE.