Author of One Guy’s Story:  Nesh

My hope is to tell a light-hearted story about a serious subject–your health.  This  story might inspire you to look into alternative methods of healing, like Frequency Therapy, while respecting the medical establishment. Everyone has to make his or her own health decisions.  And you are the ultimate authority.

I was born into a medical family.  My grandfather was a pioneering doctor in the Pacific Northwest region of the United States.  He made house calls using a horse and buggy and eventually upgraded to a Ford Model A. My father bought his practice and continued making house calls using a much nicer ride. As a kid I would sometimes ride along.  My uncle was an ophthalmologist who lived in the same small town.  My mother kept the house and family together and volunteered for the Red Cross. As a child, my parents for Christmas had me gift my grandfather with a carton of Lucky Strikes cigarettes, his favorite brand.  He eventually died of lung cancer.  At the time, most adults smoked.  They didn’t know any better,  including the doctors.

“Imagine what your life would be like if you could eliminate ill health in as little as one day for something mild (like a common cold), or in six months to a year for more serious illnesses (like cancer)”,  from Nenah Sylver, Phd in The Rife Handbook of Frequency Therapy and Holistic Health, Revised 2011 Edition.

I was imagining all sorts of things when I got the cancer diagnosis after a routine physical examination.  My PSA (prostate specific antigen) score was high but it wasn’t all bad.  The biopsy showed prostate cancer, low to intermediate level and and the MDs told me it was easily treated with radiation or surgery.  It was contained, no need for chemo at this stage.  Insurance covered it. No problem. I had treatment options. Oh, by the way, I was told by the cancer doctors, there could be side effects from the radiation or surgery like tumors from the radiation treatment, erectile dysfunction, incontinence and diarrhea.

I talked to a friend who had the radiation procedure.  It was a success, he is still alive and goes to the bathroom every 30 minutes. I know of two other guys who had the surgery, only to have the cancer return and one later died.  Okay, in fairness, one cousin had the radiation and he has said he is totally happy with no complaints.

Time Is On My Side

Once I calmed down, I knew I had time, unlike my brother in-law who was diagnosed in the same few-month period, with gliosarcoma (brain cancer).  He died less than six months after his diagnosis.  Unlike my ex- wife, who died of ovarian cancer.  She  had access to a brand new Canadian oncology center with the finest Canadian doctors. Unlike my teacher Betty who went in for  colon cancer surgery and died less than one week later from complications from the surgery. Unlike way too many others in my life.

“It’s a scam! “exclaimed my wife’s good friend just before she died from breast cancer referring to the cancer industry and its huge costs for conventional treatment. I could write more about how it’s a scam, but look, everybody knows by now its probably true, so let’s just move on.  I encourage you to do your own research. Find out for yourself. You don’t have to take a dying cancer patient’s word for it.

I did my research.  I got inspired by watching the Ty Bollinger internet series, The Truth about Cancer, I read the Suzanne Somers book,  Knockout: Interview with Doctors who are Curing Cancer, I visited the Edgar Cayce A.R.E. library in Virginia Beach, and I called cancer clinics in the U.S. and Mexico.  I improved my diet.

Eventually I boiled it down to three options for myself:  The Hoxsey Clinic in Tijuana, Mexico, cannabis from WAMM (Women’s Alliance for Medical Marijuana) of Santa Cruz, CA and  “frequency therapy.”  Why these three options?  Answer: affordable, available and effective, from everything I read about them.

Quiet Introductions are Made

Friends told me to go see Janice (pseudonym).  Janice had successfully run a frequency therapy clinic in another city. She had recently moved to my area and was taking on new clients. Janice was all word-of-mouth. She had no website and no conventional publicity.

As it Turns Out, Not Everyone Wants a Cure for Cancer

Dr. Royal Rife was a famous microbiologist in the last century.  He was praised by the establishment for his ground-breaking work with frequencies until he didn’t go along with the AMA (American Medical Association). He was then shut down, raided and discredited.  See the following link a story about Rife and Bob Beck

The Machine…. and the Empire Strikes Back

One day,  Karl was quietly working away in his lab when he casually looked out the window and saw several black SUVs with dark-tinted windows pull up in front.   Men in dark suits and dark glasses, guns drawn,  broke his door down and stormed in.   They efficiently packed up all his research work, his machines, his files and his notes and quickly drove off.

Karl was  stunned but alive.  After lying low for a while, he hired a private detective to look into the matter.  To his amazement, he learned that he now had a completely false, “planted” criminal record to be used against him should he get any ideas about taking legal action. “They” evidently wanted what he had and — they didn’t play nice.

It was a warm and sunny day in late April.  Birds were singing and the mailman was artfully dodging the sprinklers.  I walked into the office of a local chiropractor, and asked for Janice.  “Just down the hall,” said the receptionist. Janice was already with another client when she asked me to take a seat.

Later, I realized how overwhelmed with clients she is — clients who contact her from all over the country.

After filling out forms and taking questions about my condition, Janice began muscle testing me (kinesiology) for fine tuning to determine the correct killing and healing frequencies.  Janice taught me to program the machine.  Soon I was holding a  glass plasma tube in each hand. The tubes glowed orange in my hands, delivering the needed frequencies that would shatter the cancer bugs. 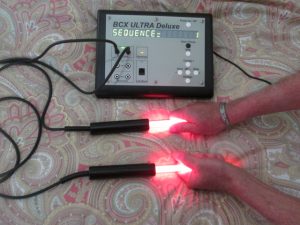 After 12 months of weekly frequency sessions,  my PSA level is back in the normal range and I feel so much better. Friends comment that I look much healthier.  Best of all, I get to keep all of my body parts.  I bought a frequency machine for home use and will continue to work on my health and besides, I want a cure for the common cold.  A happy beginning for sure but there is more to this story.

There will be a Part Three!