Prepare For Change
Home Awakening The Real Unemployment Number: 102 Million Working Age Americans Do Not Have... 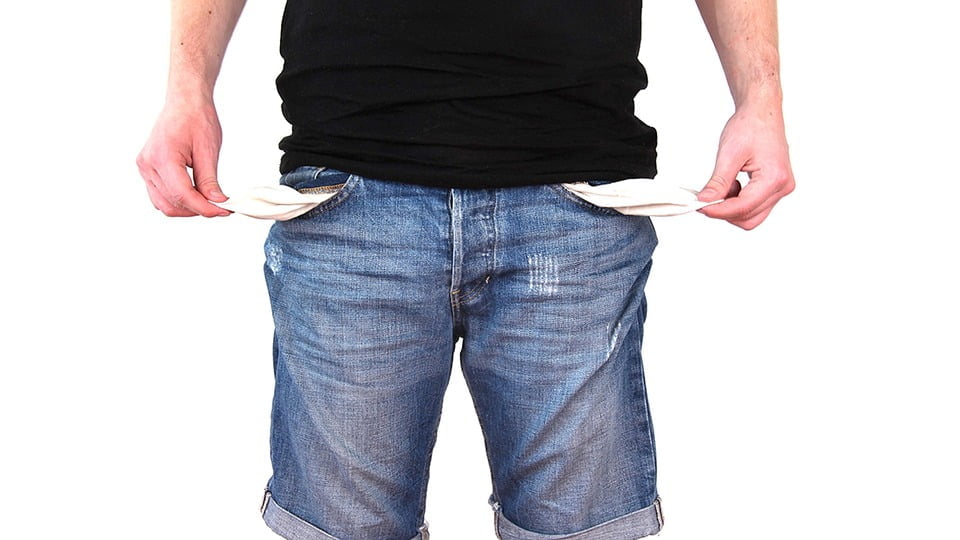 Did you know that the number of working age Americans that do not have a job right now is far higher than it was during the worst moments of the last recession?  For example, in January 2009 92.6 million working age Americans did not have a job, but we just found out that in May the number of working age Americans without a job increased to just a shade under 102 million.  We’ll go over those numbers in more detail in a moment, but first I want to talk a bit about the difference between perception and reality.  According to the bureaucrats in the federal government, the “unemployment rate” in May was the lowest that we have seen in 16 years.  At just “4.3 percent”, we are essentially at “full employment”, and so according to them anyone that really wants a job should be able to find one pretty easily.

Of course that is a load of nonsense.  John Williams of shadowstats.com tracks what our economic numbers would look like if honest numbers were being used, and according to his calculations the unemployment rate is currently 22 percent.

So what accounts for the wide disparity between those numbers?

Well, the truth is that the official “unemployment rate” that the mainstream media endlessly hypes is so manipulated that it has essentially lost all meaning at this point.

In May, we were told that the U.S. economy added 138,000 jobs, but that is not even enough to keep up with population growth.

However, when you look deeper into the numbers some major red flags quickly emerge.  You won’t hear it on the news, but in May the U.S. economy actually lost 367,000 full-time jobs.  That is an absolutely nightmarish figure, and it confirms the fact that economic activity is starting to dramatically slow down.

How in the world can they do that?

Well, for years the government has been taking large numbers of people from the basket known as “officially unemployed” and dumping them into another basket known as “not in the labor force”.  Since those that are “not in the labor force” do not count toward the official unemployment rate, they can make things look better than they actually are by moving people into that category.

In other words, when you round up to the nearest million you get a grand total of 102 million Americans that do not have a job right now.

So if the number of working age Americans without a job has risen by 9.21 million since January 2009, are we really doing so much better than we were during the depths of the last recession?

Another way to look at this is by examining the civilian employment-population ratio.  Just before the last recession, about 63 percent of the working age population had a job, but then during the recession that number fell to between 58 and 59 percent for quite a while.  We have finally gotten back to the 60 percent mark, but we are still far, far below the level that we were at before the last recession struck. 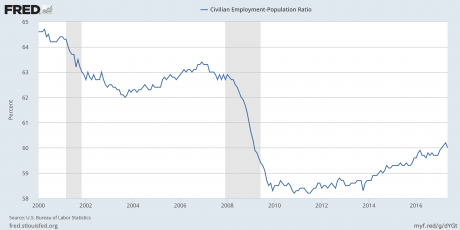 And of course all of the above assumes that the numbers that the government is giving us accurately reflect reality, and that is highly questionable.

For example, according to one recent analysis the “business birth and death model” has accounted for 93 percent of all “new jobs” reported by the government since 2008…

As our friends at Morningside Hill calculate, a full 93% of the new jobs reported since 2008 – 6.3 million out of 6.7 million – and 40% of the jobs in 2016 alone were added through the business birth and death model – a highly controversial model which is not supported by the data. On the contrary, all data on establishment births and deaths point to an ongoing decrease in entrepreneurship.

In essence, government bureaucrats pull a number out of the air and add jobs to the report based on an estimate of how many new businesses they think are being created in America in a particular month.

Is it possible that there is a chance that they are being overly optimistic when they make this estimate?

Most people have no idea that the “official numbers” that we get from the government are highly speculative, and there is always a temptation to make things look better than they actually are.

There is no way in the world that we are anywhere near “full employment”.  I hear from people all over the country that say that it is exceedingly difficult to find good jobs where they live.  And according to a brand new report that was just released, the number of job cuts in May 2017 was 71 percent higher than it was in May 2016.

I don’t see how anyone can possibly claim that the U.S. economy is doing well.  Just prior to the last recession there were 26 million Americans on food stamps, and now we have 44 million.  We are on pace to absolutely shatter the all-time record for store closings in a single year, and the number of homeless people living in Los Angeles County has risen by 23 percent over the past 12 months.

But once again, it is a battle of perception vs. reality.  Their televisions are endlessly feeding them the message that everything is just fine, and most Americans seem to be buying it, at least for now…