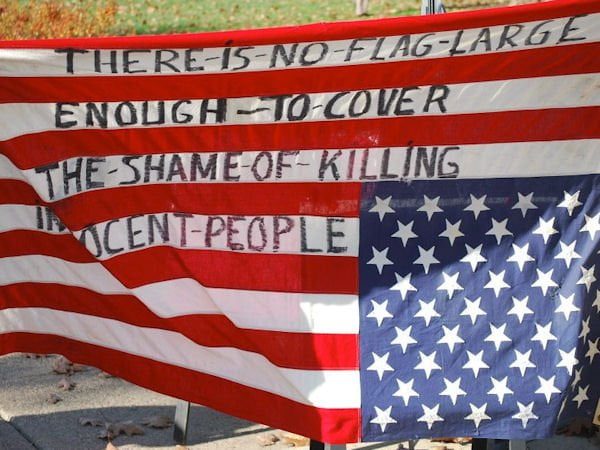 Donald Trump said, “I’m going to make our military so big, so powerful, so strong, that nobody — absolutely nobody — is gonna mess with us.”

Simple-minded but deadly thinking at the top derives from influential groups and individuals who think we have to KILL to keep the rest of the world in line. The compliant mainstream media scares us into accepting wars and drone killings overseas, military-style defenses on our own streets, surveillance of our private lives. For the war-happy leadership of America, certain realities are better left unsaid, or at most reported quickly and quietly.

1. Terrorist Acts in the U.S. Were More Common 40 Years Ago

Terrorist acts are deadly, but the panicky reports of mainstream news sources scare us more than they should, as when a FOX reporter called ISIS “the single biggest threat in [America’s] 200-year history.”

This graphic derived from the Rand Corporation’s terrorism database shows that the frequency of terrorist acts was greatest in the 1970s and 1980s. CNN notes that “There were literally hundreds of terrorist bombings, shootings and hijackings in States during the 1970s.” 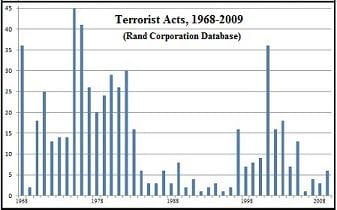 2. Violent Crime Is Down — Except Where Young Men are Left to Languish and Die

The rate of violent crime has been consistently dropping since 1993. Except in places like Chicago, where nearly half of young black men are neither working nor in school.

The New York Times summarizes the effects of constant media scares: “Americans are primed, when they hear a loud bang or screams, or see a crowd break into a run, to think in terms of mass killings and active shooters. Yet crime statistics show that over all, violence in the United States is as low as it has ever been, and experts say the fear far exceeds the risk.”

The solution is JOBS — but Congress has a long record of stifling job creation proposals. They’d rather pull out a gun.

This helps to explain why only about 12 percent of named drone victims in Pakistan were identified as al Qaeda militant targets.

In 2014, 55 U.S. soldiers lost their lives in foreign occupations, but 269 active service members committed suicide. Almost five times as many.

It gets much worse. In that same year of 2014 over 7,400 veterans took their own lives, accounting for an incredible 18 percent of all suicides even though vets make up less than 9 percent of the U.S. population. About 75 percent of the suicides were committed by veterans without VA care.

5. Whistleblowing was Part of the Founding of America

Our nationalist leaders don’t care about any of this. They just want to make sure no one’s “gonna mess with us.” But as more of our misdeeds go unreported, more and more of the world is learning to hate us.

This work first appeared on www.commondreams.org and is licensed under a Creative Commons Attribution-Share Alike 3.0 License.