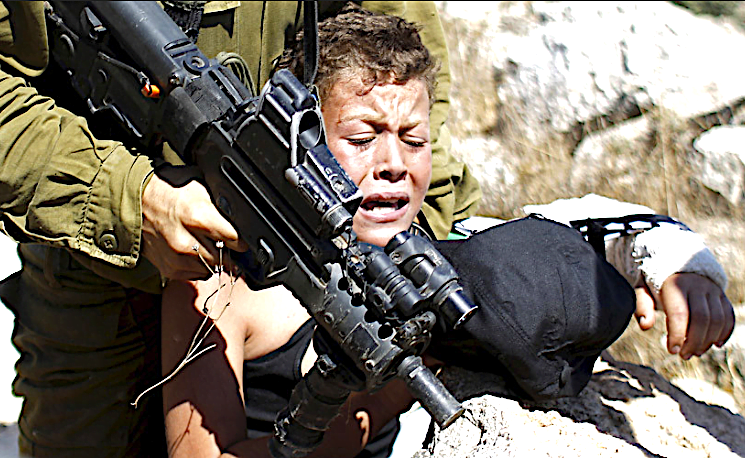 The panic and cruelty plumbed new depths last week, when Israeli officials launched a $2.3 million lawsuit against the family of Fadi Qanbar, who crashed a truck into soldiers in Jerusalem in January, killing four. He was shot dead at the scene.

The suit demands that his widow, Tahani, reimburse the state for the compensation it awarded the soldiers’ families. If she cannot raise the astronomic sum, the debt will pass to her four children, the oldest of whom is currently only seven.

Israel is reported to be preparing many similar cases.

Like other families of Palestinians who commit attacks, the Qanbars are homeless, after Israel sealed their East Jerusalem home with cement. Twelve relatives were also stripped of their residency papers as a prelude to expelling them to the West Bank.

None has done anything wrong – their crime is simply to be related to someone Israel defines as a “terrorist”.

This trend is intensifying. Israel has demanded that the Palestinian Authority stop paying a small monthly stipend to families like the Qanbars, whose breadwinner was killed or jailed. Conviction rates among Palestinians in Israel’s military legal system stand at more than 99 per cent, and hundreds of prisoners are incarcerated without charge.

Israeli legislation is set to seize $280 million – a sum equivalent to the total stipends – from taxes Israel collects on behalf of the Palestinian Authority, potentially bankrupting it.

On Wednesday Israel loyalists will introduce in the US Senate a bill to similarly deny the PA aid unless it stops “funding terror”. Issa Karaka, a Palestinian official, said it would be impossible for the PA to comply: “Almost every other household … is the family of a prisoner or martyr.”

Israel has taken collective punishment – a serious violation of international law – to new extremes, stretching the notion to realms once imaginable only in a dystopian fable like George Orwell’s 1984.

Israel argues that a potential attacker can only be dissuaded by knowing his loved ones will suffer harsh retribution. Or put another way, Israel is prepared to use any means to crush the motivation of Palestinians to resist its brutal, five-decade occupation.

All evidence, however, indicates that when people reach breaking-point, and are willing to die in the fight against their oppressors, they give little thought to the consequences for their families. That was the conclusion of an investigation by the Israeli army more than a decade ago.

In truth, Israel knows its policy is futile. It is not deterring attacks, but instead engaging in complex displacement activity. Ever-more sadistic forms of revenge shore up a collective and historic sense of Jewish victimhood while deflecting Israelis’ attention from the reality that their country is a brutal colonial settler state.

If that verdict seems harsh, consider a newly published study into the effects on operators of using drones to carry out extrajudicial executions, in which civilians are often killed as “collateral damage”.

A US survey found pilots who remotely fly drones soon develop symptoms of post-traumatic stress from inflicting so much death and destruction. The Israeli army replicated the study after its pilots operated drones over Gaza during Israel’s 2014 attack – the ultimate act of collective punishment. Some 500 Palestinian children were killed as the tiny enclave was bombarded for nearly two months.

Doctors were surprised, however, that the pilots showed no signs of depression or anxiety. The researchers speculate that Israeli pilots may feel more justified in their actions, because they are closer to Gaza than US pilots are to Afghanistan, Iraq or Yemen. They are more confident that they are the ones under threat, even as they rain down death unseen on Palestinians.

The determination to maintain this exclusive self-image as the victim leads to outrageous double standards.

Last week the Israeli supreme court backed the refusal by officials to seal up the homes of three Jews who kidnapped Mohammed Abu Khdeir, a 16-year-old from Jerusalem, in 2014 and burnt him alive.

In May the Israeli government revealed that it had denied compensation to six-year-old Ahmed Dawabsheh, the badly scarred, sole survivor of an arson attack by Jewish extremists that killed his entire family two years ago.

Human rights group B’Tselem recently warned that Israel has given itself immunity from paying compensation to all Palestinians under occupation killed or disabled by the Israeli army – even in cases of criminal wrongdoing.

This endless heaping of insult upon injury for Palestinians is possible only because the west has indulged Israel’s wallowing in victimhood so long. It is time to prick this bubble of self-delusion and remind Israel that it, not the Palestinians, is the oppressor.

Jonathan Cook is an award-winning British journalist based in Nazareth, Israel, since 2001. In 2011 Jonathan was awarded the Martha Gellhorn Special Prize for Journalism. The judges’ citation reads: “Jonathan Cook’s work on Palestine and Israel, especially his de-coding of official propaganda and his outstanding analysis of events often obfuscated in the mainstream, has made him one of the reliable truth-tellers in the Middle East.”