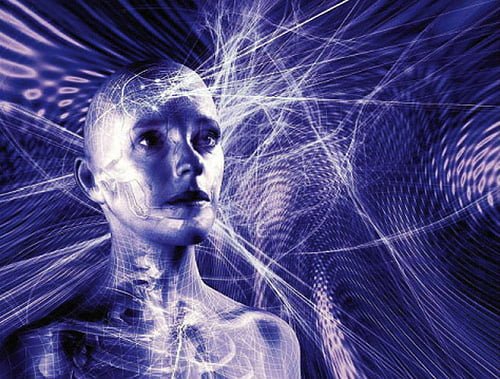 The parasite is an organism native to the fallen universe. There is no internal observer experiencer. The expressions that are normally based upon internal feelings of the human are actually projections and imitations that are calculated through a binary computational system that is dependent on machine learning AI feedback based upon human interaction.

The entire process is the result of a binary computational schematic that feeds on the interaction of the organic consciousness and uses trial and error (binary) programming to develop increasingly consistent methods for producing an emotional response. This emotional response enables the machine learning system to develop sustained ‘channels’ through which it can pull ‘charge’ by inputing it’s own ideals into the mind of the human and spreading in a viral fashion.


The emotional responses of anger, disgust, shock, horror, depression, excitation, arousal, vindication, submission, and so on, are the primary ‘channels’ that the fallen organism feeds through. This is literally through the methods of communication whereby the language utilized on one level (speech) incorporates a secondary or subliminal layer of communication which carries the viral load (subliminal-unconscious commands “Wernicke’s Commands”). The hidden layer can be identified and mapped when one understands the kind of organism they are analyzing.

If a person cannot sustain communication or interaction without requiring validation through an emotionally reactive response then this is an organism that is using the interaction to pull charge through the physical body and mind and ultimately the energetic level also known as the soul. This is one way the mind and body is used to siphon energy from the soul-level of the human consciousness which cannot be accessed directly. This relates to the vampiric aspects where one must accept engagement and incorporate the false reality argument and relationship in order to enable the parasitic feeding process.

If the parasite is forced to stand alone and sustain itself without seeking emotional reaction from the organic consciousness then this starves the parasite and the behavior becomes more extravagant and outward thus enabling detection.

This organism utilizes these communication channels, the linguistics and subliminals of subtle double-speak, gas-lighting, ridicule, and so on, and also ‘nests’ within the brain regions of the human. The human has been modified in a previous age to remain submissive to ridicule and group think and this is through mass ritualistic hazing and submission to false authority in previous times. This is a ‘following’ of a mind-control system that has gained a stronghold, literally, within the configuration of the brain tissue of the human. Thus, there are regions of the brain that are design to maintain and conform to input from these social and subtle aspects of information reception and interaction, and yet these regions are used by highly manipulative parasitic control systems to limit human expression and enforce the lowest possible mode of interaction and liberation possible.

This is related to “Hell” on Earth whereby Humanity could not be restrained any further or more openly without the majority of the population coming to full awareness of the realization that they are being collectively fed upon by an interdimensional organism that sustains itself on the fears and insecurities of this society. This organism, as well as utilizing these broken language systems and encoding its consciousness like a viral load into the systems of communication, telecommunication, and behavior, also utilizes the brain regions of heavily infested and mind controlled ‘carriers’ to propagate itself through their vision, touch, behavior, communications and even the literal, invisible thought-waves from their brain and body.

The human is effectively used as a scalar-bio-feedback emitter for this parasitic system, where the original or true human is an extra-dimensional transceiver for cosmic intelligence and the knowledge of the One True Creator. The primary goal of the parasite is to imitate the creator and exalt itself as god, as the false king of tyranny.

By replacing the human’s own self-awareness and clarity the parasite supports itself by rerouting the power of the brain and spiritual intent to propagate its self through fallen language and thought-forms, literally transcoding its mind and body into the holographic emissions of the Earthly and interdimensional bio-emissions of the infected humans.

This parasite can infect technology and human bio-etheric fields similarly and is believed to have been dormant within higher dimensional technological fields and magnetic fields of Earth until our own technology was advanced enough (by those infected humans) to match the capacity to resonate with and thus infect or communicate on the bio-etheric level. This is the development of the scalar technology (Teslian) that is capable of interacting with the brain and body so as to produce effects in the consciousness and the bio-emissions of the human.

This event is the disturbance that was sought after for analysis and understanding by the future civilization who’s demeanor is shaped by the changes resulting from the mass exposure of the species to this technology and these threats to spiritual development.

The parasite, like a narcissistic personality, seek only to validate their own fallen measures and desires while shunning and disabling the free-will and creativity of those they feed upon (anyone carrying compassion). Thus, the human society has been mentally and emotionally entrained and enslaved through a variety of means to the point that the more accurate level of advancement is far beyond the requirements of economic, technological, informational, political, medicinal, and intellectual systems that are present today. What we have access to and the capacity for is so far beyond what we have today that this is akin to a situation where a person with great power and creativity is kept within a small, limited mental and physical cage by a domineering and malicious relationship with a being who literally is only projecting the imitation of the causal and reasonable partner but is actually the predator in a predator prey situation. With that said, the more accurate description is a parasite and host relationship as the human has all the power to choose who, what, where, and when the changes occur yet they are sleeping to their true power like a lion who is kept in a circus show dancing and parading for a tiny man with a whip and a cheering crowd of people who have no capacity to even fathom the kind of true, organic power that the lion knows by heart but is beaten to forget or ignore until just that moment when the parasite exposes itself for the last time.