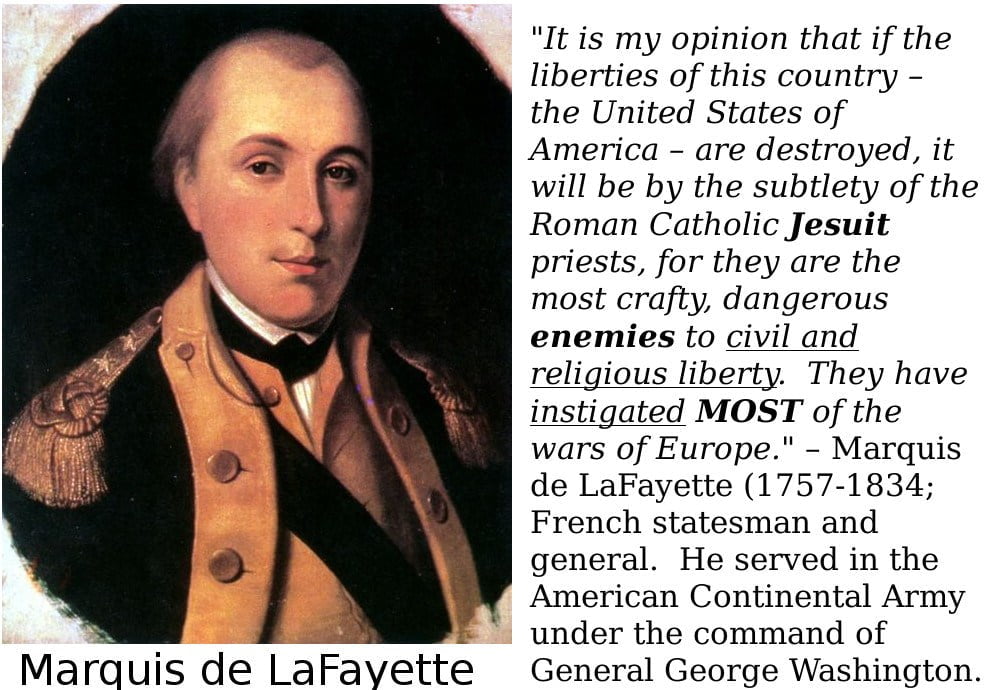 From my research and materials people have been sending me, I have been thinking more and more that all roads indeed do lead to Rome, and specifically to the Vatican! Can you think of any State that has had such sway of the minds of so many for such a long history as the Holy Roman Empire had, and continues to have to this day? Their temporal power only appears to be broken. This is merely my opinion, of course, but I think the quotes below speak for themselves. Did these men really say them? If they did, I think they carry some weight. If they didn’t say them, prove it to me and I shall remove them from my blog.

I found these quotes on http://letsrollforums.com/jesuit-quotes-citations-t14412.html and http://v666.wordpress.com/2007/02/21/quotes-concerning-jesuits-which-all-should-read/ And from http://calltodecision.com/qct.htm I took only the ones of whom I consider to be authoritative figures from history. 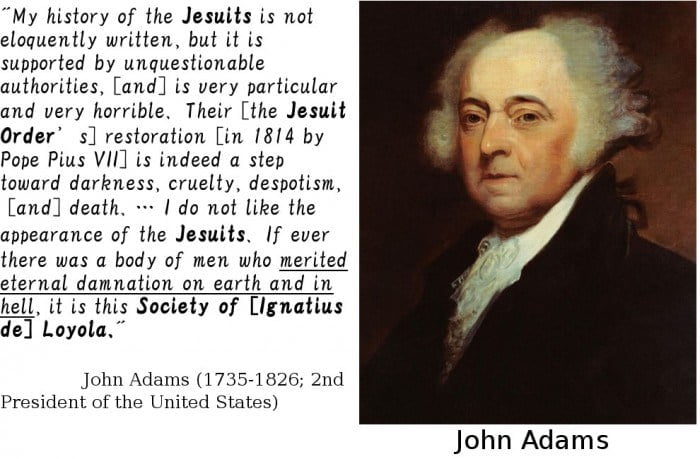 “My history of the Jesuits is not eloquently written, but it is supported by unquestionable authorities, [and] is very particular and very horrible. Their [the Jesuit Order’s] restoration [in 1814 by Pope Pius VII] is indeed a step toward darkness, cruelty, despotism, [and] death. … I do not like the appearance of the Jesuits. If ever there was a body of men who merited eternal damnation on earth and in hell, it is this Society of [Ignatius de] Loyola.”
John Adams (1735-1826; 2nd President of the United States)

“Between 1555 and 1931 the Society of Jesus [i.e., the Jesuit Order] was expelled from at least 83 countries, city states and cities, for engaging in political intrigue and subversion plots against the welfare of the State, according to the records of a Jesuit priest of repute [Thomas J. Campbell]. …Practically every instance of expulsion was for political intrigue, political infiltration, political subversion, and inciting to political insurrection.” (1987)

This [American Civil] war [of 1861-1865] would never have been possible without the sinister influence of the Jesuits. We owe it to popery that we now see our land reddened with the blood of her noblest sons. Though there were great differences of opinion between the South and the North on the question of slavery, neither Jeff Davis [President of the Confederacy] nor anyone of the leading men of the Confederacy would have dared to attack the North, had they not relied on the promises of the Jesuits, that under the mask of Democracy, the money and arms of the Roman Catholic, even the arms of France, were at their disposal if they would attack us. I pity the priests, the bishops and monks of Rome in the United States, when the people realize that they are, in great part, responsible for the tears and the blood shed in this war. I conceal what I know on that subject from the knowledge of the nation, for if the people knew the whole truth, this war would turn into a religious war, and it would at once take a tenfold more savage and bloody character. It would become merciless as all religious wars are. It would become a war of extermination on both sides.”
— Abraham Lincoln (1809-1865; 16th President of the United States)

“The Jesuits…are a secret society – a sort of Masonic order – with superadded features of revolting odiousness, and a thousand times more dangerous.”
— Samuel Morse (1791-1872; American inventor of the telegraph; author of the book Foreign Conspiracy Against the Liberties of the United States)

“The Jesuits are a MILITARY organization, not a religious order. Their chief is a general of an army, not the mere father abbot of a monastery. And the aim of this organization is power – power in its most despotic exercise – absolute power, universal power, power to control the world by the volition of a single man [i.e., the Black Pope, the Superior General of the Jesuits]. Jesuitism is the most absolute of despotisms [sic] – and at the same time the greatest and most enormous of abuses.”–Napoleon Bonaparte; 1769-1821

The Jesuits…are simply the Romish army for the earthly sovereignty of the world in the future, with the Pontiff of Rome for emperor…that’s their ideal. …It is simple lust of power, of filthy earthly gain, of domination – something like a universal serfdom with them [i.e., the Jesuits] as masters – that’s all they stand for. They don’t even believe in God perhaps.”
—Fyodor Dostoyevsky (1821-1881; Russian novelist)

The organization of the [Roman Catholic] Hierarchy is a complete military despotism, of which the Pope is the ostensible [i.e., apparent; seeming] head; but of which, the Black Pope [Ed. Note: The Superior General of the Jesuits], is the real head. The Black Pope is the head of the order of the Jesuits, and is called a General [i.e., the Superior General]. He not only has command of his own order, but [also] directs and controls the general policy of the [Roman Catholic] Church. He [the Black Pope] is the power behind the throne, and is the real potential head of the Hierarchy. The whole machine is under the strictest rules of military discipline. The whole thought and will of this machine, to plan, propose and execute, is found in its head. There is no independence of thought, or of action, in its subordinate parts. Implicit and unquestioning obedience to the orders of superiors in authority, is the sworn duty of the priesthood of every grade…”
— Brigadier General Thomas M. Harris He wrote the book, “Rome’s responsibility for the assassination of Abraham Lincoln” – which exposes the work of the Jesuits

“The presence of the Jesuits in any country, Romanist [i.e., Catholic] or Protestant, is likely to breed social disturbance.”--Lord Palmerston, a British statesman who served twice as Prime Minister of the United Kingdom in the mid-19th century.