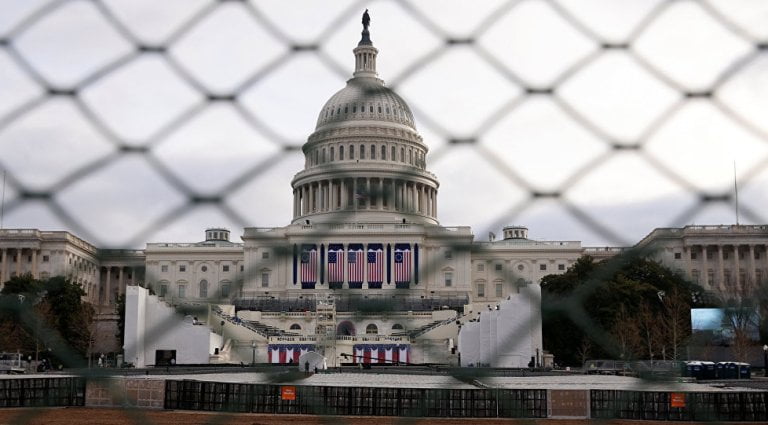 Except for Kiev’s madman, no one wants to play with the United States anymore. Japan and South Korea, of course, have no other recourse but to accommodate the outgoing superpower for their own sake as well, or that of the corporate gangsters which have been put in charge of the industry by Western puppetmasters.

But elsewhere in the Middle East where the root of the petrodollar emanates, another organic realignment is ongoing.

The leader of the Islamic Revolution Ayatollah Seyyed Ali Khamenei has called on neighboring Iraq to remain vigilant in the face of American plots, warning that the US is not trustworthy.

In a Thursday meeting with Iraqi Prime Minister Haider al-Abadi in Tehran, the Leader expressed Iran’s support for the Iraqi government’s efforts to develop ties with regional states.

Ayatollah Khamenei, however, advised the Iraqi nation to remain “cautious about the Americans’ deceptions, and never put trust in them.”

“The Americans created Daesh [Takfiri terrorists] themselves, but now that the terrorists have been defeated by the Iraqi government and people, they pretend to be supportive of this important development,” the Leader said.

“However, they will undoubtedly not hesitate to harm Iraq again if they find the opportunity,” the Leader added.

Ayatollah Khamenei underlined the importance of unity among different Iraqi ethnic groups as well as Baghdad’s support for the country’s popular forces as the key reasons behind the recent victories against terrorist groups and their sponsors.

Abadi, for his part, stressed Baghdad’s determination to safeguard Iraq’s unity and territorial integrity, noting that the government will never allow the country to be threatened with disintegration.

The Iranian warning does have a strong bases even in recent times.

Washington is pouring gasoline on the fire of disputes in the East and South China Seas between Beijing and its neighbors to curb China’s rise and undermine its efforts to resolve the issues peacefully, analysts told Sputnik. Given the growing tensions, Beijing sees the modernization of the country’s defenses as one of its top priorities.

The United States continues their efforts to contain China’s activities in the East and South China Seas by weaponizing the ongoing maritime dispute between the Southeast Asian nations, Shen Shishun, director of the Center for South Pacific Studies of the Chinese Institute of International Studies, told Sputnik, suggesting that Washington’s maneuvers will only bolster patriotic sentiment among the Chinese.

“The US is trying to curb China, relying on third countries,” Shen told Sputnik China. “There is a conflict between China and Japan over islands in the East China Sea, but it is precisely because of the US that this problem emerged.”

According to the Chinese academic, the Diaoyudao (Senkaku) Islands, which “historically belonged to Beijing,” ended up in the hands of Japan due to Washington’s post-WW2 foreign strategy.

Over the past few centuries the archipelago has repeatedly changed hands. The Okinawa Reversion Agreement of 1971 between Tokyo and Washington recognized Japan’s sovereignty over the islands.

“The United States deliberately misinterprets historical facts related to this matter, uses the situation around the islands to increase tension in Sino-Japanese relations and exploits the contradictions between China and its neighbors to curb [Beijing],” Shen said, adding that the US strategy is futile.

Dmitry Mosyakov, director of the Center for Southeast Asia, Australia and Oceania at the Institute of Oriental Studies, believes that the anti-China sentiment promoted by Washington and Tokyo could set relations between the US-Japanese alliance and China back decades.

According to Mosyakov, Washington and Tokyo are not seeking compromise on the Diaoyudao (Senkaku) territorial dispute, but, on the contrary, are fanning the flames over the archipelago.

On Monday US Secretary of Defense Jim Mattis met with his counterparts from Japan and South Korea on the sidelines of the Association of Southeast Asian Nations’ (ASEAN) Defense Ministerial Meeting-Plus (ADMM-Plus) in the Philippines to discuss “deepening security cooperation.” A Department of Defense (DoD) press release said that “the three ministers reaffirmed that freedom of navigation and overflight must be ensured.”

ADMM-Plus is an annual meeting that brings together the defense ministers of 10 ASEAN countries and eight “dialogue partners,” which include India, China, Japan, Australia, New Zealand, South Korea, Russia and the United States.

Mattis also held bilateral talks with Japanese Defense Minister Itsunori Onodera. The two “expressed serious concern about the situation in the South China Sea and reaffirmed their opposition to unilateral coercive actions by claimants, including the reclamation and militarization of disputed features, which alter the status quo and increase tensions,” in a clear reference to China.

Speaking to Sputnik, Mosyakov highlighted that the Sino-Philippine relationship appears to be a viable alternative to the US-Japanese strategy: Beijing and Manila have managed to reach some compromises in the South China Sea. For instance, Philippine fishermen are allowed to fish in the area of Huangyan (Scarborough) shoal.

“China’s relations with the Philippines show that… the discussion of existing problems between the two countries on a bilateral basis brings success,” the Russian academic stressed.

During the ASEAN ADMM-Plus summit Chinese Minister of Defense Chiang Wanquan emphasized Beijing’s intention to work closely with the association to build a safer Asia. He signaled that China is willing to actively develop relations with ASEAN countries in many areas, including joint naval exercises and cooperation to combat terrorism.

At the same time Beijing opposes the involvement of external forces in its territorial disputes with neighboring states. This stance was voiced by Fu Ying, chairperson of the Foreign Affairs Committee of the National People’s Congress of China, at the recent annual meeting of the International Valdai Discussion Club.

She confirmed China’s readiness to continue negotiations on the islands, but spoke out against turning the disputes into an unnecessary geopolitical confrontation. She stressed that the interference of other countries, primarily the United States, in China’s relations with neighbors may only escalate tensions in the region.

Meanwhile, the 19th National Congress of the Communist Party of China (CPC), which took place in Beijing on October 18-24, 2017, also addressed the issue of regional security. The congress’s resolution envisages the modernization of the nation’s defense as one of its top priorities. It also emphasizes the need to transform the People’s Liberation Army (PLA) into a world-class armed force.

The resolution’s emphasis on “the need to implement a military-strategic course with a focus on new conditions” is largely regarded as a message to Japan, which is steadily drifting away from its post-WW2 policy of pacifism under Prime Minister Shinzo Abe.

According to the South China Morning Post, the PLA Navy’s South Sea Fleet has recently deployed a squadron of submarines to the disputed waters of the South China Sea to increase battle readiness.

Beijing’s actions in the region prompt concerns among its ASEAN neighbors. Earlier, in March 2017, reports emerged claiming that China could have been involved in the militarization of its artificial islands in the South China Sea. In response, Chinese Defense Ministry spokesman Wu Qian admitted that Beijing had engaged in a large construction endeavor in the region, but said “most of the building is for civilian purposes.”

Satellite imagery released in March 2017 depicted the buildup of a military installation on a northern island of the Paracels. According to Taiwanese media sources, the construction looked like “preparation for a harbor.” They assumed that China may be seeking to bolster its naval presence in the maritime area. The Paracels are claimed by a number of countries, including China, Taiwan and Vietnam.

Indeed, the bully is on its death throes. Yet all is not lost, even when glory is gone…

“Though nothing can bring back the hour
Of splendor in the grass, of glory in the flower;
We will grieve not, rather find
Strength in what remains behind;
In the primal sympathy
Which having been must ever be…”