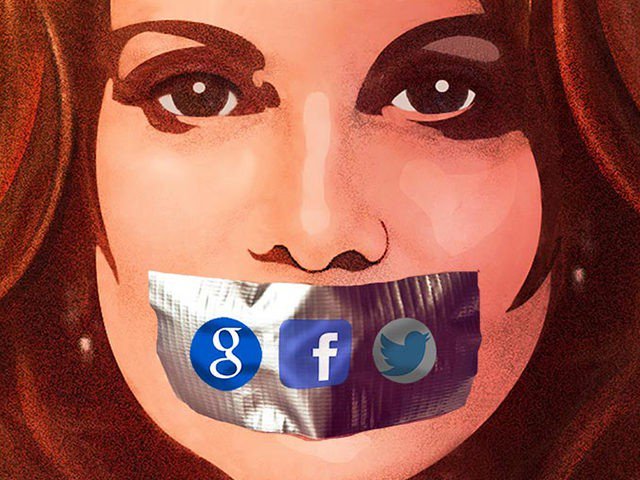 The First Amendment of the United States Constitution declares, “Congress shall make no law respecting an establishment of religion, or prohibiting the free exercise thereof; or abridging the freedom of speech, or of the press; or the right of the people peaceably to assemble, and to petition the Government for a redress of grievances.”

With that being said, exactly what is happening to this right for the freedom of speech? It seems everywhere we turn someone or something is being censored, particularly when it is something that questions what the mainstream would like us to believe. Is this fair?

“The problem of fake news isn’t solved by hoping for a referee, but rather because we as citizens, we as users of these services, help each other. We talk and we share and we point out what is fake. We point out what is true. The answer to bad speech is not censorship, the answer to bad speech is more speech. We have to exercise and spread the idea that critical thinking matters, now more than ever, given the fact that lies seem to be getting more popular.”

Ever since Donald Trump’s election, it seems as though major companies such as Facebook, YouTube and Google have begun tightening up their grip on what sort of content they allow. Perhaps this has to do with the fact that Mr. Trump ended up winning the election, despite the mainstream media’s ongoing efforts to vilify, mock, and tear him down. Is the mainstream media really losing its power? It’s possible, and this would make a really good case for the censorship we are seeing today.

Now, this really has nothing to do with Trump, but this does provide a good example for the message I’m trying to get across. It does, however, have to do with the fact that somehow this apparent horrible monster of a guy ended up winning because people were seeing enough alternative information, none of which was supplied by the mainstream about how the alternate candidate wasn’t as squeaky clean as everyone thought, or as the mainstream made her out to be. So, despite the mainstreams attempts, the wrong person won, which might mean that this power is diminishing, slowly, but surely. Hence the need for censorship, but is this right? The people who did not want Trump to win might think it is, but everyone is entitled to their own opinion, aren’t they?

Some recent examples of this include a viral video merely questioning the integrity of the mainstream news reports of the Florida School Shooting that made it to the top of YouTube’s Trending, within a matter of 3 hours of being uploaded. It was then taken down, and YouTube issued a formal apology for having allowed that to happen. Regardless of the content in the video, my question is, are we not allowed to have an alternative perspective or point of view from the mainstream or question it’s integrity? Shouldn’t the people be allowed to decide for themselves? If the video is so false, and so out there, wouldn’t it speak for itself? Wouldn’t the people be able to tell and dismiss it on their own?

Popular alternative news website, Infowars, had their YouTube account terminated for posting a video that merely questioned the recent Florida shooting. This is the exact definition of censorship.

Google has now eliminated the popular natural health website, NaturalNews.com from its search results. Maybe this site does have some stuff that is a little far out, doubtful or even not always factual, but again can’t we, as the readers, decide this for ourselves? Let the content speak for itself. On one hand we have to give the people more credit, but on the other hand, we are bombarded with so much information these days that many people only read headlines and then make up their minds as to whether or not they want to believe it.

So, unfortunately most people are too lazy, or maybe too busy, or maybe just distracted with too much information to actually look into the information presented, use their own discernment, check the sources, and decide whether or not the story holds any merit or not. Before making an opinion about anything, shouldn’t we all be doing that?

Personally, I can’t count the number of times I have seen my friends, fellow truth tellers and activists go to Facebook jail for posting something that does not meet the standards for Facebook criteria. Yes, this is again often information that is questioning the mainstreams perspective on large events that are taking place around the world. This is the definition of censorship, and quite frankly this is not okay. You know, as I’m typing this I realize that this alone should make us question why “they” are trying so hard to cover this information up in the first place, I realize that in my perspective it actually makes it more credible.

Collective Evolution had their Reddit account permanently deleted after using our network to up vote a comment to get it featured an AMA (Ask Me Anything) in order to ask a question to NASA about disclosing some information regarding alien life, here’s what we asked,

“Collective Evolution Media asks: When is NASA going to reveal what is known about ET life? Former defence minister of Canada Hon. Paul Hellyer has said there are at least 4 known ET species communicating with humans. He is certainly not the only high ranking whistleblower on this topic. When is NASA going to address this? Thanks!”

An innocent question, that got us banned? Why? Maybe just don’t answer it, but why ban us? You can read more about that here. 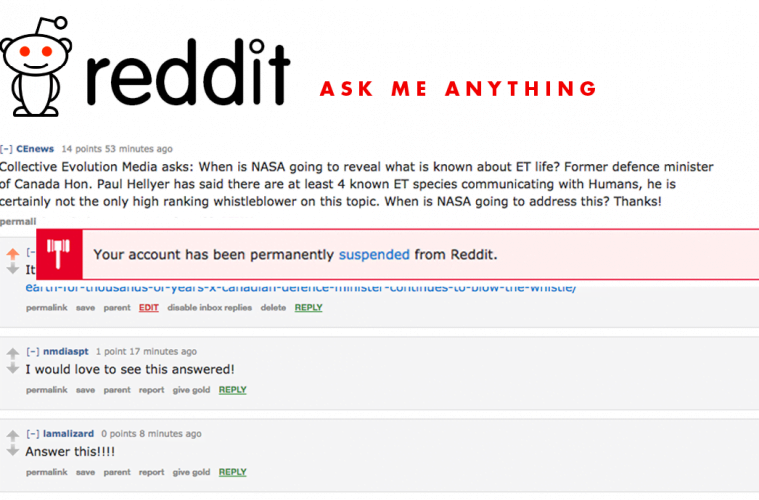 Be Aware Of Your Own Cognitive Dissonance

For example, when people smoke (behaviour) and they know that smoking causes cancer (cognition).

Festinger’s (1957) cognitive dissonance theory suggests that we have an inner drive to hold all our attitudes and beliefs in harmony and avoid disharmony (or dissonance). This is known as the principle of cognitive consistency.

What Can We Do?

This is somewhat of a difficult question to answer because these social media platforms have become such integral aspects of many of our lives. Of course a protest, or a boycott would definitely raise some attention, imagine even 1 million people not signing on to Facebook for 1 week? It may come to the point where something like this needs to happen, in order to show that this is important to us. Unfortunately, this platform has become a place for ridicule, judgment, and anger and many people are afraid to really speak their truth out of fear of opposition.

It is important to “Speak the truth even if your voice shakes.” The more people offering an alternative perspective, the more likely those who are conditioned by the mainstream will at least have a look at it, but it’s important to not share anything unless you yourself have looked into it and can legitimize it in some way, otherwise you are just perpetuating the popular “fake news” label.

DO YOUR RESEARCH. Not everything that goes against the mainstream is true, and there is a lot of B.S. information out there and actual fake news sites that exist.

Listen to a CE Podcast regarding “The Rise Of Fake News.”

Use an alternative search engine. By now, it has become obvious that Google filters their search results, if you want an unbiased list of results from the whole internet consider using any of these instead, DuckDuckGO.com, Qwant.com, StartPage.com or a few more that can be found here.

Always question what the mainstream media is telling you. I don’t care how “conspiracy crackpot” that sounds. There is almost always more to the story than what you are being told, and often there are many holes in the story that are being presented. Pay attention to this, and until you’ve looked into it, don’t judge others who are offering an alternative perspective, chances are they have looked into it. It’s important to keep our emotions aside, and consider the facts. Don’t get engaged in an argument with someone on social media who is merely offering a different perspective until you have  looked into and considered the alternative.

Don’t forget, if something is being censored, there is a reason for it. Think about this one, think long and hard, would there be so much vested interest in hiding something just so you won’t be exposed to it? Really? Or is the other reason more believable?

In this age of information, it is up to us to do our research, consider the facts and not take anything at face value.