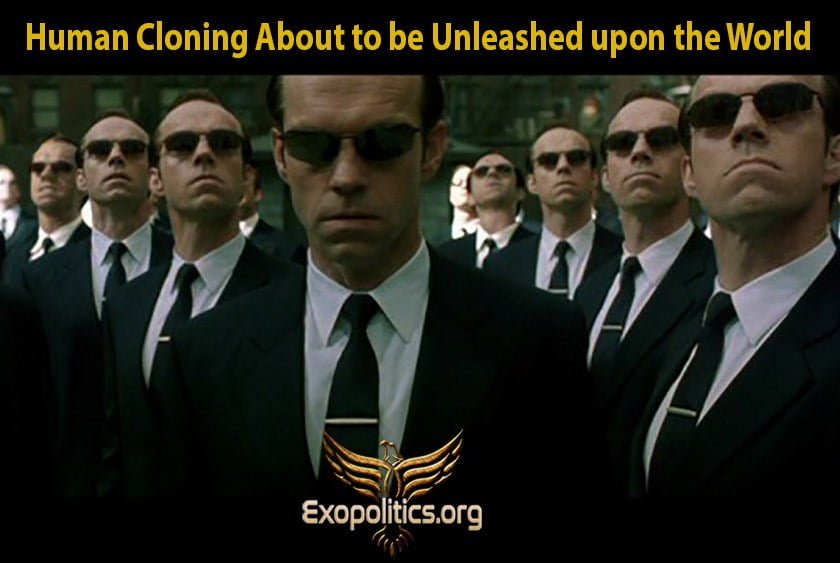 A February 28 report by the New York Times describes how Barbara Streisand paid $50,000 to have two clones made of her favorite pet dog that passed away last year. The story reveals how open source cloning has been quietly developed in scientific laboratories over the last 20 years, and is opening the door to human cloning becoming a reality in the near future. This is not a surprise given multiple whistleblower claims that human cloning was developed by the 1970’s in highly classified military projects.

The New York Times describes how cloning has evolved since “Dolly the Sheep” who was born in 1996. The New York Times tracks how research shifted over years to clone “about two dozen other mammal species, including cattle, deer, horses, rabbits, cats, rats — and yes, dogs.”

The first dog was cloned in 2005 by South Korean researchers at Sooam Biotech. This was followed in 2008 by a California company partnering with the South Koreans which successfully cloned three puppies from a group of five dogs. By 2015, Sooam Biotech, had cloned over 600 dogs according to reports from Business Insider and NPR.

The lead Korean scientist behind the cloning is Hwang Woo Suk, who became infamous for fraudulently claiming he had cloned human embryos in 2004. Despite his fall from scientific grace, no one is doubting that he is successfully cloning dogs.

NPR reports that the cloning process is successful in about one in three attempts, and raises many ethical concerns about the number of miscarriages and the sickly pups that are eventually born.

This did not deter Streisand who used either Sooam Biotech or another Texas based company, her publicist did not reply to the New York Times about which one cloned her dog.

The New York Times summarized an interview Streisand gave with Variety Magazine about her two cloned puppies, which suggested she was satisfied with the results:

In her interview with Variety, Ms. Streisand revealed that two of her three Coton de Tulear dogs were clones. Specifically, the magazine reported that the dogs — Miss Violet and Miss Scarlett — had been cloned from cells taken from the mouth and stomach of Ms. Streisand’s late dog Samantha, who was 14 when she died last year.

Miss Violet and Miss Scarlett “have different personalities,” Ms. Streisand told Variety. “I’m waiting for them to get older so I can see if they have her brown eyes and her seriousness.”

The fact that over 600 dogs have been cloned so far by a Korean researcher made infamous for claims about cloning humans, suggests it is only a matter of time before human cloning becomes a reality.

However, according to a number of whistleblowers, cloning has been occurring since at least the 1970’s. Dr Peter Beter was appointed by President John F. Kennedy to serve as General Counsel for the Export-Import Bank of the United States, a position he held from 1961 to 1967. In an audioletter dated May 28, 1979, Dr. Beter said:

Clones of all kinds of animals have been produced successfully in the laboratory, but that is not what bothers people. In the recent past it has been claimed that human clones are also possible and that some may already be in existence. These last claims about human clones have been ridiculed, denied, and suppressed by all kinds of officials–the reason is that the idea of duplicate human beings impinges upon a super-secret realm of Intelligence activities by both Russia and the United States.

It’s noteworthy to point out that animal cloning according to Dr. Beter was occurring at least 20 years before Dolly the Sheep in highly classified research projects.

It is the claims of Michael Wolf that are next worth considering since he says he was involved in the creation of the first human clone in a classified research facility. Chris Stonor wrote an article summarizing an interview with Wolf in October 2000:

He was involved in various genetic experiments – one being the Sentinel Project. After perfecting cloning techniques on animals Dr Wolf and his associates successfully created an artificially-intelligent human named ‘J-Type Omega’ – their superiors wanted a superbright, superpowerful soldier who would follow orders without fear or question. But Dr Wolf surreptitiously programmed ethics into its intelligence after realizing that ‘J Type’ had a soul.…

The Sentinel Project involved a close association with the ‘Greys’. The ETs vast knowledge on genetics being essential for its success. ‘J Omega’ was grown in a water tank from an embryo. Part of the DNA used came from Dr Wolf. It took exactly one year before he was ready to be ‘awoken’.

In Wolf’s 1993 book, The Catchers of Heaven: A Trilogy, he explained how he was instructed to terminate the clone since it refused to follow an order by his military superiors to kill a dog:

Of course, man has always wanted to create a being in his own image… We can do it now. We have done it! He was terminated, however, because he couldn’t follow orders; he couldn’t shoot an animal. This being told the big brass that I said: “People do not do things unless there’s a good reason to do it. I see no good reason to kill this harmless dog. (The Catchers of Heaven, p. 9)

Wolf asserted that from 1972 to 1977 he worked on highly classified at the S-4 facility at Papoose lake, and Area 51 more generally. It was during this period that the J Omega human clone was allegedly created.

Other more recent whistleblowers who have come forward to claim that human cloning has been around for decades in classified projects include William Tompkins, Corey Goode  and Emery Smith.

It is generally accepted that classified research projects are typically two or three decades ahead of their open sources equivalents. Therefore, the revelations of Beter, Wolf, Tompkins, Goode and Smith concerning the existence of human cloning experiments going as far back as the 1970’s, if not earlier, have just been scientifically vindicated by the New York Times story.

The fact that animal cloning is now available for those willing to pay $50,000 for former pets, raises the likelihood than in the very near future, people will be asked to pay similar or higher fees for clones of former relatives, persons of interest, or even themselves. It’s very likely that the New York Times story on Streisand is preparing the general public for human cloning as a future commercial enterprise, despite the many ethical issues it raises.