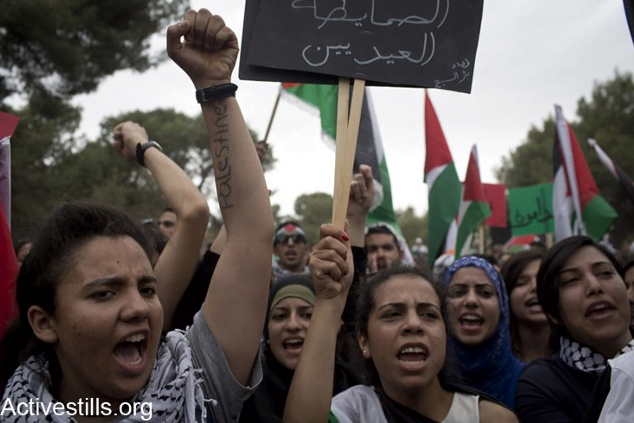 : Thousands of displaced Palestinians in Israel march to the site of the northern village of Lubya on Nakba Day, which Israel celebrates as “Interdependence Day” (Source: Activestills.org)

Israel’s official mantra to explain and defend its crimes against Palestinians, including massacres, has always been, and continues to be, “security”.

For Israel, the word “security” means the security to exist as a Zionist Jewish state on part or all of historic Palestine — to exist as a state meant to be populated by as many Jews from around the world as it could entice to immigrate there, on land and property acquired by a combination of force, subterfuge and purchase from their rightful owners, all of which to be dedicated to Jews “in perpetuity”.

To achieve such “security”, Jewish Zionist forces had first to depopulate historic Palestine of its indigenous non-Jewish Arab population. That happened early on when an estimated two-thirds of non-Jewish Arab Palestinians were ethnic-cleansed, their villages erased from the face of the earth.

These villages keep popping up eerily from under the rubble and trees the Jewish National Fund planted to hide them — a village cemetery here, a line of cactus marking the edges of ruins there.

Many of these Palestinian Arabs are displaced to this day within Israel itself (some, like Palestinian Bedouins live in “unrecognized” villages).

They can see and touch their village lands or property — as those do, for example, who are displaced in Jerusalem and look over the standing ruins of Lifta, my own paternal grandparents’ village.

Or they live in Haifa, gazing at a salvaged structure like my maternal grandparents’ family guest house (al-Madi family) one of the very few structures not destroyed by Israel in Ijzim, now a hotel in Jewish hands advertised as:

“Apartment «the Castle»
The Castle dates back to the 11th-century crusades, and is located 7 km from Hof Habonim Beach, and a 20-minute drive from both Cesarea and Haifa. This unique villa features elegant suites with balcony.
Tropki.ru — путешествия и отелиповсемумиру” 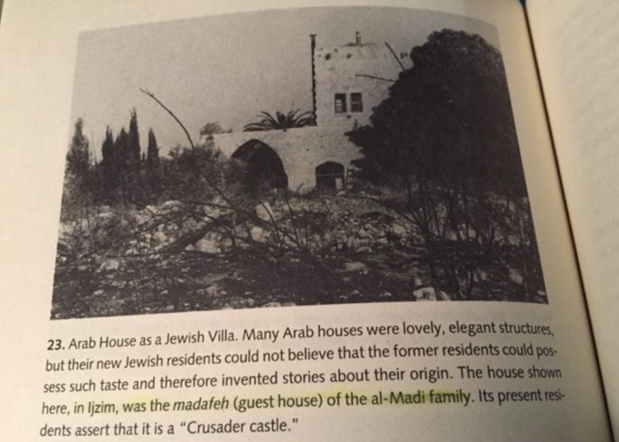 My family’s guest house in Ijzim, Haifa, now in the possession of Jews (MeronBenvenisti’s Sacred Landscape; The Buried History of the Holy Land Since 1948) (Source: author)

Displaced Palestinian Arabs in Nazareth can see and touch their village lands or property in:

“Maalul, Christians displaced to nearby Nazareth have carved a path through the forest of pine-trees that were planted to hide it, and have cleared the bracken to expose two churches, one Greek Orthodox, another Catholic, where they have begun celebrating festivals such as Easter.”

If the above sounds fantastic to you when expressed in the way I am describing it, that’s because, incredibly, Israel’s hasbara project has efficiently kept the racist and apartheid nature of Zionism under the radar of most people’s consciousness.

That, coupled with the campaign to demonize Palestinian Arabs and the West’s collusion and active partnering with Israel to keep Israel Jewish, has resulted in Palestinians being deprived even of the right to have rights. [See “Right to Have Rights”: Partition and Palestinian Self-Determination]

Zionists’ spurious justification for keeping Palestinian Arabs who are now citizens of Israel away from their land and property is that, in essence, such property belonged originally to Jews (I suppose by divine edict), but the Muslim villains took it away, and now the Jewish state is making it available again to followers of all religions in the form of a park.

The comments section of the Economist article “Christians luckier than Muslims” I cite above (which, strangely, pops up separately and first when you google the article and appears to be a deliberate hasbara link) has this comment, as an example of such reasoning and justification:

You present the modern-day Jews of Israel as arrivistes that breezed in and “conquered” Palestine in 1948, arbitrarily renaming the one-horse Muslim village of Safuriya as Tzipori (“Christians luckier than Muslims”, June 8). But Tzipori came first: it is the birthplace of the Virgin Mary in Christian tradition and the remains of synagogues from before the birth of Muhammad can still be found there (despite centuries of Muslim efforts to eradicate all trace). The old Muslim village grounds are now a national park, where people of all faiths are free to pray.”

Nevertheless, the fact remains that the State of Israel has continually confiscated the land of Palestinian Arabs, both Muslim and Christian, demolished their homes and enforced their segregation, attempting to erase their identity and collective memory.

The self-justification for Israel’s theft, outside the hasbara justification above, is Israel’s legal system. Everything Israel does to Palestinian Arab citizens is legal — i.e., Israel’s discriminatory laws allow it.

The exact same Israeli legal justification process to judaize the West Bank is now taking place in Israel, even though it is against international law:

In 2017, the Israeli parliament enacted a law allowing the expropriation of private West Bank Palestinian land in order to retroactively “legalize” Israeli settlements.

The following paper, titled “From Arab land to `Israel Lands’: the legal dispossession of the Palestinians displaced by Israel in the wake of 1948” traces this legal justification and throws more light on the subject:

“… the Israeli government’s use of law to institutionalize the dispossession of Palestinian Arabs displaced by the 1948 war and trace the legal transformation of their land during the formative years of Israel’s land regime (1948–60).”

Rima Najjar is a Palestinian whose father’s side of the family comes from the forcibly depopulated village of Lifta on the western outskirts of Jerusalem. She is an activist, researcher and retired professor of English literature, Al-Quds University, occupied West Bank.