Prepare For Change
Home Awakening WHY FARMED SALMON IS ONE OF THE MOST TOXIC THINGS YOU CAN... 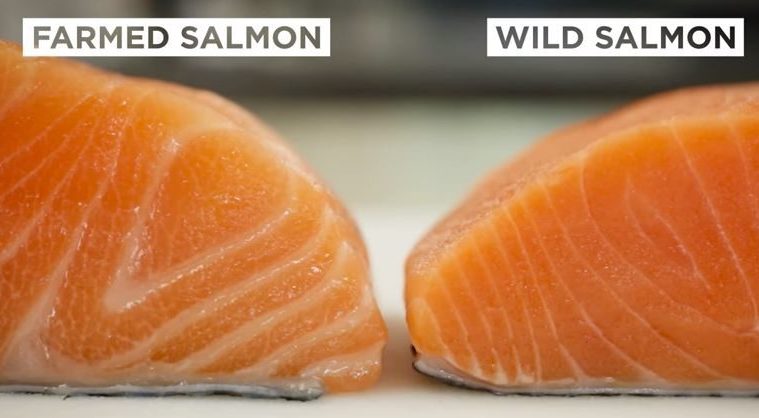 Fish has long been touted as a super food from doctors, nutritionists and specialists from around the world. Many people choose not to eat meat or other animal products, but show pride in their presumed health conscious decision to consume fish. But, as with almost everything else that is promoted heavily in the media, there’s something fishy about this…

There’s no denying that it contains many essential omega 3’s which are known to be good for your brain, many consider fish ‘brain food’ because of how essential these nutrients are for brain health. Unfortunately, farmed fish, particularly salmon and tilapia, are doing more harm than good and as awareness grows, many experts are now claiming for farmed fish to be one of the most toxic foods in the world.

What’s The Problem With Fish Farms?

Fisheries of today face a series of issues including overfishing, chemical pollution and even genetic mutation from toxic exposures. In Nicholas Daniel’s documentary, “Fillet-Oh-Fish” a critical eye is pointed at the fish farming industries across the globe and features exclusive, insider footage from fish farms and how they operate. According to the producers of the film, “through intensive farming and global pollution, the flesh of the fish we eat has turned into a deadly chemical cocktail.”

Unfortunately, Aquaculture often promotes itself as a sustainable solution to overfishing of the world’s oceans. The reality is that fish farms are actually causing more problems than they are solving and once again, it seems that turning a profit is more important to these corporations than actual sustainability or environmental concern.

The film mentioned above starts off in Norway, documenting the chemicals used in fish farms, Kurt Oddekalv, a respected Norwegian environmental activist, also believes that salmon farming is a disaster for human health as well as the environment.

Below the salmon farms of the Norwegian fjords is a layer of waste that is about 15 meters high and as you can imagine, it is absolutely teeming with bacteria, drugs and pesticides. Because these farms operate in open water the entire seafloor has been destroyed and the pollution created by these farms is not contained. A salmon farm can hold nearly 2 million fish in a fairly small space and because of these crowded conditions disease among the fish is rampant.

In an effort to stave off diseases various pesticides are used, and there is no doubt that if you’re eating this fish then you are also eating these pesticides.

Toxicologist, Jerome Ruzzin has confirmed some of the claims made by Oddekalv. Having tested a number of different food groups sold in Norway for toxins he has found that farmed salmon contains the greatest amount of toxins of them all, and to an extremely large degree. The farmed salmon was five times more toxic than any other food product that was tested. A study, which involved feeding farmed salmon to mice showed how the mice grew obese, specifically with fat around their internal organs and they also developed diabetes.

In recent years, the evidence that diabetes is caused by a lot more than just sugar, specifically toxic chemicals and air pollutants in the food we are consuming is coming to light and this case, we’re learning that salmon farmed in this manner will inevitably contain far more toxins than those in the wild.

Surprisingly, as pointed out in the documentary, the most significant source of toxic exposure to the fish aren’t even the pesticides or antibiotics, but the regular dry pellet food. This contains a whole slough of other toxic chemicals including dioxins and PCB’s, man these fish never stood a chance.

Literally, the list of everything that is wrong with the farmed fish industry just goes on and on, and if you would like to learn more about it I highly suggest checking out the documentary below.

Stop eating farmed fish at all costs! This is the single most effective thing you can do to save your health and stop this industry from polluting the oceans and our environment. if you haven’t decided to stop consuming animal products and still resonate with eating fish, stick to wild Atlantic salmon, Alaskan salmon (which is not allowed to be farmed) or pick up a new hobby and fish your own. You can tell the difference of farmed and wild fish by it’s colour, farmed fish tends to be very pale pink and wild caught is a deep red.

Wild caught salmon can be pretty pricey, so sardines and anchovies can be a good alternative for their nutritional value and level of sustainability. However, there are a number of plant-based alternatives that can give your brain what it needs without the risk of toxic contamination, these include, but are not limited to, walnuts, brussels sprouts, chia, hemp and flax seeds – just be sure to choose organic.

Saving a few dollars for cheaper fish just isn’t worth it and if you are out at a restaurant or eating sushi, make sure to ask if the fish is farmed and where it comes from. The only way to stop this industry in it’s tracks is to quit supporting it and quite frankly this should be made illegal and in all likelihood, as awareness grows about this massive issue, it is only a matter of time before this will happen.