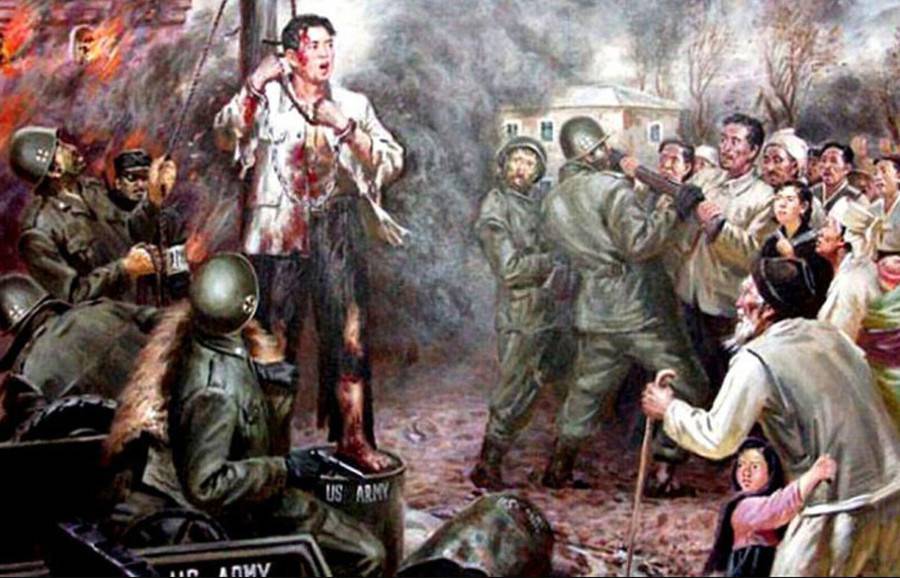 Koreans not only have good reason to view the US with suspicion and mistrust, it’s a miracle they don’t hate us for all eternity

With the world’s press spending a great deal of its energy on the rather fractious relationship between the United States and North Korea, a look back in time gives us some fascinating insight regarding the geopolitical stresses that rule the region, particularly the stresses that occurred during the Korean War.

Thanks to the International Action Center and the International Association of Democratic Lawyers (IADL), a Non-Governmental Organization which was founded in 1946 and acts as a consultative group to UNESCO, we have an interesting document that outlines some of America’s actions on the Korean Peninsula during the early 1950s.

In March 1952, the IADL issued a Report on U.S. Crimes in Korea during the Korean War.  Here is a screen capture showing the title page: 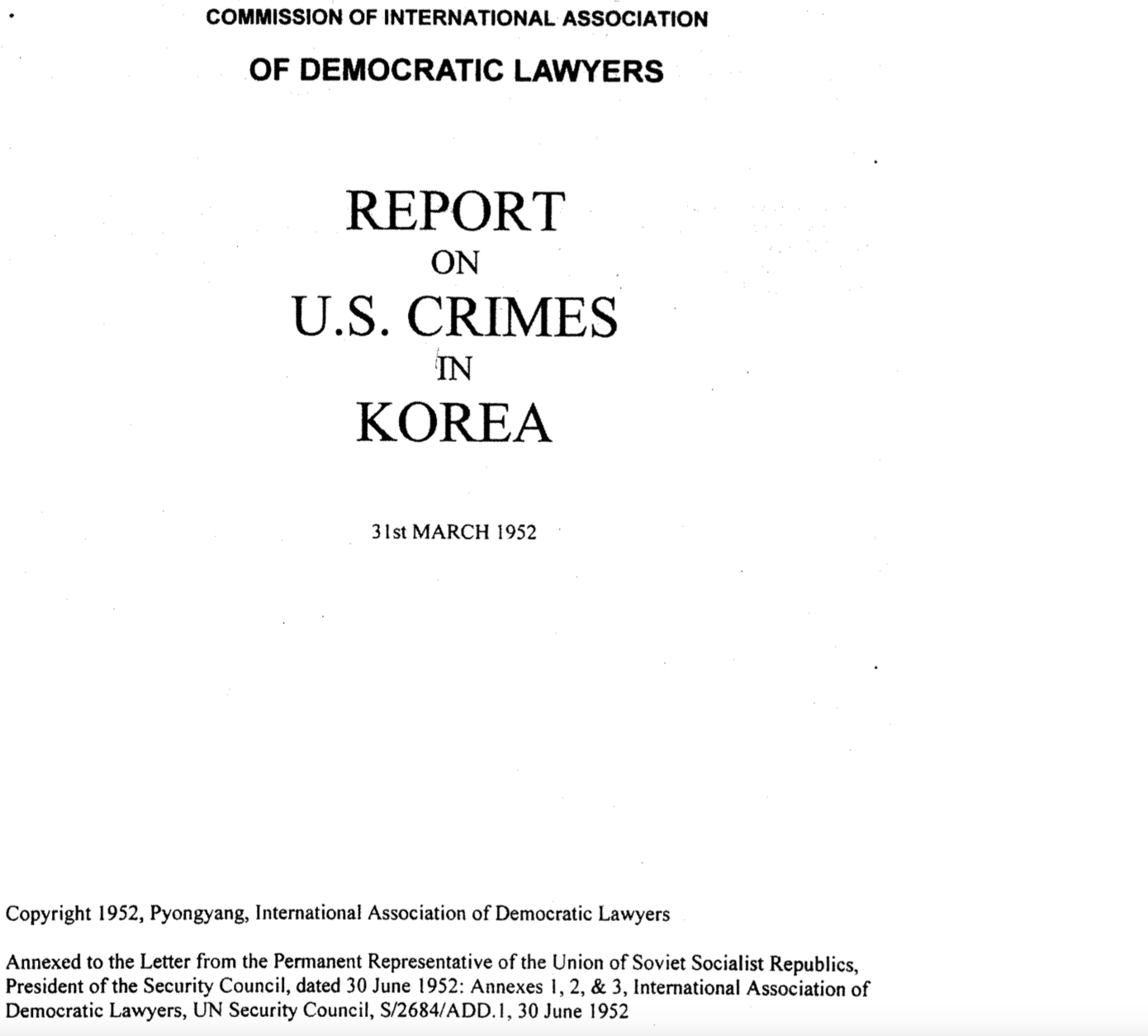 In the early 1950s, the Government of the Democratic People’s Republic of Korea repeatedly asked the United Nations to protest violations of international law by their enemies, the United States-led international coalition.

These requests were ignored by the United Nations and, as such, the Council of the International Association of Democratic Lawyers set up a Commission consisting of lawyers from several nations to investigate these allegations with a “boots on the ground” trip to Korea which took place from March 3rd to March 19th, 1952, visiting the provinces of North and South Piengan, Hwang Hai, Kang Wan, including the towns of Pyongyang, Nampo, Kaichen, Pek Dong, Amju, Sinchon, Anak, Sariwon and Wonsan among others.

Here is a list of the lawyers that saw first-hand what had occurred in the DPRK:

The IADL notes that, under United Nations rules, the U.S. intervention on the Korean Peninsula was unlawful and that President Truman’s orders to the American Navy and Air Force should be considered an “aggressive act” that went against the United Nations Charter.

Here are some of the more interesting findings of the IADL Commission:

The Commission investigated the allegations that American forces in Korea were using bacteriological weapons against both the DPRK armed forces and the nation’s civilian population.  Between the 28th of January and the 12th of March (i.e. during the dead of winter), 1952, the Commission found the following insects which carried bacteria in many different locations:

The Commission noted that many of the insect species had not been found in Korea prior to the arrival of American forces and that many of them were found in mixed groups or clusters that would not normally be found together, for example, flies and spiders.

It also noted that the January temperature was 1 degree Celsius (just above freezing) to 5 degrees Celsius in February but that the prevailing average temperature was far below the freezing level, temperatures that are extremely hostile to insect life.

The insects were infected with the following bacteria which include plague, cholera and typhus:

Here are some examples of what was reported by local citizens: 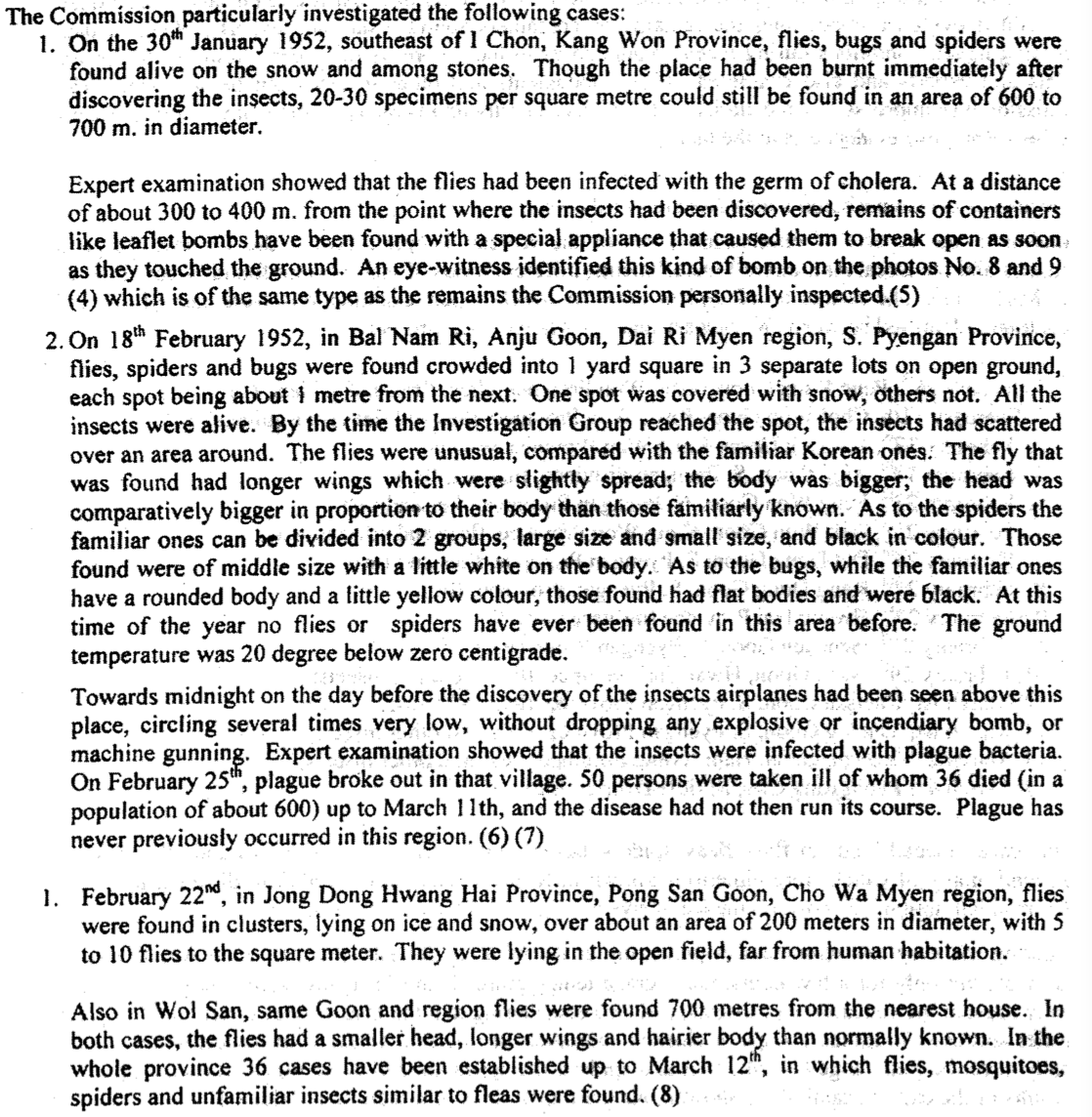 In addition, a great quantity of fish of a species which live in regions between fresh water and salt water were found; these fish were found in a half rotten state and were infected with cholera.

On various occasions since May 6th, 1951, American planes used asphyxiating and other gases or chemical weapons as follows: 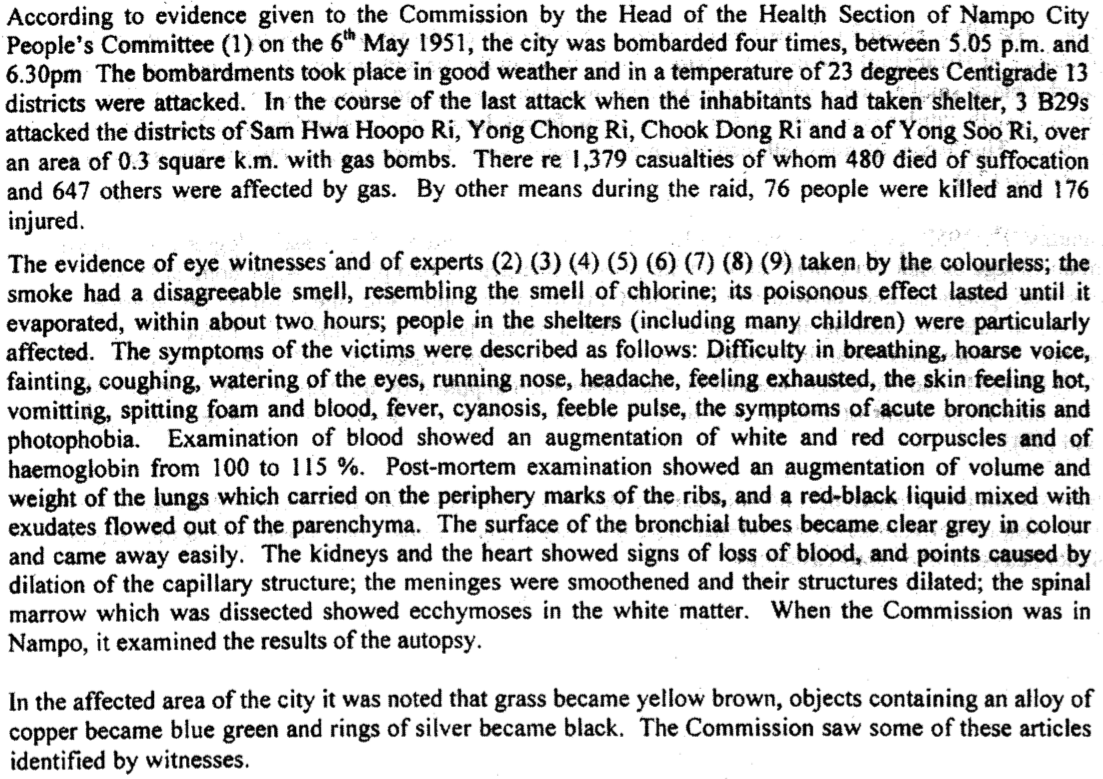 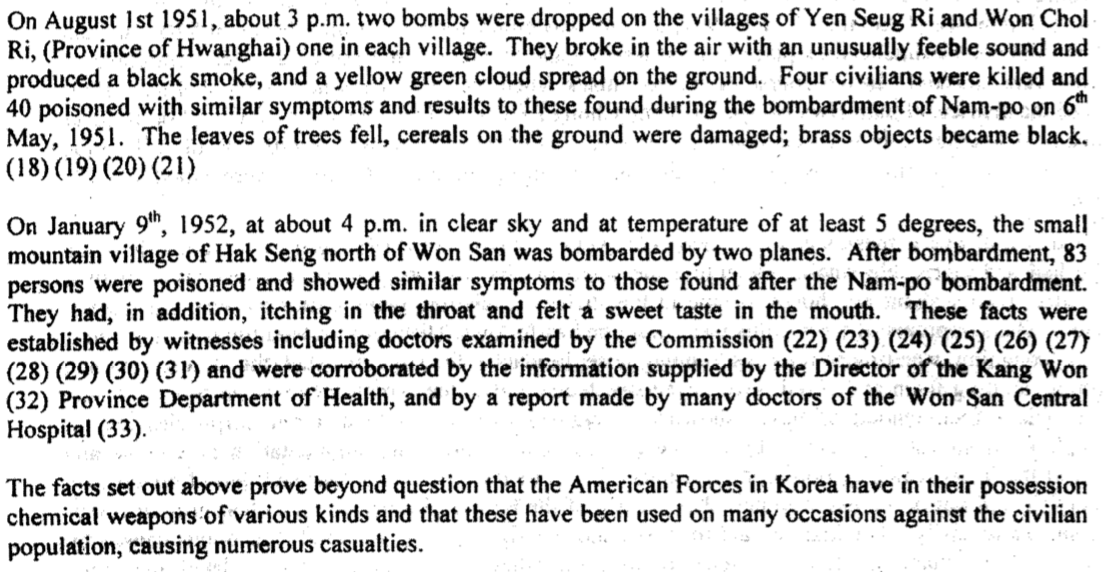 In the first attack on Nampo City, there were 1,379 casualties of which 480 died of suffocation and 647 others were affected by gas.

According to witnesses, the commander of the U.S. Forces in the region of Sinchon by the name of Harrison ordered the mass killing of 35,383 civilians (19,149 men and 16,234 women) during the period between October 17th and December 7th, 1950.

The civilians were pushed into a deep open grave, doused with fuel oil and set on fire.  Those who tried to escape were shot.

In another case, on October 20th, 2015, 500 men women and children were forced into an air raid cave shelter located in the city of Sinchon.  Harrison ordered American soldiers to put explosives into the shelter and seal it with sacks of earth prior to the fuse being lit.

Here are other examples of mass murders: 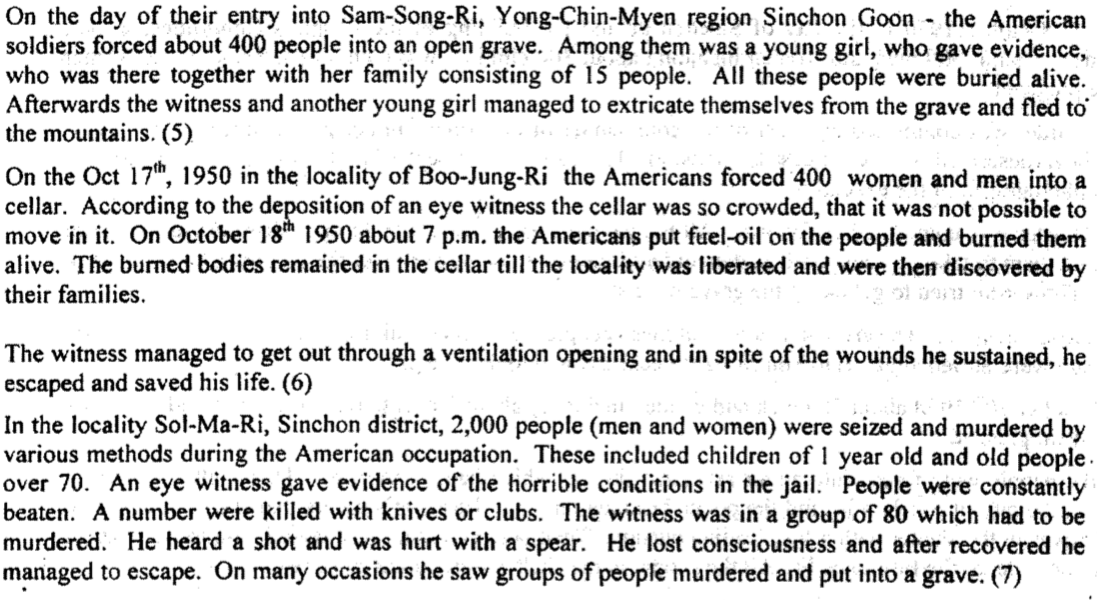 Here is a description of one of the aerial bombardments of Pyongyang:

Here is the conclusion of the Commission: 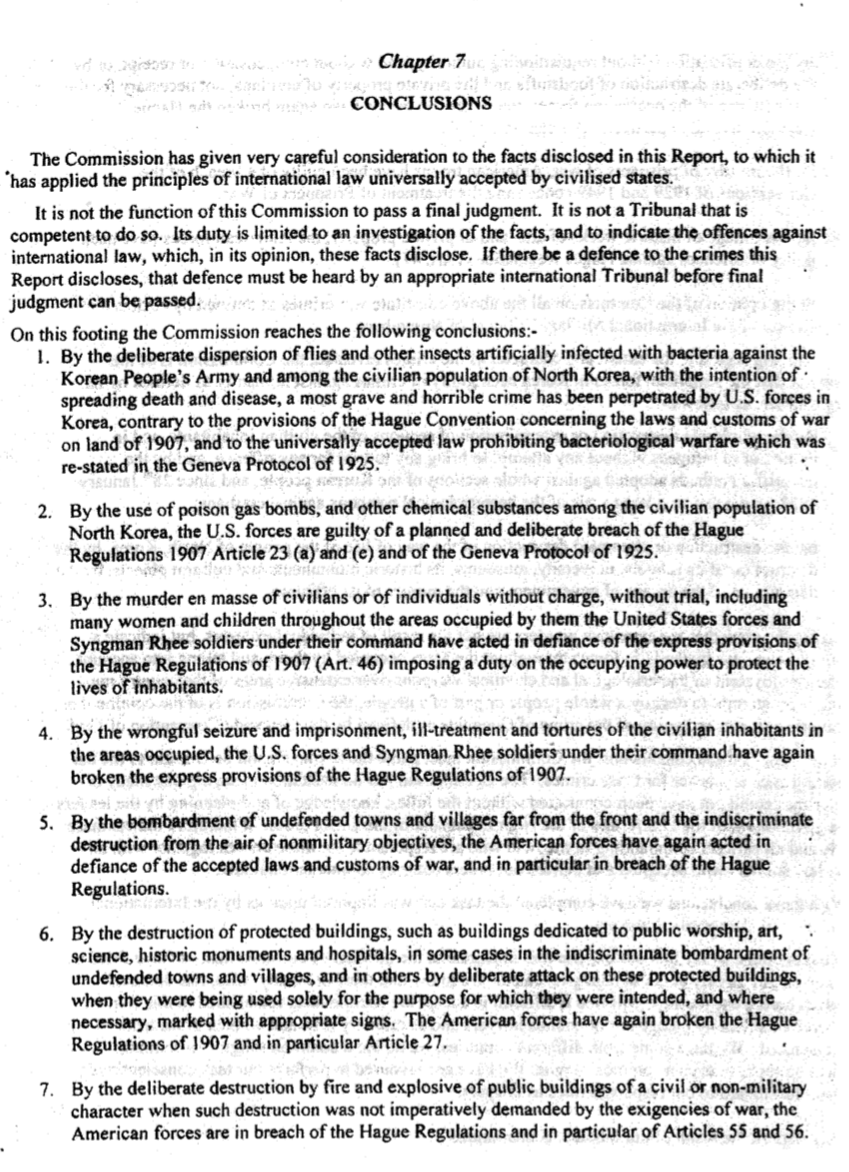 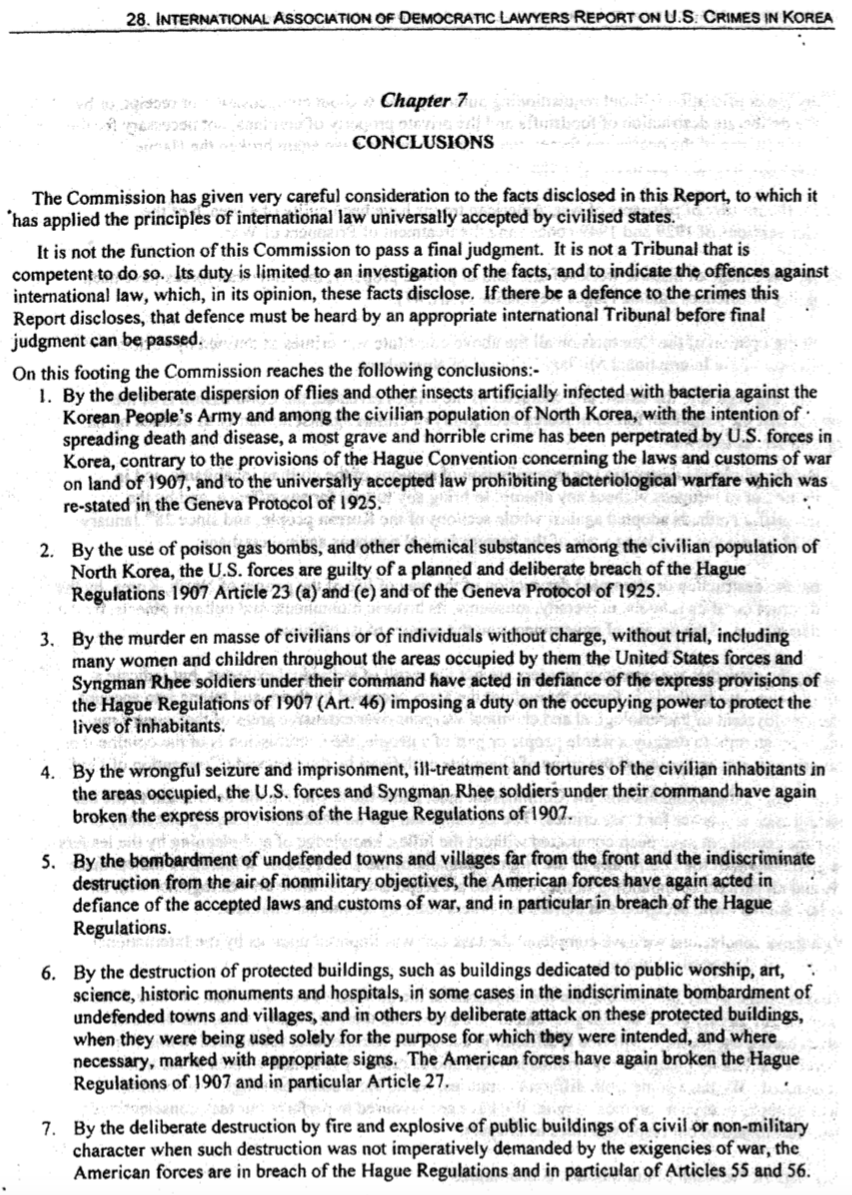 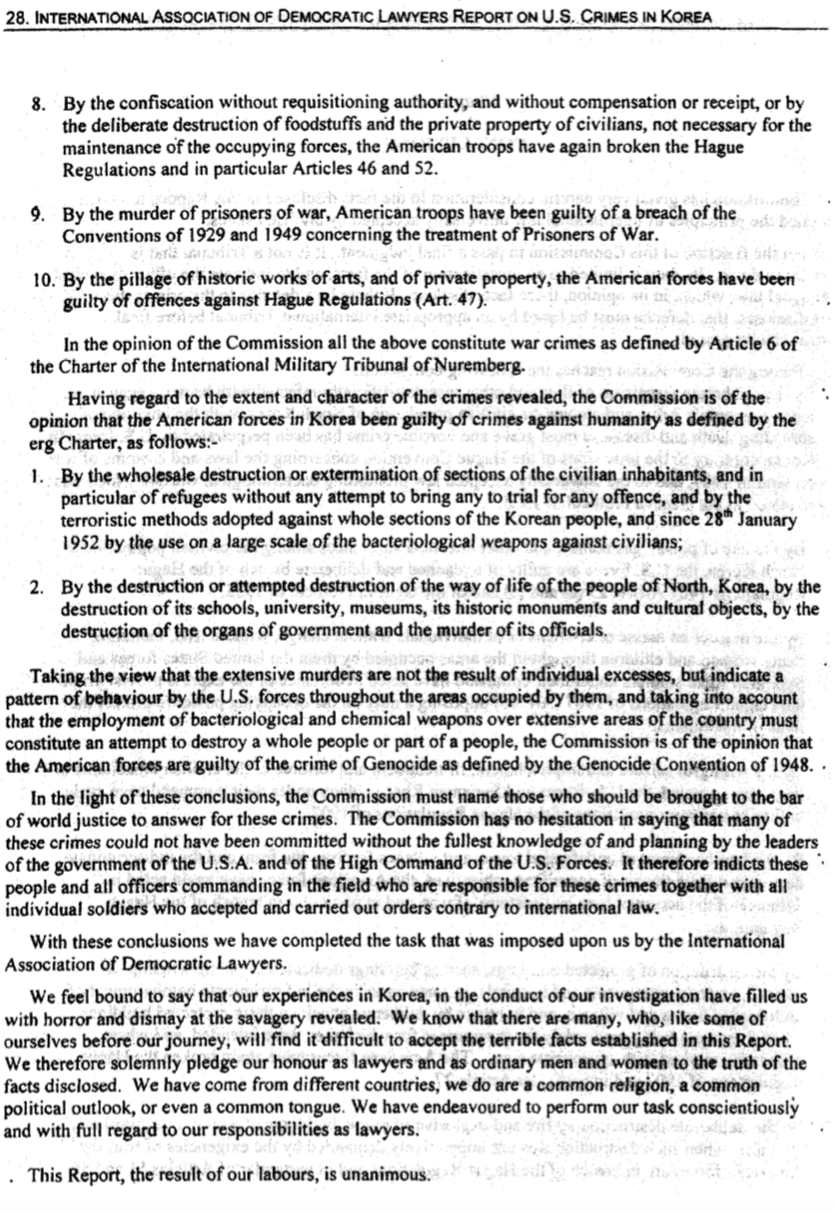 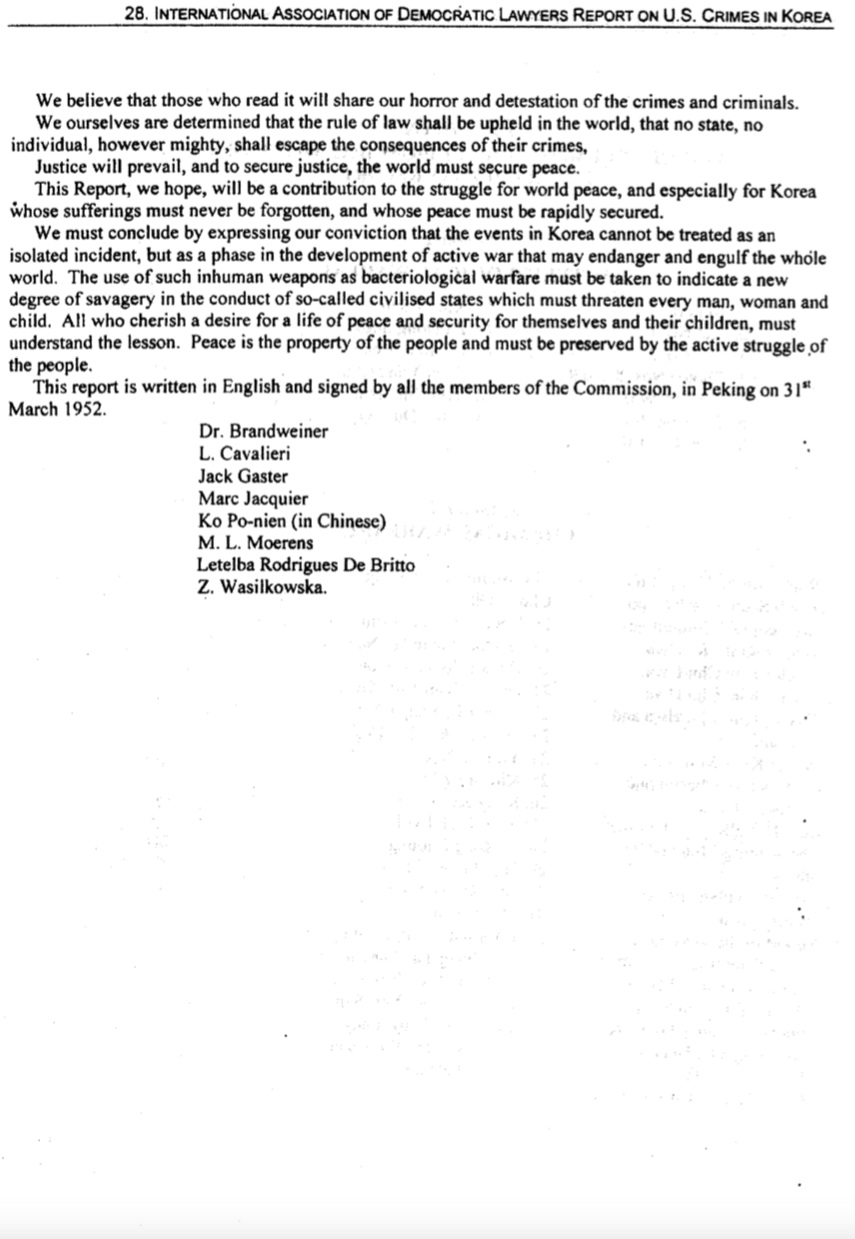 The IADL Commission unanimously found that the United States was guilty of crimes against humanity during the Korean War and that there was a pattern of behaviour which constitutes genocide.

Let’s close this posting with the conclusion of the 2001 Korea International War Crimes Tribunal which examined the testimony of civilians from both North Korea and South Korea over the period from 1945 to 2001:

The Members of the International War Crimes Tribunal find the accused Guilty on the basis of the evidence against them: each of the nineteen separate crimes alleged in the Initial Complaint has been established to have been committed beyond a reasonable doubt. The Members find these crimes to have occurred during three main periods in the U.S. intervention in and occupation of Korea.

In all these 55 years, the U.S. government has systematically manipulated, controlled, directed, misinformed and restricted press and media coverage to obtain consistent support for its military intervention, occupation and crimes against the people of Korea.

It has also inculcated racist attitudes within the U.S. troops and general population that prepared them to commit and/or accept atrocities and genocidal policies against the Korean people.

It has violated the Constitution of the United States, the delegation of powers over war and the military, the Bill of Rights, the UN Charter, international law and the laws of the ROK, DPRK, Peoples Republic of China, Japan and many others, in its lawless determination to exercise its will over the Korean peninsula.

The Members of the Korea International War Crimes Tribunal hold the United States government and its leaders accountable for these criminal acts and condemn those found guilty in the strongest possible terms.” (my bold)

And Washington wonders why the North Koreans are so hostile toward the United States!

The irony of Washington’s criticism of other nations (i.e Syria) and their use of chemical weapons is stunningly hypocritical.