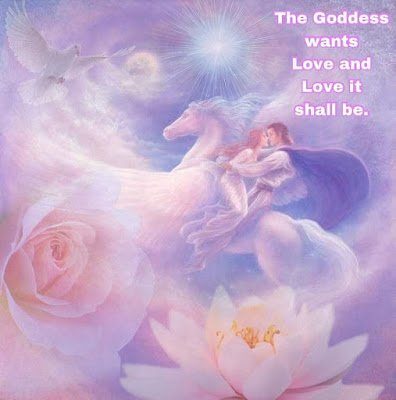 This is the last of the “social dynamics” articles, which the Pleiadians have requested to be posted as part of preparation for the Ascension process. I have received clearance to release some “other” intel shortly after July 13th.

Since the fall of Atlantis, priestesses of Astara were preserving the mysteries of Sacred Union on the surface of the planet:

And inside the Agartha network:

Later, in post-Atlantean period, Sacred Union between the king and the high priestess has created resonance waves of harmony for the whole kingdom the king was the ruler of.

High priestesses of the Goddess were also able to heal the war trauma of men:

Or heal the women:

As we are approaching the moment of Compression Breakthrough, some of the most awakened priestesses will start using the energy of Sacred Union to heal others and to channel Goddess energies into the planetary Light grid.

Since the Kurgan Archon invasion more than 5000 years ago, the Archons are using etheric and plasma scalar technology to disrupt Sacred Unions. These disruptions are the source of most drama in love relationships.

They are then harvesting the psychic energy of those disruptions and are funneling it into Hassuna-Samarra vortex, which they are actively suppressing for millennia by creating wars in the region.

Their second method is to switch one of the pair off ad thus create great emotional pain for the other:

Their third way is to induce possessiveness, and create jealousy dramas.

Their fourth way is to use isolating scalar fields to disconnect people from each other.

Their fifth way is to create women physically passive, so a woman can never physically approach a man.

Their sixth way is to create men emotionally passive.

Their seventh way is to induce twin soul fantasy, when someone is projecting an idealized image on a partner.

And if nothing else works, they tend to kill happy couples with directed energy weapons:

Regardless of all programming attempts, the Light is pouring through the cracks in the Veil, and the Pleiadian fleet is supporting Sacred Union with the force of their spiritual Love.